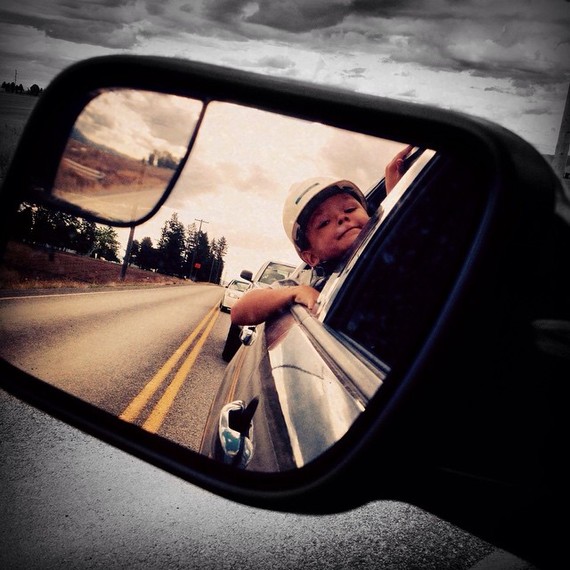 Standing on the bottom step of the ramshackle porch outside my single-wide trailer, beer in one hand and cigarette in the other (side note: I quit smoking almost a decade ago), our conversation rambled from one topic to any number of unrelated others. It was me, my wife, and one of my good friends from college, who was in town to visit, and we were getting together at my place for a weekend of debauchery, which sounds much cooler than it really was. In reality, all we did was network our computers together to play first-person shooter games, drink cheap beer (since it was all we could afford at the time) and bond over the experience.

As the wind chill cut through the haze of smoke, I listened to my friend rattle off another story about what was happening back in the old college town, when suddenly, he stopped, mid-sentence, and said, "You know, Josh, I hate it when you do that."

My mind was shaken off track, as I was taken aback by the sudden critique. "Hate what, exactly? What did I do?"

"You do it all the time," he continued, "I can tell that you've checked out of the conversation and now, you're thinking of the next thing you want to say."

I was shocked and bewildered. "No I wasn't," I persisted!

"Yes, actually, you were," he snapped back. "You get this glazed-over look in your eyes. Happens all the time, man."

Still confused, I turned to my wife for support, only to be met with her nodding head and a quick, "Yep. He's right. You do it all the time."

Thinking of a quick comeback, I fired off the only thing I could muster, "If I do it all the time, why is this the first I'm hearing of it?"

My friend was the first to speak up, "Because whenever anyone criticizes you, you get all defensive. You're kind of an a**hole, man."

Ouch. That remark cut deep. Turning again to my wife, her head still nodded in agreement, as she remarked, "True story. You really are a jerk when criticized."

For the remainder of the evening, their concerted attack on my identity was all I could think of. Had I really been like this all my life? If they knew, but didn't want to tell me, how many other relationships had failed because of this? I decided that the next morning, I was going to find some answers, so I called the friend who had known me the longest, only to be met with the exact same reply.

This newfound truth rocked me to my core, and not in that hyperbolic hipster sort of exaggeration that is so prevalent in today's social media. I was facing a side of me I never knew I had. From that point forward, I started paying more attention to the sound and tone of my words, particularly when being criticized, whether large or small, and sure enough, criticism was my trigger to turn from Dr. Jekyll into Mr. Hyde. And boy, was it ugly.

What I had experienced in this tale was opening myself up to what is called the blind spot. In communication studies, we frequently reference the Johari Window, a concept that suggests we have four areas of our identity: a public self that is known to ourselves and others, a private self known only to us, an unknown self that is neither open to the public nor us and a "blind spot," which is that which others know about us that we are not yet aware of ourselves.

A blind spot can be dangerous. A blind spot, as in my case, could be the potential cause for many a failed relationship. For the better part of my young adult life, I could not, for the life of me, figure out why I was driving people away after a certain and consistent amount of time in a relationship, but once I learned about my ego defensive tendencies, it all became clear. A blind spot is also dangerous because of its power over our subconscious behaviors, to the point where, as the blind spot is discovered, it could present a serious threat to one's identity. If we are not flexible and resilient enough to face the impending change presented by learning of the blind spot, we may very well build up walls to keep others away.

Within the context of many of my communication courses, I have the following activity as an assignment in confronting potential blind spots:

Contact a close friend, family member, or mentor, but I suggest someone who knows you well, and invite this person to share a meal with you. During the meal, ask this person to share with you the one thing that annoys her or him most about you. Before the response, tell the person that nothing is off-limits and that you are not allowed to respond defensively -- only to listen with an open heart and mind.

As you can imagine, this is a gut-wrenching, potentially life-altering exercise in self-awareness.

First of all, the other person is someone important in their lives, so the opinion matters a great deal, presenting a threat to the asker in the exercise, because, what if the other person reveals something Earth-shattering? How might we see ourselves differently after that moment, knowing that something potentially serious bugs one of these people who matter most to us?

Second, not being allowed to defend oneself during the exercise opens the other person up to being more honest and forthright, but it also causes the asker to listen more deeply. Rather than listening and gathering information to use in a strategic defense of the ego, the asker must sit and dwell on the information, looking at it in terms of the other person, which is the core of empathic listening.

In the near-decade that I have been employing this exercise, I have heard a wide array of responses reported from people taking part in it, but never once have I heard someone come back from the activity with anything but a profound learning experience. Allowing others to shine a light on our blind spots, particularly with respect to our faults, teaches us how to become better conversationalists, better listeners, and ultimately, better people in general. What we learn about our blind spots may not always be pleasant, but it can open up a whole new world we never even knew existed.

A few months ago, I assigned this exercise to a class, and as always, I would never ask them to do something I wouldn't be willing to do myself, so I partook in the exercise as well. This time, I asked my two youngest children the question, on the drive home from school. They hesitated at first, but then they spoke, openly and comfortably with me:

From my 7-year-old son: "It makes me sad when you yell at me, Dad. It makes me feel like you don't love me anymore, and it makes me want to go hide in my room."

From my 10-year-old daughter: "I don't like it when you get mad at me, either. It hurts me and makes me cry. I don't want to make you mad."

At that point, I couldn't concentrate on the road, so I pulled the truck over, and on the side of road, unbuckled my seat belt so that I could hug them both, embracing them tightly. Swept up by a moment of pure clarity and raw openness, we starting crying, which then erupted into sobbing together for what felt like an eternity.

Slowly, as we calmed down, I pulled away so that I could see their faces. Wiping my eyes and theirs, I replied, "I'm sorry. I didn't realize I had been yelling so much lately, and even though I get frustrated with you two at times, I don't want you thinking I'm mad at you. I promise that I will do better."

I could have told them that my yelling had a purpose.

I could have brought up all the fights they had, all the times they forgot their chores, all the things they've broken, and any of the other plethora of mistakes they've made.

Instead, I gave them their moment to vent.

Instead, I gave them the gift of listening without judgment.

I did this in an effort to teach my children humility through example, to show them that it is possible to hear others' critique, absorb it, and then actually do something to change that which necessitates change out of a spirit moved by love.

But mainly, I did it because, as with the first time I confronted the demon in my blind spot, it wasn't so much that I cared about what others thought of me, but how I saw myself reflected back.