If planet Earth went to see a doctor because of its persistent and growing fever, the results would likely be: (i) the symptoms are clear: the planet's temperature and atmospheric carbon dioxide are increasing; (ii) the diagnosis would be that these two things are linked and human activities are causal; (iii) the prognosis would be an outlook for more warming at rates that can be disruptive and will cause strife; and (iv) the treatment is "mitigation" which means reducing fossil fuel use to lower carbon dioxide emissions, and "adaptation" which means planning for the consequences.

Patrick Daniel Moynihan once famously said "You are entitled to your own opinion but not your own facts." In reality we have many facts and physical understanding with regard to the changing climate. The interpretation of the available information relies on well-established physical principles. The data are of mixed quality and length but together they tell a compelling story leaving no doubt whatsoever about the human role in climate change.

Yet a recent report that examined sixth grade textbooks in the U.S. found that climate change was addressed as if it were opinion, not fact. Rather that showing the clear evidence that climate change is not only really happening, and that humans use of fossil fuels are the dominant cause, the textbooks make widespread use of wimpy words like "could," "may" or "might" that emphasize the uncertainties behind climate change, while definitive words such as "find," "determine," "measure" and "obtain" are less frequently used. The most frequently used word associated with scientists is "think." The message communicated in the textbooks is that climate change is possibly happening, that humans may or may not be causing it, and that it is unclear if we need to take immediate mitigating action, the researchers found. Far too many politicians treat climate change this way as well.

In reality, there are many facts underlying the understanding of climate change. The evidence is abundantly clear from observations and their analysis. But the facts are not enough. The role of scientists, such as myself, is to lay out the facts and the prospects and consequences, but the decision on what to do about them is not ours; that involves everyone. Hence value systems, equity among nations, equity across generations, vested interests, the precautionary principle, ideology, and many other factors come into play to decide whether to do nothing and suffer the consequences, or take action. Pope Francis' 2015 encyclical "Laudato Si" (Praise Be to You) highlights the ethical nature of the problem. "Climate change is a global problem with grave implications: environmental, social, economic, political and for the distribution of goods. It represents one of the principal challenges facing humanity in our day."

Some people may take a wait-and-see attitude, but scientists know that by the time the adverse effects of climate change are so obvious to everyone, it will be far too late to do anything about them. Carbon dioxide from burning fossil fuels has increased by over 40 percent in the atmosphere (most of the increase is since 1960), and has a long lifetime -- in fact centuries. The climate system, especially the ocean, responds very slowly. Global sea level is rising at a rate of well over a foot per century. Moreover the infrastructure related to the energy sector takes a couple of decades to change substantively. All of which means that actions taken now have their main effects 50 years from now and beyond.

Science knowledge is going in one direction while some political views are going in another. Jørgen Randers, a professor of climate strategy at the Norwegian Business School in January 2015 concluded that "it is profitable to let the world go to hell", and so the private sector will not solve the problem without strong incentives. The report "Risky Business: The Economic Risks of Climate Change in the United States" co-chaired by Henry Paulsen and Michael Bloomberg in July 2014 concluded that "...taking a cautious approach, waiting for more information, a business-as-usual approach, is actually radical risk taking." But "...if we act now the U.S. can still avoid most of the worst impacts and significantly reduce the odds of costly climate outcomes -- but only if we start changing our business and public policy practices today..." "The longer we wait to adapt to and mitigate climate change, the more devastating the economic impacts will be."

My own view is that users should pay: there must be an appropriate price on carbon and a removal of the substantial subsidies for fossil fuels that currently exist. The atmosphere is a global commons (and dumping ground) and the solution is that people of the world must work together to save us on our "spaceship Earth." There is much that can be done and with the right incentives in place, the private sector would become fully engaged in the solutions.

To view a larger version of this graphic, click here. 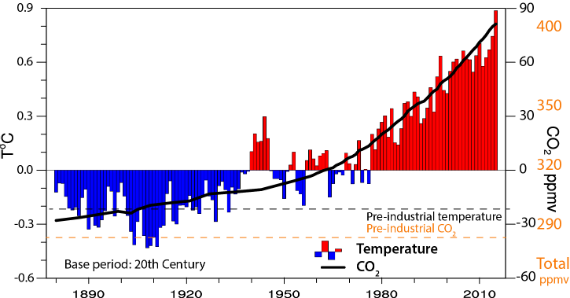 Time series of annual values of global mean temperature anomalies (red and blue bars) in degrees Celsius, and carbon dioxide concentrations at Mauna Loa, both from NOAA, relative to a baseline of the 20th Century values. Also given as dashed values are the pre-industrial estimated values, with the scale in orange at right for carbon dioxide, where the value is 280 ppmv (parts per million by volume). The latest October 2015 values exceed 400 ppmv. For temperature, the 2015 value is based on observations through October 2015 and estimated for November and December based on the October anomaly. Values are more than 1 C above pre-industrial levels. (Thanks to John Fasullo who helped with this figure).

This post is part of a "Voices from the Lab" series produced by The Huffington Post, in conjunction with the U.N.'s 21st Conference of the Parties (COP21) in Paris (Nov. 30-Dec. 11), aka the climate-change conference. The series will put a spotlight on environmental scientists and their perspectives on climate change, and is part of HuffPost's What's Working editorial initiative. To view the entire series, visit here.