In recent years, several writers have offered Orwellian predictions about the future of animal agriculture.

"In the future, there will be a new large scale type of commercial agriculture," predicts livestock scientist Temple Grandin. "During the next decade or two, billions of animals will live and die in factory farms," states philosopher Peter Singer. "I do not think factory farming is going away," says food industry writer Marion Nestle. "Our vast factory farms are the future," writes speechwriter Matthew Scully.

In September, Chipotle released a short, animated film called The Scarecrow, portraying a fictitious, "not-so-distant" future of meat production. The film shows that chickens, held captive in the hands of robots, are injected with a green liquid to balloon up instantly. Dairy cows are trapped in metal boxes in a factory farm located at the top of a skyscraper.

Chipotle's film is accurate in its general depiction of the future scale and structure of agriculture, but my vision of the future--developed over the course of visiting more than 60 animal farms in eight countries--differs in some respects. Looking to 2050, I believe that animal farms will not be located on the roofs of buildings, but will be multi-storied buildings themselves. They will not be managed by mankind, but by mobile devices.

The future of animal agriculture can be summed up in a single sentence by, appropriately, a science fiction writer. "The future is already here," said William Gibson, "it's just not very evenly distributed."

At a dairy farm where I stayed in New England, a poem titled "Down on the Farm" hung on the upstairs living room wall. "Out of the yard, I run like the dickens, To milk ten cows and feed the chickens, Clean out the barn, curry Nancy and Jiggs, Separate the cream and slop all the pigs..."

The farms of the past resembled the scenes in the poem--pastoral, picturesque. The farms of today are, in contrast, large and industrial. Animals have moved definitively from the outdoors to the indoors. Artificial light has replaced sunlight, and exhaust fans have replaced windows. Concrete floors have succeeded grass ranges, and metal doors have supplanted fence gates.

Scale has become synonymous with survival. More than half of the world's pork and more than two-thirds of the world's chicken and eggs are today produced industrially. The average pig farm in the United States had 10 pigs in 1935 and 100 in 1980--today, it has more than 5,000. The average American egg facility confines more than 100,000 hens in cramped, stacked cages.

A chicken facility I visited in Canada, built 10 years ago, consisted of two floors, each containing 20,000 chickens. Even in developing countries, some poultry farms are rising to two stories, as I saw firsthand on the island of Bali in Indonesia. At least 15 pig farms in the Netherlands consist of two stories.

As land prices around the world continue to rise, it will become increasingly economical for producers to build farms taller rather than longer. Today, most animal farms are single-story; in 2050, most will be multi-story. 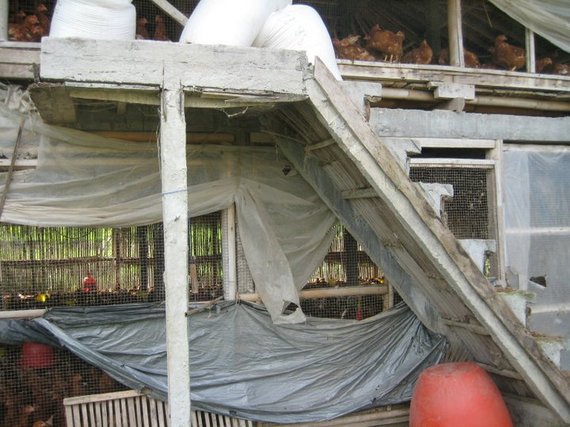 The number of people working on farms has fallen everywhere in the last half-century. In the United States, just one worker can be responsible for 200,000 egg-laying hens and 8,000 pigs. "The United States now has more prison inmates than full-time farmers," wrote Eric Schlosser in Fast Food Nation.

Fifty years ago, animals were fed and tended by people; today, these tasks are performed by machine and phone. Smartphones turn lights on and off, lock and unlock buildings, and track feed and water intake. Farmers can choose between Apps with names like Cattle Breeding Calculator, Pro Dairy Event, and Pork Production.

A chicken farmer I met explained to me that he no longer enters any of his four facilities; he merely dials a phone number to obtain automatic updates on them. This suits him because he has asthma, and the toxic ammonia fumes emanating from manure can kill him. But though his health is improved, the health of his chickens is worsened: he no longer has any incentive to make their environment more livable (by, for instance, reducing crowding or improving ventilation).

"Mobile monitoring of all aspects of farming can only grow," predicts a report on phone farming prepared by a mobile learning company.

Stay tuned for the next article, about two more trends affecting animal agriculture. What do you think they are?

Factory Farms William Gibson Future Scarecrow Food For Thought
This Blogger's Books and Other Items from...

Project Animal Farm: An Accidental Journey into the Secret World of Farming and the Truth About Our Food
by Sonia Faruqi