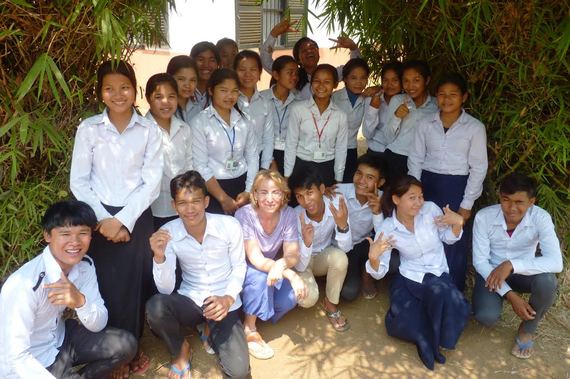 Sue Guiney consciously wades into love's ruin illuminated by emerging light. A palette that formerly reflected obscenity's apex now reveals the beautiful, gracious landscape of Cambodia. Her colors are the children of the unbowed who survived the arbitrary betrayal of reason. She has merged with that culture's heroic attempt to open love's third eye when not long ago frozen tundra ruled the sun in the form of Pol Pot, Hitler's offspring. Ms. Guiney is transparent. Shadows flee before her heart.

Ms. Guiney gently elicits a child's imagination steeped in the breath of Cambodia. Their lives are source material. She helps them write poetry and stories that lay dormant within their hearts. The language is English. It is the language that they will need to live in order to master their economy. The program is called Writing Through Cambodia. They are empowered as they write prose and verse. They learn to ask and answer "why?" Imagining a new way of being, they blissfully inhale the lessons that Ms. Guiney imparts to them; these are children who joyfully walk with us as we pray there is not another Pol Pot incubating in the ruins of their ancestors. Their grandparents' terror rumbles in their DNA clamoring to emerge and climb Cambodia's elegant peaks. But it is always children in whom we place our hopes and dreams. That is our nature. Who dare resist optimism when staring into the eyes of an infant? If we do, we betray ourselves. Sue Guiney nurtures hope in a land that proves to us all that we are an amazing species, able to rise from the fires of despair.

Writing Through Cambodia started in a small school, the Siem Reap educational shelter, Anjali House. As darkness fled before joy and love, her program spread throughout Cambodia. Today, Writing Through Cambodia is taught in many Cambodian schools as well as NGO's based in that graceful dreamscape. Today, the seed that Ms. Guiney has planted is blossoming exponentially. One woman in one classroom believing in the power of her students is spreading throughout Cambodia. The glow of that creative blaze is attracting other countries throughout the region. Ms. Guiney trains staff throughout the world to build upon her modest vision that is now a grand window into the future.

Just one year ago (2013), Cambodia's citizens courageously protested their government's corruption and betrayal. Ms. Guiney encouraged her students to write about what they imagined could be. She played David Bowie's song, "Changes." Through this song, with fearless hearts they found freedom by sailing within to express possibilities.

Cambodia's stage still shudders at the misery most have lived. Ms. Guiney encourages the gift of expression by children of a traumatized society; she gives young people wings upon which they create poetry, prose. In this way they travel. One might assign heroic status to the people of Cambodia, but I am betting that what Ms. Guiney witnesses is the eternal human journey that keeps us going forward despite the insults of time. Is there anything more profound than that? It is ordinary, yet it elevates breathing to feats of magic.

Ms. Guiney says that she has lived her life as the perpetual outsider. Growing up protected, middle class on Long Island, being married, having children, loving her husband and children, an ex-patriot living in London for the last 20 years, she is still the outsider; the observer. Such is the stance of the writer; a conscious journey. However, when by chance she happened upon Cambodia's poetic tone, she suddenly felt at home. She was enchanted. No longer an outsider, but a part of the fabric. She knew quite well what had happened in that beautiful country many decades ago. She expected to find vestiges of trauma amidst society's rubble. She also found beautiful, peaceful children who yearned to discover more. She began to elicit their untold stories into the sun. The children of Cambodia are her benefactors. She receives their blessings. She told me that the predominant language in this elegant Buddhist country is a smile. I cannot conceive how smiles responded to the brutal darkness that descended upon their beings.

We walk amidst a constant reflection of war's obscenity. Through the dust of collapsed morality we occasionally glimpse the love pouring through our veins when we encounter for the first time a new life seeking our comfort our warmth. A newborn babe lifts a curtain so that we may see clearly. Sue Guiney recreates that first moment of life as she encourages Cambodia's children to unwrap their gifts. She is renewed as young eyes open wide, invite knowledge to sweep away fear and mistrust. Life consistently asserts its heart in a land where not too long ago, an entire generation was eliminated by the rigid shadow of Pol Pot's minions. It is said that one to three million people were killed or died as a result of severe abuse in a period of 4 years. That would be approximately 25% of the population vanishing in a sea of terror. How does a culture move on from that?

Sue Guiney knows a secret. Well perhaps it isn't quite all that hidden, but she knows it nevertheless. That is, whatever ails you, whatever afflicts your psyche and biology, ascending deep into one's soul to create form somehow always makes you feel better. Perhaps it was built into Cambodia's Buddhist life that allowed its people to come off terror's tightrope and move into the security of a quotidian meditative life. I don't know. But move they did. And onto this weathered path, their smiles returned. Ms. Guiney is an essential ingredient to that smile.
Sue Guiney's well-reviewed latest book is entitled "Out of the Ruins." It is a beautifully written novel informed by her experience of Cambodia and its people and the position of being an ex-patriot in a culture that should be completely alien, but in many ways is home. The title describes everything you need to know about a people's desire to survive. It is a universal wish to soar above the ruins.

And these children that you spit on
as they try to change their worlds
are immune to your consultations.
They're quite aware of what they're going through. 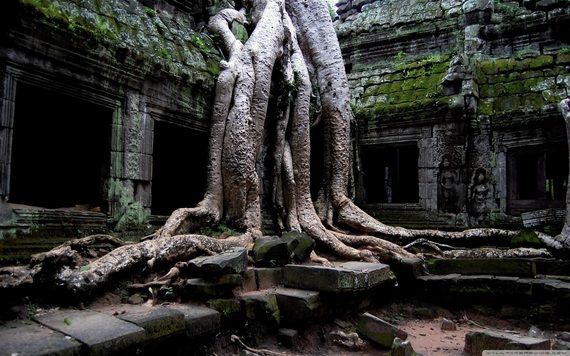