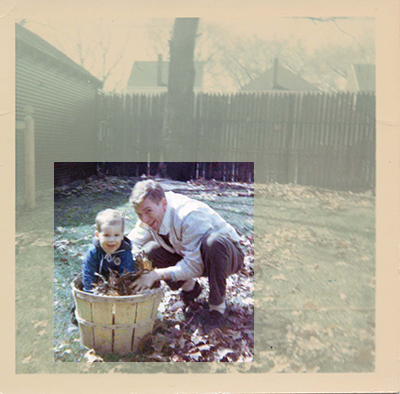 Take a minute and flip through your phone's pictures taken this Thanksgiving weekend -- now zoom in to something in the background. Do you notice anything interesting -- or something that might be interesting in a few decades?

The new Stephen Hawking biopic, The Theory of Everything, can drive you a little crazy if you are one of those people who needs to straighten a picture frame in a friend's house. Hawking's glasses are always crooked and always needing cleaning.

The color-correction folks in film know what they're doing when they choose their palettes. It's hard not to get nostalgic with a shot like above--and if you add in string instruments and piano you're already reaching for the Kleenex for memories you didn't even have. Flashbacks in film often have an orange or yellow tint to them and, like the world through Hawking's dirty specs, are generally fuzzy as well. I wonder who in Hollywood decided this was what nostalgia looked like. It might have started with someone sorting through an album for the 1960s, like I was doing the other day... 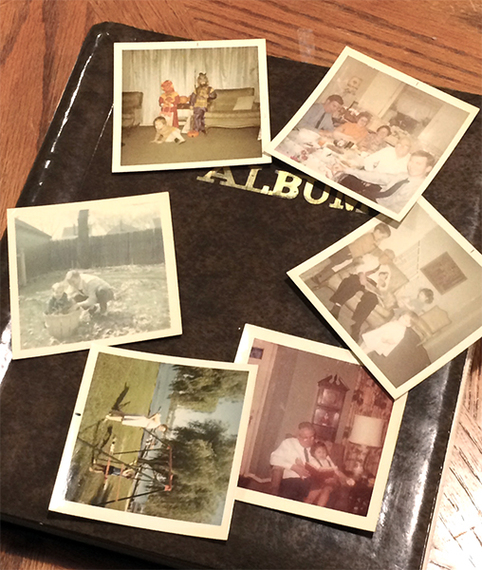 The Kodak Brownie's lens wasn't much for detail, but the colors have certainly gone their own direction over the last fifty years--some toward green, some red, most orange. I took the six of my grandmother's snapshots and scanned them, then used my favorite magic-button in all of software--Photoshop's Auto Tone and Auto-Color. Then some monkeying around with the vibrance, color balance, etc. and you get a much better view of me and my dad in our Detroit yard in 1966. 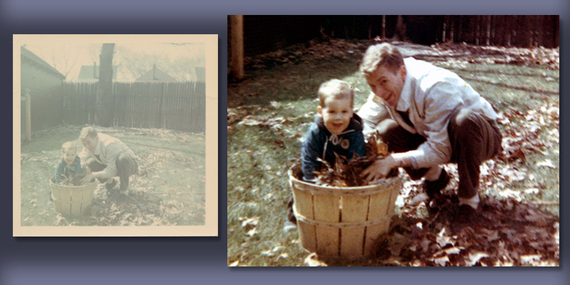 But the kicker for me, after the fun techy-stuff, is what is revealed. In a key moment of revelation, Hawking is stuck inside a sweater when his wife rushes to take care of the baby. In that short time, he sees the stove's fire through the pullover and discovers the universe. Nothing quite so dramatic with me and Photoshop of a tiny photo scanned double-large, but still I am able to see wonderfully triggered memories I didn't even know I had -- and certainly would have rushed past them flipping through the cellophane pages of my grandma's book--such as my dad's Hushpuppies, my favorite blue jacket with the baseball logo, the fence in the backyard with the alley with the barrel for burning leaves that I can still smell. My dad was just 26 years old in this picture.

Just around the corner from my parent's house on Ward Ave. was my grandparent's home on Littlefield for nearly 40 years. I still clearly remember sitting in the living room below waiting for my dad to finish mowing their lawn with the plug-in electric mower--I was watching Bugs Bunny cartoons on Saturdays until the Tiger game would start and my dad and his father would listen on the transistor radio while they had lunch.

In the picture below, Leon is reading to his first grandchild, my cousin Sharon. I sent her this picture and she and she believes that he was reading an adventure story to her. What I noticed, in addition to the lamp matching the curtains was the light switch that matched the wall completely--painted over or wallpapered? In front of the lamp was a handy yellow ashtray and glass of beer. Sharon's in the middle of an apple and behind them is a clock and statue of the Infant of Prague--both which are now in my dining room. 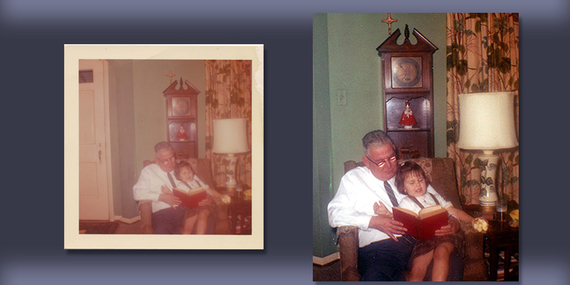 The kitchen of the Littlefield home was tiny but cozy at mealtimes. So many items below I would have missed, including the can of Hamm's beer, my grandma's constant supply of very white bread and meatloaf, the odd statue over my Aunt Rita's shoulder and my Uncle Jerry's cigar. My grandfather always had the thickest glasses and I never remember him smiling--but he was very funny. He died in 1977, after suffering his fourth heart-attack. In the picture below he is just 56. 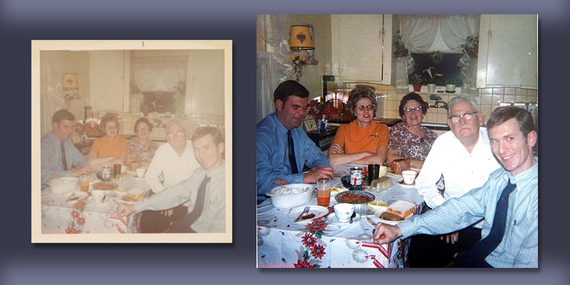 The china in front of my dad, from my grandparents 1932 wedding, is now in our dining room along with the clock. 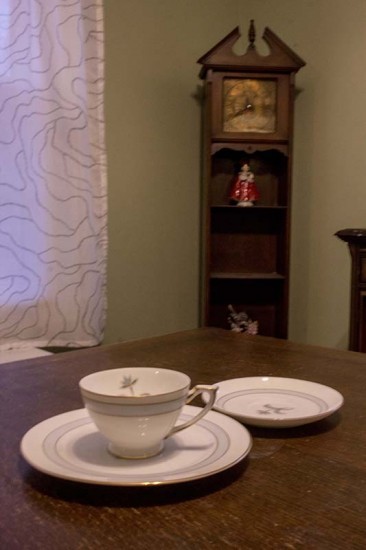 One week every summer we rented at the Al-Ray cottages on Lake Charlevoix, right beside the Ironton Ferry. My grandparents traveled with us occasionally and rented the neighboring place--it was pink, I clearly recall. In the days without car seats, bike helmets, before lead paint and tetanus were considered child-unfriendly, the swingsets below were common as my grandma clearly looks for a way out of pushing me for an hour or two. The large willows were ripped out to make way for a large marina and the wooden double-outboard in the background would be the smallest boat in sight. You can just make out the ferry's landing on this narrow arm of the lake. Each cabin had its own olive-green rowboat--and for $25 you could rent an outboard motor for it. 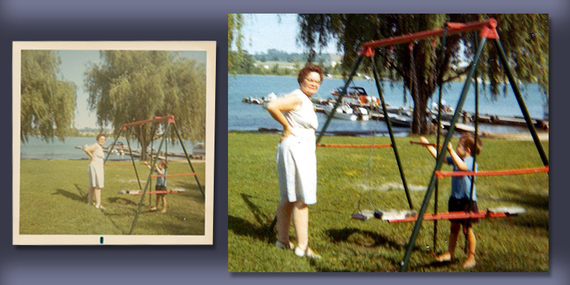 Back to Detroit for a couple of holidays. In another flashback to the days before peanut butter and latex were banned from schools, the following get-ups were commonplace. Katie is Hot Stuff, the little devil of Harvey Comics (I wonder how introducing a demon as a cartoon character would fly nowadays--let alone my politically incorrect getup as Shazzam--a comic book genie with the extra "z" to avoid getting sued by DC comics.) That's my sister Colleen on the floor, too young to hit the sidewalks and risk crossing the streets in the dark, as seen through the no-periphery eyeholes of the suffocating plastic--which I can still smell clearly! I think that there are some Golden Books on the table under the pumpkins as well. 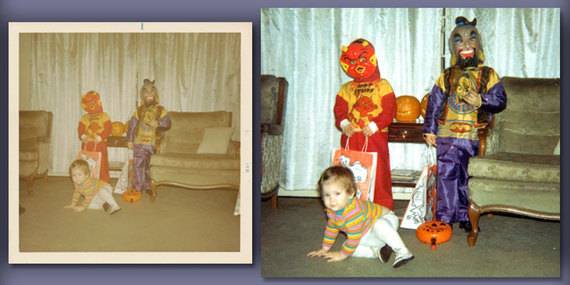 And I have to end with my ever-smiling grandpa in the last shot back at our Ward house--surrounded by the three of us at Easter 1970, just before we moved to Cincinnati. He's probably missing a Tiger game and forced to read me a book while holding Katie's balding doll. Who knows what Colleen's got in her hand and is ready to deposit on his nice dress slacks. My mom just looked at this photo and wondered where she and my dad got that painting of the woman playing the piano--and where it went. 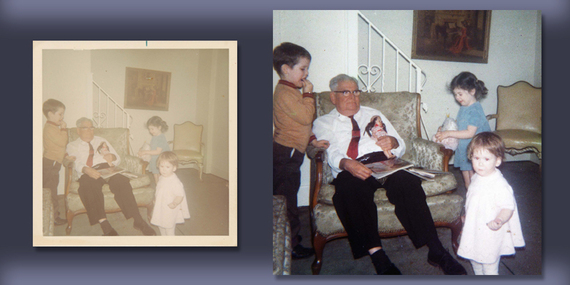 So if you're on your phone reading this, pop open that album and do some zooming for things that might kick in your kids' memories in 2064.