Visiting with street art collective Faile in their Brooklyn studio, we found the industrious duo at the center of a small cluster of assistants working on many simultaneous projects. 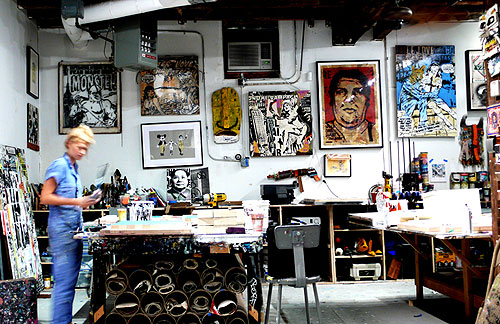 The air of collaboration is evident in this maze of activity -- as is an appreciation for process. The multilevel ex-industrial building has been reconfigured internally over the last decade to contain and accommodate the adventurous appetites of these childhood buddies, who took their street art from Brooklyn to the Tate, with many stops along the way. This doesn't happen for everybody, so in this first visit of two before their upcoming debut solo show at Perry Rubenstein Gallery in New York's Chelsea, November 4th, we looked for clues about the creative and working DNA of Faile. In the ten quick, long, rotten, beautiful years of this century, they've methodically plowed through many experiments, from simple, small one-color stencils on light posts to today's museum-quality, raft-sized wooden block collages that take months to screenprint, saw, sand, and assemble. 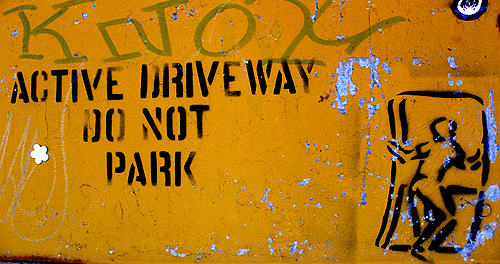 A small stencil on this sign was one of Faile's first in the late 90's early 2000's in Williamsburg, Brooklyn. (Photo © Jaime Rojo)

In a pretty remarkable run through the neighborhood and the globe, the two Patricks have used aerosoled stencils, screen prints, wheat pastes, roller tags, animated video games, carved wood, vinyl sculptures, spinning prayer poles, and even alabaster and tile reliefs in their ever growing collection of work. Cumulatively, the forays have given depth and resilience to their nearly iconic pop imagery. 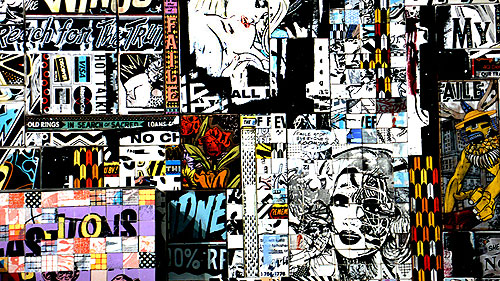 Since their mid-summer return from a Lisbon temple installation, where their piece -- two years in the making -- became a focal point for that city's first biennial, the Faile dudes are now making a multitude of these "wood paintings" here in their Brooklyn studio. Among the many silkscreens stacked against walls, rolled canvasses in tubes, and pieces by Banksy and Shepard Fairey adorning the walls, there are open wooden boxes, maybe twenty or thirty, full of small wooden printed blocks laying open on tables and shelves.Brooklyn Street Art: When the blocks get that small they are almost like just a texture.Patrick McNeil: Exactly, or just color palette. It's so modular you don't get stuck with anything, you get to explore a lot and if it doesn't work you just put it back the way that it was or pull it apart.Brooklyn Street Art: That's right, you can reverse yourself pretty easilyPatrick McNeil: Yeah you just kind of build a piece and then realize it works better in something bigger -- so they are very loose in a sense. It seems very precision-y and thought out but it's much more looser than it looks. 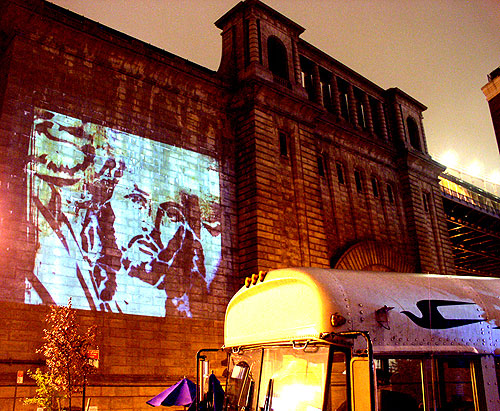 The selective sampling of images that create the Lingua Faile has steadily grown into a library of totems, symbols, pulp art snippets, typefaces and signifiers, set free from their context and recombined with a lucid dexterity, a splash of irony, and an inner voice that says, "go for it." It's an old-school visual sampling that doesn't need autotune for anything, just a hyped sense for combining clips and dropping it on the beat. Talking to them, one sees that it's a loose intuitive sense that is guiding the process. 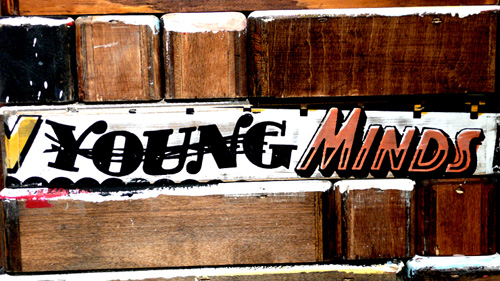 Detail of Faile materials in the studio (photo © Jaime Rojo)

Read the complete studio visit with Faile here on BrooklynStreetArt.com