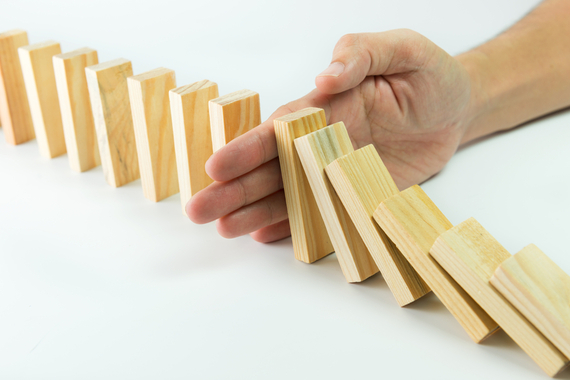 Twice in the past month, I have come across articles about Fortune 100 companies losing a massive amount of money, time and effort because a new "innovation" did not turn out as planned. To avoid adding insult to injury I'll avoid spilling on which companies these are; suffice to say they are virtually universally known in business circles. The striking thing about both these articles was that they centered on the value that the company got from having failed at their attempt to create a new source of shareholder value. Sure, some of that can be chalked up to the usual saving of face that any senior executive will need to engage in when interviewed about a well-intentioned move gone awry. But these went one step further towards being celebratory in tone, enthusing about the level of customer insight that they were able to tap into on account of having launched new product or business models that ended up being damp squibs.

Reading these brought to mind the often cringe-worthy conversations I have with people who are new on their journey of building an innovation capability within established companies. Usually, they have read all the 'right books' and gone to all the 'right conferences' and have returned spooled up and ready to repeat the mantras of innovation in corporate America today. "No idea is a bad idea." "Don't let the antibodies kill your project." "We have to act like a start-up." And yes, "we need to reward failure."

The problem is: you're actually not a startup. You're not a startup, so as my colleague Brian Quinn has written, stop trying to act like one. Sadly, the reality is there are bad ideas. And sometimes the 'antibodies' are actually acting rationally and in the best interest of the company's shareholders. For most medium to large companies, failure - the absence of success - hurts when there is real economic or reputational exposure: stock prices take a hit and boards tighten the screws on management to improve short-term performance.

Startups and entrepreneurs often play by a set of rules that do not apply to the vast majority of scaled, mainly publicly traded companies which drive the economy today. While any given entrepreneur may have various different equity classes breathing down his or her neck to create the world's next unicorn, most investors in startups recognize that the hit rate is really, really low. They expect most startups not to make it because only with a high rate of failure do returns from the rare successes pay for the entire system. This expectation can incent a behavior in early-stage companies to work outlandish hours in order to fail fast; to churn out prototype after prototype and use market-testing as a predictor of success; to overweight reliance on creativity from a lone genius to solve for a singular business model.

The few startups that make it, not surprisingly, eventually stop acting like one. They start acting like they need to drive predictable profit and growth. They start thinking about diversifying their business model to continually evolve without destroying proven value in their core business. And, at an individual basis, they (thankfully, for most) stop working themselves to the bone. Simply, it's a different life with different rules.

A big issue for those who propagate the myths about failure being good within scaled companies is simple: no one's really taking them seriously. If they are even listened to, they're often met with a light smile and a tolerance, which evaporates when the innovation evangelist moves on to his next victim. And most of the time, this just turns into a vicious cycle: with the evangelists sounding evermore unhinged (unsure why no one can understand that they are fighting to advance the company) and the 'antibodies' hunkering down (wondering when they can stop tolerating the waste of time and effort involved in innovation.)

How to avoid failure. Of course, none of these evangelists would claim that the objective of innovation is to fail. They would claim that you could only make non-incremental innovation moves if you work in an atmosphere where risk-taking is encouraged and where you don't have to worry about losing your job if your hypotheses are proven wrong. But you can try to control for that without welcoming failure; it amounts to aiming for and measuring the smallest possible increment of progress which in turn is all about minimizing exposure.

If we frame the job of innovation development as a series of progressive loops which go from learn --> build --> test --> refine and then back to learn again, then logically it should be impossible to fail outright. The two high-profile failures that I led this post with suffered from one of two issues which we see at Doblin all the time when working with big corporates trying to transform their business model. One put all their eggs in the basket of a high-profile product innovation; copying success from an adjacent category space and assuming that consumer demand would be similar (it wasn't). The other let conventional wisdom about the majority of its customer base dominate decision-making, ignoring the possible backlash of its minority 'power user' base. Both could likely have benefited from earlier and more frequent rounds of market and user insight - first generative, to build out the most robust possible platform and then evaluative, to assess and tweak the concept as it took shape.

In the early stages of an innovation's development, the purpose - and the corollary metrics of success - should largely be subjective and qualitative in nature: Are we deepening our understanding of unmet customer needs? Does our hypothesized value proposition constitute something more than a simple product or technology advancement? Are we challenging the orthodoxies (i.e. conventional wisdom) of our company and industry about how we compete and create value?

If the development team is sensible in its activities, it's often very hard to "fail" to meet these incremental goals. Only after the team has reached the stage of a minimally viable product should it flip to purpose and measures that are more objective and quantitative in nature: Are early adoption rates sufficient to justify continue spend on the platform? Do we appear to be able to command a price that will support the specified business model? Are we attracting potential partners under the right terms to create the platform we imagine?

And if the answer to any of these is 'no,' then there should be latitude (under the highly iterative model described above) to continue to test and refine until the answer is 'yes.'

Recent adventures in (attempted) space travel have demonstrated that it is nearly impossible to prevent catastrophic failure even under the most carefully monitored development environments. But that doesn't mean those failures are - or should be - celebrated. The same goes for any innovation launch: if you are a scaled company with shareholders to answer to, try approaching it like failure is not an option by reducing the process to minimally essential steps of learning and adjusting. With the eradication of the nonsense about failure being a good thing replaced by a sensible discussion of how to create economic value, even the stingiest antibodies are likely to sit up and pay attention.

After all, it's hard to argue against the fact that it's way more fun to be a winner than a failure.