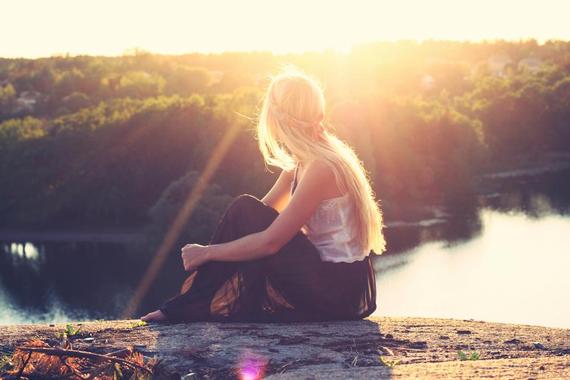 I've heard it time and time again. People holding themselves back because they fear that they might fail. That they may fall down. That they won't be able to recover if they're not perfect.

Hold it right there sister.

Failing is a natural part of life. And it's really nothing to fear!

Think about a baby learning to walk. Do we turn to that baby and say "you failed!!" when it falls down and is unable to do things perfectly the first time? Of course not! How ridiculous would that be?

And yet, we hold ourselves up to a much different standard. A standard that says that if we fall we're a failure and should quit.

Failing doesn't make you a failure. It makes you human!

Without the failure we're just playing it safe. We're sitting in our comfy armchairs always knowing that we'll succeed at what we never really try anything new. We're never extending ourselves into the unknown reaches of what we're capable of.

The only way to grow, the only way to become a bigger and bolder version of yourself is to branch out into the things you're unsure that you'll succeed at. Things that you may fail at spectacularly. Comfort and perfection are the enemies of innovation and expansion.


I can hear you asking - "Why on earth are you thankful for that?"


Well, it's because the hardships, the difficulties, the things that I've perceived as failures have all been things that have led me to live the life I life today. They've led me to my resilience. To my inner rebel, the one that roars. The one that doesn't quit and knows what she's made of.

When things haven't gone exactly how I wanted them I used to become frustrated, angry, and impatient. I'd wonder when things would fall into place. I'd get angry at God and think that he didn't have my back. I'd lose trust in myself and in my capacity to make my dreams come true. I would throw up my hands and quit and think that whatever it was wasn't for me.

But failing isn't a good reason to quit. It just signals that there's a lesson to learn and that perhaps you need to readjust.


I fundamentally believe that we are exactly where we need to be to find those "just right" opportunities.

Everything is a lesson. Experience is the ultimate teacher. And it's impossible to do everything perfect the first time.

When we're not getting exactly what we want when we want it we're being redirected toward something so much better. But you have to reach out and grab it when the opportunity arises.


You have to embrace the moments in your life where you have a choice. A choice of whether to wither under the weight of failing or learn through the rough and tumble of life and come out shinier on the other end.

Think about it this way - a precious stone just looks like a lump of rock until it's tumbled, violently, in order to polish off the rough edges.

It's time to polish off the rough edges of your life by embracing the opportunity to fail and to stop expecting perfection from yourself.

Stop attacking yourself when you make mistakes. Stop judging yourself for failing. Stop expecting to do everything right the first time.


It's time to learn from your failures. Not shut down. Not to throw in the towel. Not to give up. But to double down and double your efforts at whatever it is you desire most.

You know Michael Jordan didn't quit. Neither did Oprah, Edison, Lincoln, or Bill Gates. Or any of the other numerous famous failures there are who went on to become outrageously successful.


They learned the lessons from their experience and they moved forward with renewed commitment.

You can trust yourself to get through any failures you might experience or mistakes you might make. There is a plan for your life. Your life has meaning. A true purpose. A reason for being.

>> I want you to Imagine that you mess up big time. Something devastating. Something that shakes you to your core.


>> Now imagine that instead of defaulting to the old "script" in your head telling you that you're "stupid" "a failure" or "won't ever be good enough" because of this failure - you are instead gentle and nurturing to yourself.


>> You find that you can accept the mistake with grace and learn how to improve from the experience. You even find a little humor in it all and are able to laugh at yourself and your circumstances.


>> You naturally start to stand up for yourself in the face of heart break and devastation because you know you're WORTH it because you're no longer decimating your heart with all of those negative old scripts and messages you've been replaying for so long.


>> You see the purpose and meaning behind the mistakes and you take heart in the fact that there is always a new opportunity to do something different tomorrow - to make a new choice - to become a NEW person. And that God is always providing you with new opportunities to live the life you were truly meant for!


The time is NOW to make the choices that will set you free to live the life you've always longed for.

To break free from the prison of your mind.

To set the boundaries that will help you recognize your worth.

Stop being paralyzed by failure, or the fear of failure. Don't just quit because the road isn't perfectly smooth. Recognize that it's all part of the process. It's all unfolding perfectly to bring you to where you need to be.