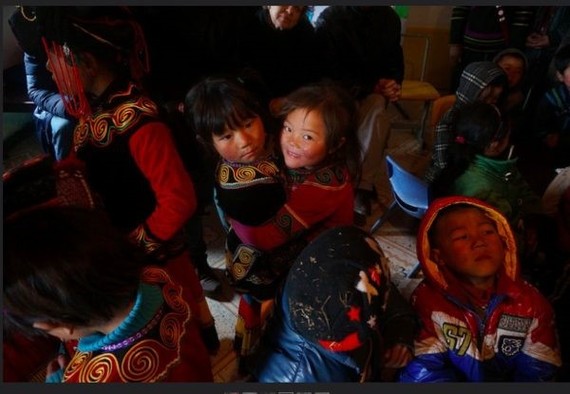 In developing nations, a trend to send children to private schools to avoid public ones is widening economic and social gaps, including in China. YANG JINGJIE/UNICEF
While governments bask in data showing that the development goal of universal access to primary education has largely been achieved, attention is turning to what that really means in the classroom. Educators and human-rights advocates question whether acceptable standards are being met in many schools, as evidence mounts of the proliferation of private education in developing nations, where poor parents often go into debt for their children's sake to avoid local public schools, and where the public-private divide that emerges ends up widening social and economic gaps.

The phenomenal rush to private schooling -- religious, commercial (for profit) or community-based -- was the subject of two working papers on education policy from Unesco in 2015. One tells the story in its subtitle: "Investment in Private Education: Undermining or Contributing to the Full Development of the Human Right to Education?"

The second paper concentrates on national policies that lead to deregulation and the establishment of an education marketplace when governments should be giving priority to reinforcing public schooling.

In a separate but related report in 2015, Unicef found that inequities had generally never been adequately addressed in the Millennium Development Goals. Its report, "Progress for Children," asked: "Why does this matter? Because inequity today is the foundation of inequality. Persistent gaps in opportunity -- between rich and poor households, urban and rural communities, boys and girls, majority and minority groups -- perpetuate vicious intergenerational cycles of deprivation and disadvantage and deepen rifts in society that harm us all."

The United Nations special rapporteur on the right to education has produced several reports warning that the development of alternate schools when public schools fail is contrary to the understanding of education as a public good.

In June, Human Rights Watch plans to take up the issue in a groundbreaking report, which will say that governments around the world are failing millions of children who are not in school.

Meanwhile, the Sustainable Development Goals have upped the ante, calling for not only universal primary education but also guaranteed schooling through the secondary level. Meeting these goals fully would take more than money. Public school systems would need to tackle violence, discrimination, the marginalizing of girls and other underlying issues, as revealed in a Human Rights Watch survey in 40 countries, to be released on June 10.

Rukmini Banerji is an internationally known pioneer in devising better ways to measure educational attainment other than using bare enrollment statistics and other data collected in a vacuum largely free of actual children. In late April, in a program sponsored by the Center for the Advanced Study of India at the University of Pennsylvania, Banerji spoke about her work in India as chief executive of the independent Pratham Education Foundation. India, which adopted a right-to-education law in 2010 under a more secular government than the Hindu nationalist party now in power, claims a 96 percent school enrollment level.

Banerji, a graduate of St. Stephens College in India, a Rhodes scholar at Oxford and the holder of a Ph.D. from the University of Chicago, has led the foundation's innovative Annual Status of Education Report for more than a decade. In her talk at Penn, she offered caveats to glowing progress reports, saying that India still faces serious challenges at the elementary-school level. The annual testing surveys conducted by Pratham deviate from the normal collection of numerical statistics and involve consultations with children, their teachers and families.

In some rural Indian school districts, Banerji said, Pratham has found that school attendance ranged between 50 to 70 percent, and that between 25 percent and 30 percent of children in fifth grade could not read. In its latest annual report, Pratham said that only 2 children in 10 at fifth-grade level in rural India could solve a three-digit division problem: the number 405 divided by 5.

The growth of private education in India has been phenomenal. According to Pratham, Banerji said, in some states more than 50 percent of the schools are private institutions. Reading ability has declined in both public and private schools, where there has also been a "drastic decline" in mathematical learning, she said, though private schools have suffered less than public schools in math teaching.

Pratham has been critical of the persistence of rote learning and poor teacher training that soon bores young children, who simply walk away. Its projects encourage teachers to find ways to involve children more actively in the classroom, sometimes mixing groups from different grade levels to break down rigid walls with fixed curricula that can leave children behind other classmates -- or ahead of them, contributing to frustration in pupils and parents alike.
Private schools seem appealing, though many of them are little more than unregulated profit-producers with unqualified staff. There are often huge gaps between private schools that the poor can hope to afford and the well-established, well-equipped institutions serving middle-class and wealthy families.