As summer vacation ends, teachers observe the annual ritual of returning to school days ahead of their students, to be indoctrinated in the school district's goals for the new year. The latest education fad is tossed out and replaced with newer education initiatives, which are usually older education initiatives spiffed up and redressed under new acronyms. After all, no matter how far we stray, we always return to the fact that improving reading, writing and arithmetic can cure most educational deficiencies.

A handful of years ago, while participating in one such "welcome back" ritual, I was introduced to our newly-adopted district-wide motto, "Failure is Not an Option." A fitting corollary to No Child Left Behind, "Failure is Not an Option" was to inspire us to succeed with each and every student, so that no student would fail, literally. Of course, no one ever required or asked us to give all students a "passing" grade, but as teachers, we were expected to give each student unlimited opportunities to pass. And regardless of the district's gentle shove, most teachers will do almost anything to get a student to show up, pay attention, do the work, struggle with the material, and learn, and pass. 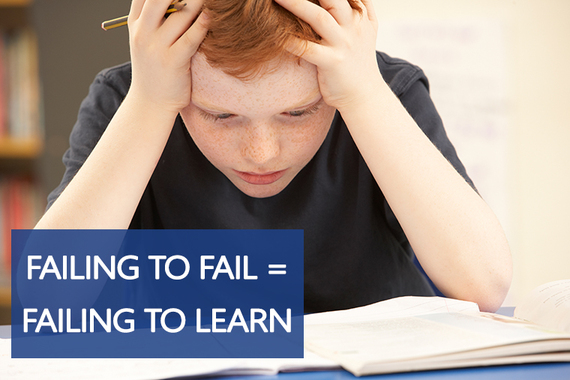 But something funny happens when failure is taken off the table. Success falls right off the table with it, along with true and lasting learning. Watch any child learn to walk, and you see that child fail again and again. She first learns to pull herself up to her feet, using a table or the side of a chair or sofa. She lets go, and she falls. She tries again. She may cry. Yet she tries again. With a little practice, she gets good at standing while holding onto something. Soon, she attempts to move her feet, still holding on. She takes two steps forward, and falls backward. She pulls herself up again. She learns from the last fall what not to do this time. Soon, she is walking unassisted, though she still falls. She is laughing more than crying now. Because she's got this. And falling isn't so bad. And failure is her best teacher.

Fast forward a few years. My son won't learn how to ride a bike for fear of falling. And my students won't attempt to solve a chemistry problem without my constant reassurances that they're doing it "right." Yes, learning is risky, but these are measured risks. I'm right there alongside them. They may fail, but the fall isn't so bad. And the learning that comes with it is priceless.

My son is afraid of getting hurt. And my students, of getting a "B." So they won't try unless all possibilities of failing are taken off the table. And yet, without the willingness to be "wrong," and to learn from their mistakes, their treasured "A" remains elusive, and my son never learns to ride a bike.

We are all familiar with Edison's purported retort to the reporter asking him how it felt to fail 1000 times, "I didn't fail 1000 times. The light bulb was an invention of 1000 steps."

Any scientist can tell you that learning is slow and arduous. And, in scientific research, there are no "right" answers at the back of the book, because the book hasn't even been written yet. As my teacher and Nobel Prize recipient Roald Hoffman told me, "It is always piecewise knowledge, hard-won, and you don't see the totality until a couple of years later. There are often not single 'Aha' or 'Eureka!' moments, there are little pieces of understanding that slowly fall into place."

It took 100 years since Einstein predicted their existence and twenty-two years after construction began on the Laser Interferometer Gravitational-Wave Observatory (LIGO) to find the compressed squiggle, the telltale sign of gravitational waves, on a computer screen. Sometimes it takes more than a lifetime of failed attempts to find what you're looking for.

Learning anything new requires risk, frustration and the occasional "B." And yes, failure, and plenty of it. Because, when it comes to learning, failure is not only an option, but a prerequisite.