By Gordon Brown
Former Prime Minister of the United Kingdom; UN Special Envoy for Global Education and Chair of the Education Commission

Across the globe - from Tahrir Square in Cairo to Dupont Circle in Washington DC - more and more young people are coming to recognise a widening gap between what they aspire to achieve and what reality will deliver. Aware they are illiterate, not because of their failings but because of ours, the young are joining together in a movement demanding their right to an education. These civil rights campaigns, often led by young people themselves, emphasize the need to remove children from exploitation - from the strains of child labour to the stresses of child marriage. And having promised free universal primary and secondary education for all, it is time for us to respond. 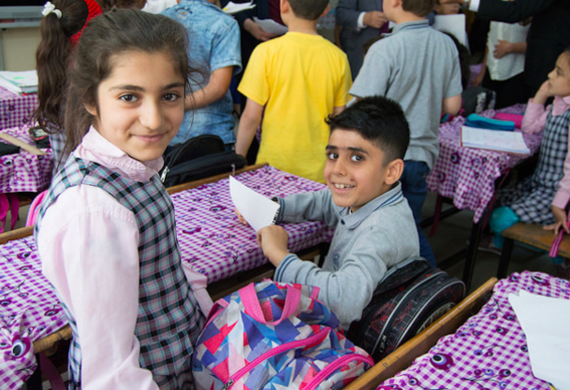 The last half century of education promises betrayed means we cannot sit idly by hoping national governments, from those in Africa to Asia, finally achieve our aims. For while governments are the principal duty-holders, the responsibility to act - to find a way - and secure education rights extends to the international community. Indeed the responsibility rests with us all as international obligations can best be secured by a global groundswell.


That is why the International Commission on Financing Global Education Opportunity (the Education Commission), is set to agree on innovative new obligations - a new responsibility to provide - that will balance the rights and duties of both national governments and the international community. This Commission has been championed by Norwegian Prime Minister Erna Solberg drawing strength from her leadership as co-convenor alongside the Presidents of Malawi, Indonesia, Chile and the Director-General of UNESCO, Irina Bokova. And now, this Commission has embarked on a year's work to construct a new and innovative financing case to ensure every single child is in school by 2030.


The statistics confronting the Commission are a reminder of both the scale of the challenge and what is at stake. There are 124 million children out-of-school globally. Among them, 60 million primary school-age children are deprived of an education due to conflicts and emergencies - 30 million of whom are caught in the crossfire. The Syrian Civil War alone has disrupted the education of some 6 million adolescents, half a million of whom are deprived of a higher education. None of this is to speak of the millions of children in school who receive an education inadequate for this century's challenges.

Promises have been made before. In 1990, we made a promise guaranteeing every child a place in primary school. In 2000, we pledged that by 2015 every of-age child will have completed primary education. And last year, we went further saying, by 2030, of-age children will see the promise of universal secondary education fulfilled. Based on current trends, this last guarantee is likely to be met a full century behind schedule in 2130.

Our failure to deliver an education for refugees and displaced children is not accidental but, in part, the result of a flawed aid system.

Our failure to deliver an education for refugees and displaced children is not accidental but, in part, the result of a flawed aid system. Trapped between humanitarian budgets that inevitably focus on food and shelter, and development aid earmarked for times of peace and not crisis, out-of-school children fall off the agenda. In turn, less than 2 per cent of global humanitarian aid goes to education. To stay the course would be unacceptable.

So what we need is nothing short of an education revolution. As a starting point, the Education Commission - through the generous support of the Norwegian Government - has summoned two dozen global leaders, among them five former heads of government and three Nobel Prize recipients, who are unequivocal in stating education is a basic human right. We are developing a new approach to finance that will ensure every child - irrespective of location, race or wealth - is guaranteed a free education, and that if that child works hard enough the runway to their future is limitless. We know that when a teacher and a child come together in a classroom, we get more than knowledge creation - we see hope come alive. For it is our belief that education should equalise opportunities and incentivise courageous, novel thinking.

An education secures chances and opportunities while humanising us all. Aside from our basic humanity, schooling should be our common denominator.

It has been said that we are not optimists but we live with hope. I say we can be both. We can secure and provide basic minimums necessary to live such as water, food, shelter - often the international community succeeds in these areas. And we can also exercise rights that push us forward. Food keeps you alive but schooling advances the human cause. An education secures chances and opportunities while humanising us all. Aside from our basic humanity, schooling should be our common denominator.

We should all be able to live with a little less fear of what the future holds, a little more certainty that potential can be unleashed. This will be the ladder we come to climb. Recognising the education imperative, any meaningful ladder of opportunity must codify primary and secondary education as universal rights. If and when governments fail to act, this declaration will be held high. But make no mistake, these victories will be hard won.

Ladders of opportunity have taken us to the summits of mountains, the tops of skyscrapers, and into the very beginnings of the cosmos. And when this ladder is born in the classroom, the rungs lead us into an atmosphere of opportunity and monumental achievements. These ladders remove humanity from the sludge of ignorance instead placing us on firm ground from which we can make our ascent. But before we climb to these unimaginable heights, we all must take that first step into the classroom.