As you watch the Labor Day parade this year (assuming your city hasn't cancelled it due to lack of funds), you may be reminded of our national crisis of unemployment.

Some people see the unemployed merely as laborers who failed in the labor market. If you (and millions of others) fail, that's just what the market needs to stay healthy for that other class of people, investors. Forgotten is the idea that we all belong to a larger group called citizens.

We all know the promise--America's promise of unlimited social mobility. Nothing is stopping you from scaling the ladder, so get climbing! The American Dream is within anyone's grasp!

Yet in the last 30 years, the American Dream has grown increasingly out of reach for more and more people--unless they live in a country other than America. According to our nonpartisan friends at Measure of America, "A poor child born in Germany, France, Canada, or one of the Nordic countries has a better chance to join the middle class in adulthood than an American child born into similar circumstances." Take THAT, you cheese-eating socialists!

In contrast, the American economic ladder has broken down--these days, you have to be born above a certain rung if you want to climb at all. And that rung is getting higher by the year. 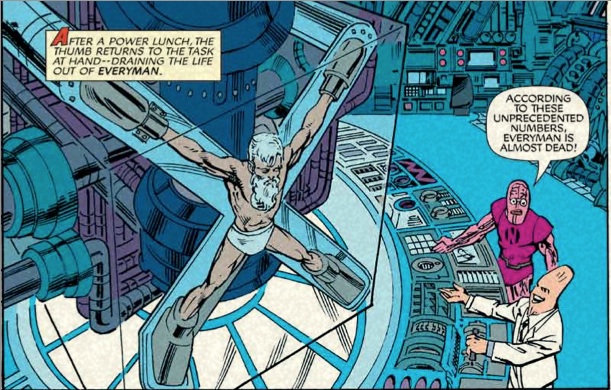 So what? We should let people disappear from the marketplace like a bad product or business idea, right? We're not citizens, merely economic winners and losers--and we reward only the winners. That's what makes America great.

Except it isn't what makes us great.

We all contribute to the success of this country, even when we fail--and our failure often makes the winners that much better because they had to compete against us. College and professional sports leagues realize this--there, the winner does not take all, but rather is rewarded while also enriching the entire league. The point is to have a strong league in which great individual achievements are possible.

Not so with the Just Us League of America. Their sinister plan? Any and all rewards go straight to the top (especially to CEOs who cut jobs and got richly rewarded). Those at the top are held up as role models--ignoring the fact that the educational, economic, and social structures that would make a respectable level of achievement possible for more people are defunded, destroyed, or out of stock. Sorry.

Ask yourself this: Can The American Dream be achieved by an individual in isolation? Do we want people to succeed at everyone else's expense? Or is Everyman's loss--sooner or later--every man's loss? We must face that fact that even in America, the success we strive for and celebrate is never purely "self-made." We aim to foster success in America--for all.

Labor Day is a celebration of American laborers. That's worth celebrating. But let's remember that we are not merely laborers. We are American citizens. And we are all in this together.