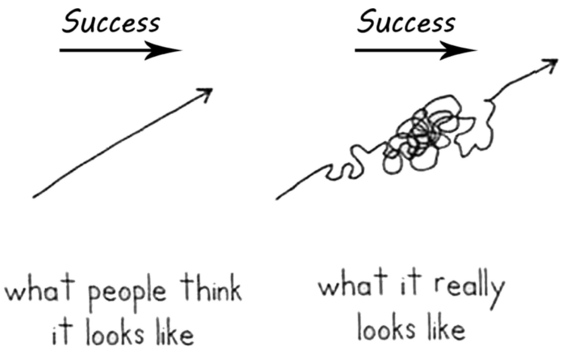 Failure. Just reading the word makes us uncomfortable. Try whispering the word under your breath. Do you physically feel the discomfort? Most of us do. There's something about that word that we despise, yet failure is an important part of our growth. In fact, it's essential to our survival. We are programmed for failure from the day we are born. If you don't believe that just watch a child learning to walk. They fail time and time again, falling, crashing, crying, and grasping for support along the way. Yet eventually, they figure it out. They learn to walk, then to run. Most of us stop there, but others go on to do other amazing things, from skateboarding to skiing and extreme sports. The lesson learned is failing repeatedly at something is how we learn best. We can study concepts and principles which shape our thoughts and beliefs, but we don't learn from them like we learn from our experiences. And some of the most rewarding experiences are the ones we fail at.

THE BRAIN NEEDS FAILURE TO SURVIVE AND THRIVE
Our brains are hardwired for learning, which means they're also hardwired for failure because failing at something is how we learn. Failure is how our brain's neurons are created. That's why our brains are constantly looking to identify opportunities where failure occurs. These situations not only present our minds with an opportunity to learn and adapt to improve and become better. They also create the neural connections in our brains that make thinking, problem solving, decision making, and communicating more fluid and easier for us. But despite these known facts, why do we continue to loathe failure and avoid it like the plague? Why do we try and protect ourselves (and others) from failure? What, instead, if we told ourselves to fail like your life depends on it?

FAILURE IS AN ENTREPRENEUR'S ONLY OPTION
Most people think entrepreneurs live by a mantra that says, "Failure is not an option". But I disagree. Perhaps the true mantra should read, "Failure is the only option." As an entrepreneur, I encounter failure on a daily basis. I have to. There really isn't any other option. If I didn't agree with that statement I would have stopped dead in my tracks years ago. To be an entrepreneur is to not only know how to fail gracefully but to embrace it in a healthy way. It's important to fail because you took risks, not because you didn't.

FAILURE DEFINES WINNERS AND LOSERS
There is one simple truth that defines the difference between those who succeed and those who don't - it's how they view failure. To me, failing simply means you found a way that doesn't work. And we try again and again until we find what does. Those who lack the audacity to reject mediocrity in this creative process will undoubtedly fail (ironic isn't it?), while those who embrace failure as a universal step towards success find that success isn't so hard after all.

What many people don't understand (and it makes all the difference) is how they speak to themselves when a failure occurs. If we are focused on a growth mindset we view failure as an opportunity to improve. Failure is a valuable feedback loop that successful people thrive on. It's one more step in the right direction. However, failure is poisonous when individuals are fixed in their way of thinking and start associating their failure with the idea that they are stupid or ignorant, which will immediately destroy their creative output.

"When failure is not an option we can forget about learning, creativity, and innovation." - Brené Brown

FAILURE TRUMPS TALENT
So what does it really mean to be an entrepreneur? It isn't necessarily about how smart you are or how much talent you have or how creative you are, although these traits definitely stack the cards in your favor. I believe that entrepreneurism can be best defined as an individual's ability to solve problems by learning from the failures they encounter on a daily basis. Those who cannot stomach the pain of failure will most likely not survive that long in business.

Starting a successful business undoubtedly entails a series of successes and failures. I've started numerous companies over the years, my first one at the age of 16. Today those businesses collectively generate over $50M a year in revenue. But what people don't see when they look at my successes are all the mistakes and failures I've had along the way. And I promise you, there have been some very big ones. Failure has been a painful but integral part of my success.

"If you don't make mistakes, you're not working on hard enough problems. And that's a big mistake." - Frank Wilczek, 2004 Nobel Prize winner in physics

There is no straight line to success - just ask any entrepreneur and I'm sure they will agree. So I challenge you once more- take a deep breath and whisper the word failure, but this time be conscious of the empowering paradox that failure is an essential part of success. Remember, your greatest insight is often right next to your greatest blunder.

Serial entrepreneur with ventures in automotive, beauty, franchising, and tech.