This year marks the centennial of the Panama-Pacific International Exposition (or PPIE), the 1915 world's fair that celebrated the opening of the Panama Canal and trumpeted San Francisco's recovery from the ruinous earthquake and fire of 1906.

The exposition, a grand event that drew nearly 19 million people from all over the world, covered 76 city blocks and featured national and international pavilions showcasing all manner of innovation, industry, and the arts.

It was a fair of firsts, biggests, and bests. Alexander Graham Bell placed the first ever transcontinental telephone call to the PPIE; the fairground boasted the world's largest wood and steel building; and attendees included notables such as former president Theodore Roosevelt, illusionist Harry Houdini, and inventor Thomas Edison. The ukulele craze of the 1920s can even be traced to the PPIE, where the novel instrument from the Hawaiian Territories was introduced to the mainland.

One-hundred years later, the San Francisco Bay Area is celebrating the PPIE with an on-going series of events including exhibitions, screenings, concerts, lectures, panel discussions, performances, and demonstrations. A website about the centennial celebration can be found at www.ppie100.org. Its events section lists what's going on. 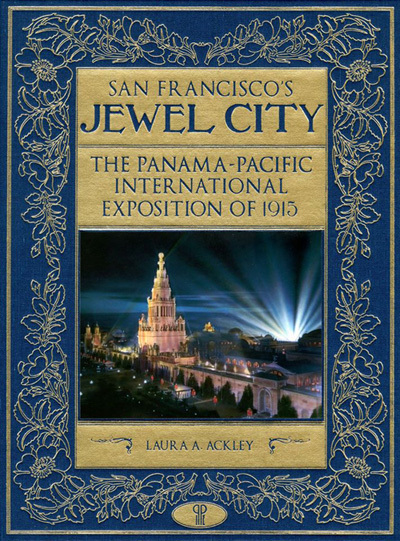 Another way to learn more about the PPIE is to check out three recent books about the fair. The best among them may well be Laura A. Ackley's San Francisco's Jewel City: The Panama-Pacific International Exposition of 1915 (Heyday). One hundred years later, it is the next best thing to having visited the historic event.

San Francisco's Jewel City takes readers on a richly detailed tour of the PPIE, revealing the drama behind the building of the fair (a massive undertaking not unlike the building of a city), as well as the many displays of industry and culture that awaited visitors within the exposition. The sections on the fair's inspiration and construction, ticketing, attractions, and merchandise -- as well as on Liberty Bell day, Audrey Munson "The Exposition Girl," and its air shows and automobile races all make for fascinating reading. In so many ways, this lavishly illustrated volume is as much a triumph as the fair itself. No San Franciscan should be without it. 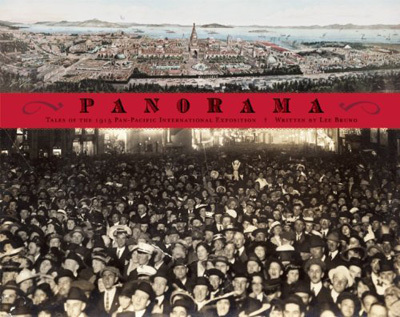 Another recommended book is Lee Bruno's Panorama: Tales from San Francisco's 1915 Pan-Pacific International Exposition (Cameron + Company). This attractive, heavily illustrated coffee table book is all about pictures (some in color), and its many sweeping vistas, perspective shots and crowd scenes are beautifully reproduced and have a "wow" factor. Panorama focuses in part on the fair's famous participants -- including its visionaries and builders, as well as its artists, performers, and visitors. There are spreads on wild west legend Buffalo Bill Cody, industrialist Henry Ford, educator Maria Montessori, composer John Phillips Souza, and comedian Charlie Chaplin, among others. The book as well contains a history of the fair through the eyes of the author's great-grandfather, Reuben Hale, who played a major role in its creation.

Also be sure and check out Abigail M. Markwyn's Empress San Francisco: The Pacific Rim, the Great West, and California at the Panama-Pacific International Exposition (University of Nebraska Press). The PPIE grew out of the social and political climate of the Progressive Era. By focusing on the influence exerted by women, ethnic minorities, labor unions, and others (these groups gave speeches and staged pageants and parades at the PPIE), Markwyn offers an analysis of the social construction of pre-World War I America. Though scholarly, it's not as dry as it sounds. The chapter on "Sex and Other Vices at the Fair" is fascinating, and even a bit surprising. 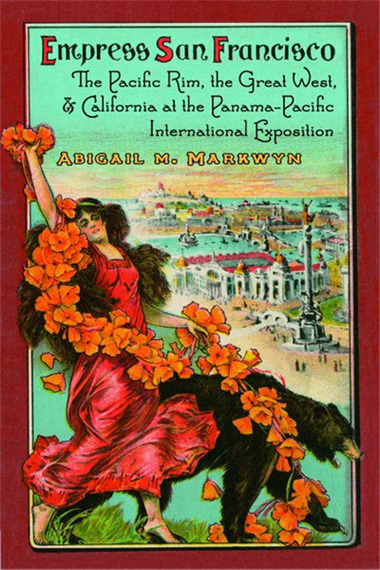 Another somewhat recent university press title is Sarah J. Moore's Empire on Display: San Francisco's Panama-Pacific International Exposition of 1915 (University of Oklahoma Press). Published in 2013, this scholarly work examines the Panama-Pacific International Exposition through the "lenses of art history and cultural studies, focusing on the event's expansionist and masculinist symbolism."

The PPIE was a visual extravaganza (complete with a jeweled tower and night-time light shows), and anyone interested would do well to own more than one picture book on the event. An earlier title in the ubiquitous, sepia colored "Images of America" series is William Lipsky's San Francisco's Panama-Pacific International Exposition (Arcadia Publishing), from 2005. It is a worthwhile, affordable look at the fair. Though now out-of-print, also worth tracking down is Donna Ewald and Peter Clute's San Francisco Invites the World: The Panama-Pacific International Exposition of 1915 (Chronicle Books), published in 1991.

Numerous books -- including lavish pictorials, guide books, and specialty works on various topics -- were issued at the time of the PPIE. And just about all of them, 100 years later, are somewhat hard to come by. In fact, many are collector's items.

Open Library, an initiative of the Internet Archive, is an online collection of books where viewers can browse by subject, author or topical list. Notably, Open Library contains more than 1,000,000 ebooks, including many issued at the time of the PPIE. A good number of these titles can be read online, or downloaded for free.

For gorgeous imagery, be sure and click on the "read online" link for The Blue Book: A comprehensive official souvenir view book of the Panama-Pacific International Exposition at San Francisco, 1915 by R. A. Reid, or The art of the exposition: personal impressions of the architecture, sculpture, mural decorations, color scheme & other aesthetic aspects of the Panama-Pacific International Exposition by Eugen Neuhaus. The former was issued by the Official Publisher of View Books, the latter by San Francisco's own distinguished printer & publisher, Paul Elder and Company.

There are other interesting and amusing titles available through Open Library, such as The Pan-Pacific Cook Book by L. L. McLaren, Condensed facts concerning the Panama-Pacific International Exposition, and The Boy Scouts at the Panama-Pacific Exposition, by Howard Payson. A classic work of the time is The Jewel City: Its Planning and Achievement; Its Architecture, Sculpture, Symbolism, and Music; Its Gardens, Palaces, and Exhibits by Ben Macomber. Open Library is a great resource worth exploring. Expect to spend hours in the stacks.

Thomas Gladysz is a San Francisco arts and entertainment writer and local history enthusiast. He is also the founding director of the Louise Brooks Society, an online archive and international fan club devoted to the legendary silent film star. Gladysz has organized exhibits, contributed to books, appeared on television, and introduced the actress's films around the world.