Aug. 1 was a special day in Phnom Penh (the capital of Cambodia), the start of Choul Vassa. Buddhist monks dedicate themselves for three months (during the rainy season) to their Buddhist practice, retreating to the pagodas. By tradition people visit the pagodas (also called wats) on this day with offerings for the monks, seeking their blessings. This year the festival came the day before high school exams and hordes of young people crowded the Somrong An Deth Pagoda outside Phnom Penh, as laughing monks poured pitchers of water on their bowed heads to bring them good luck. Music played, children ran about the sprawling pagoda grounds with its fanciful statues of gods riding chickens and serpents, and white clad head shaved nuns added their blessings.

Some 95 percent of Cambodia's people are Buddhist. "Nation, Religion, King" is Cambodia's national motto and it is one of the few world nations where Buddhism is the state religion. The religious world here, however, is not just about Buddhism. Freedom of religion is guaranteed and there's an extraordinary range of different faith traditions, mostly working on education and to help the poor and vulnerable, but also bringing their beliefs to Cambodia. Cambodia has ancient Muslim communities also, and a host of small but distinctive traditional indigenous religions. And Cambodia's Buddhism is recovering still from its near destruction during the Khmer Rouge period (1975-9) when most monks were killed or disrobed and many pagodas were destroyed.

But the religious marketplace is a story for another day. What piques my interest on this trip is how religion is lived in daily life.

And indeed, Buddhism and religion more generally are visible everywhere. Orange robed monks walk the streets each morning with a bowl, as the tradition is that they must beg their food (or the equivalent in cash) from citizens. They attend universities and ride motorcycles and tuk tuks (the three wheeled taxis), carrying iPads and cell phones. Gorgeously adorned pagodas peek out from the trees and buildings almost anywhere you turn. Stupas, where the ashes of the dead are stored, are everywhere.

But beyond the visible signs of the Buddhist faith, there's another phenomenon that has intrigued me from the day I first noticed them: the spirit houses that are a standard part of virtually any house or shop, every gas station, music store, restaurant, school or mechanics store. These small houses or shrines offer a way to comfort or appease the spirits, a place where offerings are made.

It's a bit more complicated than that, however. There are first the spirit houses that are outside the house. They are to ward off the evil spirits who seek to enter. The spirit must ask permission to come into a house and the offerings assure that at least they enter in a good mood. A practical and sensible insurance policy, surely. Inside the house is a second kind of spirit house, again a place where offerings are made, that honor the gods or spirits in the home. The visiting spirit must ask permission to stay by asking the one inside the house, usually the house keeper or family ancestors who have are part of the household.

The outside spirit houses tend to look like pagodas, with the remarkable Cambodian decorations of nagas and curliques. Being practical people, most Cambodians today have concrete spirit houses that bear up to the rains and humidity but there are also intricate wooden houses if you know where to look for them. And there are also simple makeshift spirit houses slapped together with a few boards. Many are gorgeously painted. The inside spirit houses are more square and generally made of wood, though today plastic is used more and more.

Where does this tradition come from? It is hardly a formal Buddhist practice, though it is so integrated into this very Buddhist society that it is accepted as part of the culture and beliefs. It seems that the spirit houses are part of far more ancient traditions, animist colored by the Hindu beliefs and gods that were part of Cambodian culture and life for a thousand years. The inside spirit houses owe far more to Chinese spiritual traditions, both in design and the way they are described.

The gods or spirits who come to these houses are as diverse as can be. Some are general, unnamed, feared and loved. Some are specific, speaking to people, even seen by them. One example is the spirit house at the Extraordinary Chambers in the Courts of Cambodia, where accused Khmer Rouge are on trial. The spirit house there is where Cambodian citizens take their oaths and it honors a specific guardian spirit, Lokta Dambang Dek, the Lord of the Iron Staff.

Spirit houses are a vivid illustration of faith in daily life. Many Cambodians pray there every day, make a small offering once a week, and a bigger offering once a month on tgni sol (holy day). They exemplify the complex ways that culture and religion, history and present are intertwined. And they are only a tiny piece of the story. Religious beliefs are such an integral part of life for many here that it's hard to see much less to pin down how those beliefs affect behavior, relationships and values.

Below is a slideshow about spirit houses in Cambodia: 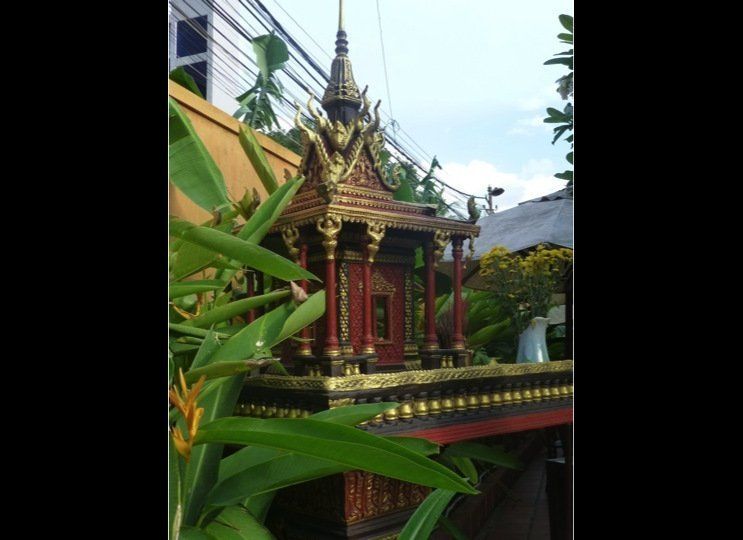 1 / 22
A spirit house outside a restaurant in central Phnom Penh, capital of Cambodia.
Katherine Marshall