I found Noah's Ark in Indiana, and I wasn't even looking for it. It was Bakelite jewelry that my daughter, Anna, and I were perusing in an antique store in Huntingburg, the small town next to my hometown. But lo and behold, I looked up and there, perched atop a cabinet, was a wooden Noah's ark! It was thrilling for a number of reasons, not just because I found it without having to set out on an exhausting expedition up Mt. Ararat. My friend, Liz Neumark, collects Noah's arks and how cool would it be to bring one back to New York City from Indiana? 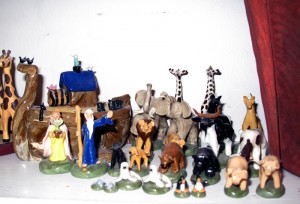 This particular ark had been constructed in the 1800s and still contained traces of the original red paint. Like most of the arks that were made back then to quietly amuse children on Sundays, the Christian day of rest, it was homemade, but the animals that came with it were not - obviously, the original animals, which would have been carved in wood, had been swept away on the waters of time. When I got home, I delivered the ark to Liz's apartment building in New York City, where she moored it with her pagoda ark (sent to her by a cousin in Hong Kong), and the various other arks she's collected over the past 19 years.

"How did it start?" I asked Liz. She explained that when her daughter, Nell, was born, she was named in synagogue the following Sabbath. On that Sabbath, the Noah story was being read in synagogue. Three months later, Liz was in Texas and saw an ark in a gift shop. Then, a few days later, another ark, and "Okay, ark, Nell, Noah, I get it," Liz said. "And my need to acquire was activated." Suddenly, arks were everywhere she looked, and today she possesses a variety of arks - only three-dimensional ones, no placemats or other ark-themed products - including a farm ark with farm animals, an endangered species ark, and her favorite, from Maine, a glass ark with hand-blown glass pieces. "It gets dusty and I'm very strict about not letting the cleaning lady dust them lest she mix up the animals. That would be very traumatic, to end up on the wrong ark!" 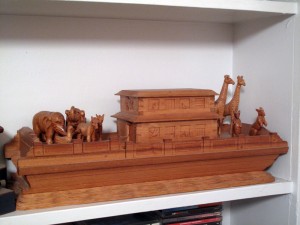 The wrong ark, or the right ark, has been in the news lately, with Noah's Ark Ministries, a group of Chinese Christians claiming to have found Noah's ark on Mount Ararat in Turkey. Apparently, there is a wooden object which they say carbon dates to almost 5,000 years atop the mountain. However, there are already many within the scholarly world accusing them of having planted the wood up there and staging a hoax.

The search for Noah's ark, and presumed ark discoveries, are not new. The book of Genesis states that the ark, which was built according to God's specifications to save Noah and his family and animals from the flood, came to rest on Urartu, which is assumed to be today's Mt. Ararat in Turkey. Around the year 425, Philostorgius wrote of Mt. Ararat, "...they say that considerable remnants of its wood and nails are still preserved there." Within this last century, photos have been released of the "Ararat anomaly," an odd, vessel-like formation encased in ice near the summit of Mt. Ararat and which, ark enthusiasts believe, might be the remains of the ark. The anomaly has been captured in film and high-resolution digital images from satellites, but thus far, Turkey's government has not green-lighted the site's exploration, and it's anybody's guess what lies beneath the snow and ice.

For centuries, the Biblical stories were accepted by adherents to the Judeo-Christian traditions as containing literal, historical truths. This assumption began to change in the 17th and 18th centuries, when rationalism and the Enlightenment insisted that intellectual rigor and critical faculty be applied to religion in order to arrive at what was empirically "true" about the Biblical text. Subsequently, scientific scrutiny cast a long shadow of doubt on the Bible's veracity. Today, there are perhaps more doubting Thomases than not. The scholarly world often seems at odds with, and sometimes antagonistic toward, believers, as if the two communities are mutually exclusive, and as if anyone who believes in the possibility of a flood and a God who personally served as the architect and on-site contractor for the ark's construction is unsophisticated and simple, and cannot also recognize science as valid and important.

To be sure, there are many like Noah's Ark Ministries who would believe that archaeology can corroborate events mentioned in the Bible, and they make that agenda perfectly clear. Less clear is the agenda of some in the scholarly world who can be close-minded in a different way, for many are unwilling to entertain the possibility that there are objective, historical truths in the Biblical stories. Those truths have many times been re-enforced by archaeological finds, like the "House of David" inscription dating from 850 BC found in the ancient Israelite city of Dan which provides the first extra-Biblical evidence of a Davidic dynasty and perhaps of David himself.

One wonders what effect the discovery of an ark might have on rationalists who have thrown the Bible out with the floodwater. Would they say, "Okay, ark, no steering mechanism, God as Navigator, I get it."? Would the presence of a tangible ark encourage their buried faith to float to the surface? Personally, for me, faith is not tethered to a distant mountaintop; it is, in fact, moored comfortably with the rational, intellectual world, much as an old, painted ark from Indiana can rest side by side in New York City with a pagoda from Hong Kong.