After reading the news of 60 masked men, armed with iron rods, who barged into an all-girls high school in Rawalpindi, Pakistan to enforce their vision of female modesty, I asked myself this question: what right do these "keepers-of-faith" have to rigorously impose Islamic morals on other people? I asked myself the same question when I read the news that Saudi morality police--acting as "God's agents" on earth to prevent sin--beat up a woman and a man accompanying her on suspicion of dating. They turned out to be related.

When the vice-prevention team of Haia realized their folly, they tried to hush up the Yanbu woman, who was accompanying her uncle for work in Medina, by paying for their hotel stay, SR500 in cash, and mint leaves (splendid cartoon in the local paper), with hopes that she would not lodge an official complaint, which she did.

The image of God's men welding iron rods, exerting force on women and being afraid of an earthly complaint is all a bit odd when thinking of the Prophetic character. Do they really think they're furthering God's wishes on earth? If so, why does their lack of tact so contradict the manner of the last prophet who, through kindness, won the hearts of the rigid Meccans?

To answer my initial question, it is important to ponder upon what constitutes faith. Being a practicing Muslim man, who has experienced Muslim life in the United States, London, Jordan, Egypt, Saudi Arabia, Morocco and Pakistan, I'm often driven to despair by the emphasis on outward appearance as opposed to one's manners, morals and ethics.

"Why do you not keep a beard?," I am often asked, whether I am at the Regents Park Mosque, in London, or the mosque on 96th Street and Lexington Avenue, in New York City. Some have more forcefully tried to convince me that it's feminine to have a clean shave. "If you keep a beard, my heart will automatically draw toward you because you'll be fulfilling a sunnah," said a man, who hardly knew me, at the Columbia University prayer room that I frequented during my undergrad and graduate-school days. But it surprised me that the gentleman never bothered to actually get to know me; if he did, he would have found a man eager to lead an ethical and moral life and someone who was working toward bettering himself spiritually.

Over the years, I have taken heat from many Muslims for using prayer beads because it's a "despicable innovation in Islam," for getting a western-style haircut because "the prophet either kept long hair or shaved his head" (mind you, there were no scissors then), for wearing black because "it's a color for women and men are supposed to wear white," and for my interest in Sufism because "all those Sufis had gone astray" from the right path.

This is only a fraction of the list of things that others commanded that I address in order to be granted a place in heaven, in addition to finding myself an honorable wife who would keep me away from the "lure of women."

If the true measure of faith for men is a four-finger beard and for women is to wear hijab, covering every lock of their hair, then what about the prophet's teaching: "The most excellent jihad is that for the conquest of self."

Surely, Islam talks about modesty, but what is it? "Modesty is ultimately an awareness of both our sensual energy (our marvelous capacity for mischief)--and whence, also an awareness of our capacity for restraint (our awareness of limitations)," Abdallah Adhami, a prominent Muslim scholar explained. "Modesty in this sense is, therefore, inextricably linked to humility."

So, what is humility? "Like modesty, humility begins in the heart, and inwardly, it is the most radiant manifestation of inner calm; outwardly, again like modestly, humility exudes dignity, poise and restraint," the scholar noted.

Ah! So it starts from within.

I can dress modestly, but what good is it if I don't restrain my glance when a well-rounded woman passes by. What if I am only pretending not to look? I often hear that an unintentional glimpse of the opposite sex is forgiven, but I've seen glimpses that last for 60 seconds, jokes apart.

Forbidding the wrong and commanding the good with use of force will never generate the effect that inward stirrings of the faith would. One can force the other to read a religious text but it is unlikely that the person will drink deeply from the fountain of divine wisdom. The requisite factor for modesty, humility and piety is the intention and the will to change and progress.

Counseling is effective when the other is seeking counsel. With force you can create a social deviant, but not steer somebody toward religion. In response to a question on the mannerism of good counsel, Faraz Rabbani, a leading scholar of Islam, wrote: "Our age is an age where the Prophetic mercy, gentleness, gradualness, and wisdom need to predominate and condition any "promotion" of both virtue and law."

The only plausible reason for the morality police--may they be government funded or otherwise--to intimidate devotees to follow their commands is that it takes less effort to tell other people to do something than it takes to do something yourself. There is a psychological benefit in the knowledge that they are fulfilling God's wishes by preventing sin. And there is also an element of pride in being God's agent.

It is easier to counsel others to keep a beard and to dress modestly than to counsel others on how to be a better human being. All you have to do is to pontificate for a few minutes, scare the other person with talk of hellfire or threaten them with an iron rod or just beat them up--after all, you're only ensuring that they're making headway to heaven (pun intended)--and you can feel the instant gratification from demonstrable change. 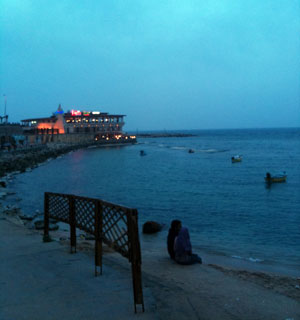 The affinity for addressing minor but highly-visible problems at the expense of addressing more pressing and fundamental issues can be illustrated by the example of the public service announcements, in the form of stickers, posted on one of the mini-buses in which I sat in Alexandria, Egypt. The stickers, meant to shame the young couples who are fixtures on the seaside promenade during the warm summer months, depicted a canoodling couple surrounded by hellfire and contained the slogans "would you be happy if this were your sister?" and "where is your shame?" Both pictures sent the same message, which I respect, but this is not the solution for the Egyptian youth who I know would love to romance under wedlock but can't afford marriage.

The normative dowry is set so high that an Egyptian man earning what's considered a decent income, LE3000 per month, cannot afford marriage. By some accounts, one needs as much as LE100,000 for housing, furniture, jewelry and payment for the marriage celebrations.

Egypt is a country rife with corruption and poverty is omnipresent. Sit in a beaten down Lada and the taxi driver will narrate the tale of his suffering, his favorite Cleopetra cigarettes smoking like a chimney. By the time you reach your destination, you wonder, as I did, if this skeleton-like driver whose hands shiver like the loose, crackling doors of his 1970s Lada is actually more pitiful than his taxi. But the only solution that the religious groups chant at the top of their voice is that the women should cover their hair and not follow the infidels. Problem solved.

Conversely, for real change, one would have to take the pains to mold the other person in a way that would enable them to start thinking for themselves which, in affect, brings an inward change.

If you ask me, until you're squared away on the bigger issues--manners, morals and ethics--don't go out picking on the minor shortcomings of other people. We're all works in progress. Live by example and inspire others to improve themselves. As Prophet Jesus, may peace be upon him, said: "You hypocrite, first take the plank out of your own eye, and then you will see clearly to remove the speck from your brother's eye."

Photograph of a couple at the Alexandria Corniche by Fahad Faruqui.