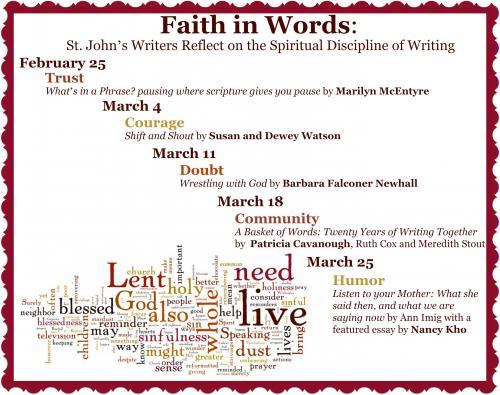 At the first planning session for a special lecture series at my church called "Faith in Words: Writers Reflect on the Spiritual Discipline of Writing," there was some generalized discussion between the five writers in the congregation about aspects of the writing process in which faith has come into play. One author gravitated toward talking about trust, another toward courage, a third wanted to focus on doubt, and a fourth wanted to focus on community. I focused on being resentful that they had chosen the four topics on which it would have been a snap for me to talk about how writing and faith come together for me.

And then they asked if I'd talk about humor.

Which made sense, because this is a church where a.) our priest is an accomplished stilt walker and does NOT miss a chance to strap his stilts on to illustrate a parable; b.) when seminarians must leave our church to go to their first posts, the big good-bye present is a flaming Bible (to be used ironically, of course); and c.) when a reading is particularly Old Testamenty-fire-and-brimstoney, readers have been known to say, "Hear what the Spirit is saying to God's people" followed by a backward glance at the priest and a "Good luck with THAT" whispered into the mic.

I have always believed that God has a sense of humor. How else do you explain a Bible passage I like to think of as "Revenge of the Follically Challenged:"

Then he went up from there to Bethel; and as he was going up by the way, young lads came out from the city and mocked him and said to him, "Go up, you baldhead; go up, you baldhead!" When he looked behind him and saw them, he cursed them in the name of the Lord. Then two female bears came out of the woods and tore up forty-two lads of their number. (Kings 2:23)

God had to have been going for the laugh there. Without some comic relief, the Bible is a hard slog, at least it is for me. And that's the first place where, for me, humor and faith come together - because both make it easier to bear witness to hard truths. That's why satire is such a potent form: when there is an injustice or indignity, it's tempting to climb on a soapbox and rail against it. I happen to think it's more effective to wrap your message in a couple of sly jokes, a bit of playtime with the absurd, to engage people who might otherwise not listen. I have an entire section on my blog comprising Open Letters meant to point out where I see people straying way off base from the old "love thy neighbor as thyself" thing, without hitting anyone over the head.

These open letters are inspired by McSweeney.net's "Open Letters to Entities Unlikely To Respond" feature to which I always submit, fingers crossed hard that they'll publish my letters. Ironically, the entity most unlikely to respond thus far has been the McSweeney's editorial team. But I remain hopeful.

And that's another place where comedy and faith align, because humor is a sign of hope, and hope is a fundamental requirement for faith. If you've lost hope, it's hard to believe things will ever get better and consequently harder to see why you should bother trying to make them so. As Erma Bombeck once said, "When humor goes, there goes civilization." There have been times when it's been hard to find the laugh; I remember writing at my computer on the day of the Newtown massacre and finally having to shut the computer off completely and leave the office. That day, both faith and comedy were in short supply. But without humor, how do you move forward and make the positive changes we are called by faith and our humanity to make?

I believe in a God who wants us to be joyful, and comedy (both writing and reading it) is a never ending source of joy for me. I'm lucky because the house in which I was raised was full of laughter: of the five people in my childhood home - myself, my parents and older brother and sister - I promise you, I am the fifth funniest. It raised my game and bred into me a hunger for a daily belly laugh. I feel so lucky to know the humor writers I've met through blogging, who are guaranteed to make me shoot coffee out my nose whenever I open an email with a new post they've written. Besides, laughing is healthy. Scientists say its physical benefits include improved blood flow, an increase in the number of infection-fighting antibodies, and better management of blood sugar levels. I think about music all the time, but the best sound to my ears will always be laughter, and if it caused by something I wrote, so much the better.

Finally, writing -- any kind of writing -- and faith share another commonality: every morning you get a blank page to start over again and do better than you did yesterday. You can write the worst piece of drivel anyone in the history of mankind ever wrote today, and start penning a best seller tomorrow morning. Conveniently, that's the same time you can try to be more patient or more generous or less judgmental than you were today. I believe in forgiveness for what I've done and haven't done, and for what I've written and haven't written. That every mistake I make is for a reason, even if that reason is to learn to stop making stupid mistakes or to learn to use the word "nonplussed" properly. That God wants me to get up every day with the intent to be a better person and a better writer, which really boils down to one thing: keep trying.

My proof? In the Bible there is a passage where Paul literally bores a man to death with his words.

And there was a young man named Eutychus sitting on the window sill, sinking into a deep sleep; and as Paul kept on talking, he was overcome by sleep and fell down from the third floor and was picked up dead. (Acts 20:9-10)

And yet Paul eventually went on to sainthood and, maybe more importantly, became a contributor to the best selling book of all time.