More than 100 faith leaders and immigration activists participated in a demonstration and were arrested at the White House on Thursday to protest the daily deportations of undocumented immigrations.

The demonstration opened with a prayer service and press conference at 12pm in Lafayette Park followed by a protest along the White House fence to call attention to what a Church World Service (CWS) statement referred to as President Obama's "inhumane immigration enforcement policies." After refusing to leave White House sidewalk, the activists were arrested and charged with blocking passage, according to CWS's statement.

Citing frequently referenced estimates, CWS's statement said that the U.S. deports 1,100 undocumented immigrants every day when the government should focus on expanding resources for immigrant families -- and especially for the tens of thousands of unaccompanied children apprehended at the border every year.

Rabbi Kimelman-Block, who was arrested for civil disobedience at an October rally for immigration reform, led the prayer and invoked the Jewish community's immigrant past to enforce his message:

We were once demonized. We were called "undesirable.” Laws were passed to keep us and people like us out. Immigration is a fight that our ancestors fought. It is a fight our grandparents and our parents fought. And it is our fight today.

"We have come to Washington, DC to tell to President Obama and Congress that kicking out suffering immigrant families and unaccompanied children is not the answer. Immediately stopping the deportations and extending due process to children escaping the violence of drug cartels, gangs and poverty is the just way to respond," Bishop Carcaño said.

Rev. McCullough reflected on his decision to risk arrest in a blog on The Huffington Post, writing:

We have grown tired of our decision makers putting immigrant families and children in the middle of their political games. Some Democrats are ready for the President to take this action prior to the November election hoping that this will help mobilize immigrant voters to the polls. There are also Republicans that cannot wait to bring about another lawsuit stunt against the President for this additional executive action, even though it is fully within his executive authority. Both of these calculations by political operatives lack moral vision, are short-sighted and deny the dignity and humanity of the more than two million immigrants who have been deported by this President. Our nation is better than this, and I pray that our President is as well...

Ultimately, we in the faith community will not remain silent while millions of immigrants continue to live lives marked with fear and unrealized potential. This is why I am risking arrest today. As a pastor, a husband, a father, a CEO, and a man of faith, I must take part in holding our politicians accountable for the impact they have on the lives of my community members.

Today I bring my prayer for this country and my plea for this President to act into physical form, in front of the White House, a symbol of the power of this country and the promise of democracy. The restrictions of handcuffs pale in comparison to the desperation felt by so many of our immigrant brothers and sisters, as they seek lives free of fear and an opportunity to pursue the American dream. I cannot sit idly by. Mr. President, act boldly and act now. We expect nothing less.

The action kicked off a weekend of anti-deportation events in Washington D.C., including an August 2 White House rally.

CWS live-tweeted the demonstration with photos and calls to action:

In front of the @WhiteHouse. Stop the deportations. #not1more #pray4relief pic.twitter.com/MZoSwVSBBV

RT @bend_thearc: The rally has moved in front of the WH. Soon 130 clergy&activists will be arrested #not1more pic.twitter.com/7cHYQ3VoJH

"In each generation, we must decide what kind of country we will be." - Rabbi Jason Kimelman-Block #pray4relief #not1more

"REAL religion is about what our beliefs compel us to do." Rev. @KathleenmcTigue #not1more #pray4relief 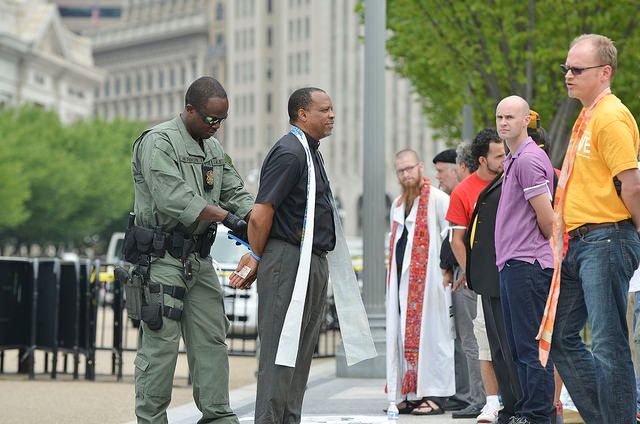