Faith has been one of the most challenging topics in my life. I was raised in a devoutly religious family. As an intellectual teenager, I began to question the beliefs I'd been raised with and found that I couldn't reconcile them with my scientific worldview. So when I moved out to go to college, I also moved away from my family's church and became an atheist.

This lasted for a year or two, until a friend of mine pointed out that it takes just as much faith to believe there isn't a God as to believe that there is.

Boy, did that ever mess with my head.

Thankfully, there was a way out. I became a devout agnostic. I declared the whole question out of bounds. I decided to worship at the altar of achievement instead.

Oh, and did I mention the two burnouts that followed? 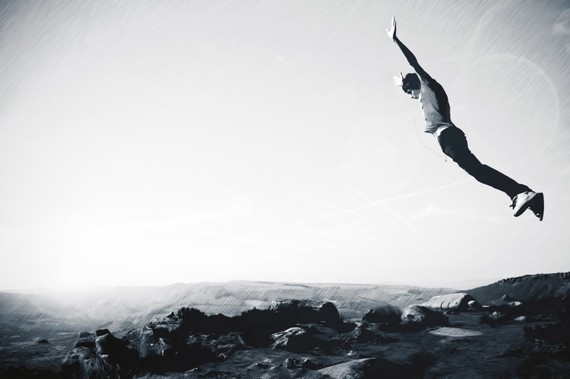 It would be another ten years before I found a definition of faith that worked for me, because I thought that faith was primarily about group-based beliefs. To me, it was about religion, about righteousness, about belonging.

The problem was that everyone seemed to disagree. How could one group be right and everyone else be wrong? How could truth create so many wars and conflicts?

What I didn't realize is that there are two types of faith - belief-based faith and action-based faith - and that they work in very different ways.

Belief-based faith can provide comfort, clarity, courage, and connection. However, it can also create conflict. Have you noticed that the more important your beliefs are to you, the more defensive you tend to get when they're attacked or questioned? You may even be bothered when others don't share them.

When you're in fear, you need to be right about your beliefs. And the more important your beliefs, the stronger your fears become when those beliefs are questioned.

At the end of the day, all beliefs require a certain amount of faith. And belief-based faith is extremely important. It's just not the subject of this book.

And, just as important, it's about being caught.

In the domain of action, faith is the practice of leaping and being caught.

Yes Yes Hell No decisions are Leaps of Faith, which are profoundly self-honoring acts. They're among the most intelligent choices you can make.

The practice of leaping and being caught is the surest tool for making Big Decisions and creating Big Wins. It provides concrete, consistent, and compelling benefits, right here, right now.

After a long and crazy path, I am living in the last place I expected, married to the last woman I expected, doing the last thing I expected - and living a life that's better than I ever could have expected.

It's taken me quite a while, but after enough Leaps of Faith, I've learned to trust that my spirit is much better at this game than my mind is, and that both are much wiser than my fears.

This article was created as an excerpt from Yes Yes Hell No! The Little Book for Making Big Decisions. To eliminate your insecurities, transform your fears, and develop total trust in your ability to make big decisions, please purchase the book on Amazon or download the first five chapters for free.