Freckles can be adorable -- we can all admit Pippi Longstocking wore hers well. But would you actually grab eyeliner pencil and DIY your own fake freckles?

Olivia Wilde is the latest celeb to admit that adding freckles is a part of her makeup artist Gucci Westman's beauty routine, telling Nylon:

"Something I was just talking about that I think is a cool trick I haven't seen many makeup artists do is -- Gucci Westman does this -- she adds freckles. Because when you put on foundation you lose some of that natural look so the freckles can make it look like you're not wearing anything which is nice. She uses the Revlon Colorstay Brow Pencil because you don't want your freckles to smudge. Not a good look."

Westman, who works with Wilde as the Global Artistic Director for Revlon, isn't the only one. Makeup artist Charlotte Tilbury gave models faux freckles for the Chloe Fall 2011 show, Sam Chapman dotted the models for Holly Fulton's show at London Fashion Week and Petros Petrohilos did it for Paul Smith's runway models for Spring 2014. "Freckles make everyone look younger," he told Women's Wear Daily.

And it's not just for fashion shows. British pop star Jade Williams, aka Sunday Girl, told Grazia, "I have an awful habit of drawing freckles around my nose using a brown eyeliner."

As for doing it yourself, it's cute if it works but can be disastrous if you end up looking too dotty. The gals at Elle UK gave it a shot, but their results was a little spotty (pun intended) for our taste. On the other hand... we would basically trust Olivia Wilde with our lives.

Would you try giving yourself eyeliner freckles for the day? 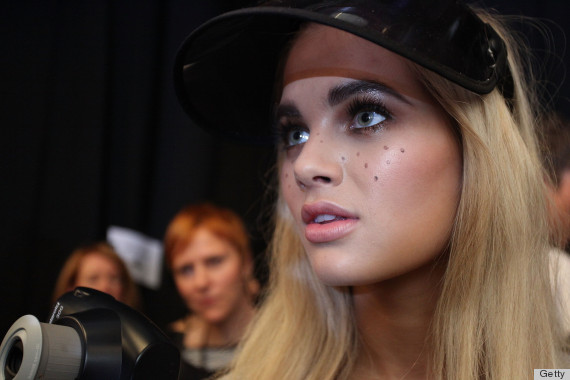