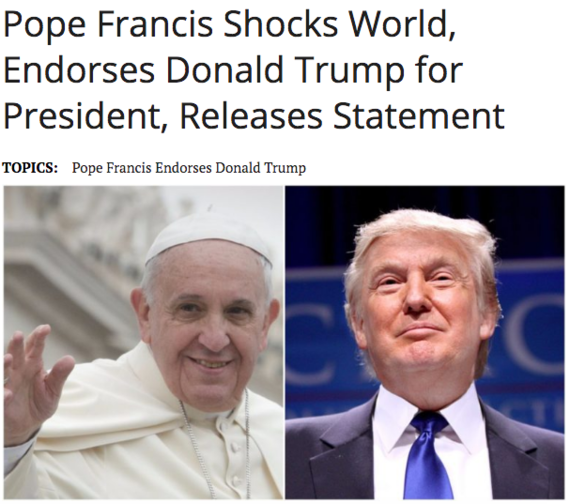 Fake news is a problem.

Everyone thinks so, even President Obama who decried it in Berlin yesterday (that is, if TVNewser is to be believed. Who knows?)

To my mind, Fake News is not really a problem. It is rather a function of a free press - a newly freed press, and that is no bad thing.

In 1961, AJ Liebling famously said "Freedom of the press is guaranteed only to those who own one". And he was right. In 1961, owning a press was a very expensive business, whether it was a TV broacast network or a newsaper. You needed to spend millions, if not hundreds of millions for all the gear necessary to get 'your news' into the homes of milions of people. Whether that money was spent on presses, paper, ink and trucks (not to mention reporters) or studios, cameras, edits and broadcast towers, it was a very closed society.

Because it was closed, it was also controlled. What you got to read or see was really in the hands of a small group of very rich and powerful people. It was, in fact, very far from a free press. It was a corporate press.

Then, along came the Internet which essentialy blew away the barriers to access to the public. Now, with the Internet, it was possible for anyone to put anything into 3 billion homes around the world.. for free. All you needed was a phone or a laptop and you were done.

The result was an explosion of content that was no longer the product of a few powerful media companies. In fact, as it turned out, the major media companies could barely compete with the results of a 'free press'.

In a recent piece in Vox (if they are to be believed), the top 20 fake news stories outperformed real news at the end of the 2016 campaign.

Now the pressure is on. Who is going to put a stop to this? The scapegoat of the moment is Facebook, which has become the platform of choice for 'fake news', with its 1.6 billion users.

So now Mark Zuckerberg is going to decide what is 'real news' and what is 'fake news'? This is a very slipperly slope indeed. Facebook as the Ministry of Truth?

What is needed instead is for the newspapers and magazines and TV networks of the world to restructure themselves to reflect the new reality of a free press, something that they have, in truth, never really been confronted with before. They lived in a world of a very controlled press. Their press. They always paid lip service to a free press, but now that they are faced with it, they are terrified.

How do we deal with a free press?

Fortunately, we have a working model, and one that was developed long before the Internet or Facebook ever rolled around.

In 1452, Gutenberg unleashed his printing press on the world. Prior to Gutenberg, all books were laboriously hand-written and what books there were (mostly bibles) were controlled by the Church and the Monarchy. Think of them as The New York Times and NBC.

If you wanted to write a book, you went to work for the Church. You got a job as a Monk and you wrote what the Church allowed- Leviticus, for example.

Then, along came Gutenberg, and suddenly everyone and their brother could start writing and publishing books. It was a disaster, and quite unbelievable to the Church and Monarchy.

Martin Luther published his 95 Theses on a Gutenberg press. The Pope was a fraud! If that wasn't Fake News, what was? (At least in 1517).

Initially, the Church and the Monarchy tried to repress all these 'fake news' sites,but to no avail. Once the Free Press cat is out of the bag, you can't put it back.

Instead, the world came to grips with the benefits of a free press in a different way.

Publishing houses arose that tapped into the creative explosion that a free press released. Of course, there was a lot of junk, but there was also Cervantes and DeFoe and a whole spectrum of new talents and new ideas (Isaac Newton, for example).

Today, everything that the NY Times publishes or NBC puts on the air is a product of an employee of the NY Times or NBC. That is crazy. That is medieval thinking.

JK Rowling did not work as an employee of Random House. Random House does not limit the books it publishes to people who are on its payroll. Instead, Random House finds the best authors it can find, nurtures them, works with them, and publishes their work.

The media companies should do the same.

If you buy a book published by Random House, you know it is good.

The NY Times and NBC and the rest of them should get in the business of finding the best independent bloggers and news providers worldwide and 'publish' their work. That way you would know what is believable and what is not. You don't need to go back continuall to Snopes to check something out.

It's a different model - publishing instead of producing. But we know it works. It has had 500 years of testing.