The revelation that two passengers aboard Malaysia Airlines flight MH370 were traveling under stolen passports brought with it questions about who the men were and why their stolen passports were not flagged. Authorities have been investigating why two Iranian passengers on the vanished Boeing 777 were able to board the plane using an Austrian passport stolen in 2012 and an Italian passport stolen in 2013 from the Thai holiday island of Phuket. Interpol has stated the men have not been linked to the jet's disappearance, and has said it is unlikely they had terrorist ties.

The Malaysia Airlines case has increased scrutiny on security flaws in international travel. The MH370 passengers bypassed a security check that could have uncovered fraud because European passport-holders with a flight connection to Europe in less than 72 hours are not required to apply for Chinese visas, according to The Independent. And while the stolen documents were registered in Interpol's database, authoritiesfailed to check those records.

Such exploitable flaws may arise more frequently than commonly assumed. Interpol warns that four out of every 10 international passengers are not screened using its voluminous database of missing travel IDs. In one striking case, the investigation into a 2010 Indian plane crash that killed 158 people discovered 10 passengers were traveling on stolen or forged documents, according to The Financial Times.

While terrorism is the primary concern with illegal passports, the newspaper notes most of the demand comes from illegal immigration. Malaysian police chief Tan Sri Khalid said Tuesday that one of the Iranian passengers traveling on a stolen passport, 19-year-old Pouria Nourmohammadi Mehrdad, was planning to seek asylum in Germany.

Stolen documents are just one aspect of the illegal passport trade. There are several other routes to obtaining fake identity papers:

1) Doctor a lost, stolen or other black market passport Whether stolen or misplaced, a stunning amount of documents are separated from their owners. Interpol's database of lost and stolen travel documents contains 40 million records from 167 countries. Interpol's director in Thailand told Reuters that desperate travelers have also been known to sell off documents to cover travel costs; police say such sales fetch just $200.

These documents can then end up in the hands of criminal networks that either try to use them themselves, or replace the information and photo in the ID. In some parts of the world, these are easy and cheap to procure. A reporter for Britain's The Telegraph newspaper found agencies in China offering a two-day service for around $830 (£500 ) for a lost or stolen passport forged with new details.

The holy grail, of course, is a blank passport, stolen in diplomatic transit by seasoned criminals. The New York Times explains:

Of all forms of passport fraud, this is one of the most frightening. Only the very best counterfeits make it past airport security. But authentic blank passports, when filled out correctly, are extremely difficult to detect. Virtually the only way to trip up a person traveling on an authentic passport is if he makes an error filling it out or if the passport number turns up in a database of stolen documents.

2) Forge a passport Officials have been warning for years that trade in counterfeit documents is becoming increasingly sophisticated. The Malaysia Airlines investigation has put Thailand's passport production industry in the spotlight. The country has emerged as the global hub of the false documents black market, partly because of expertise in forgery and good travel links, according to The Telegraph.

3) Buy an official passport with a false identity In some countries, it is possible to bribe the right people for an authentic passport with a false identity. According to South African newspaper The Sunday Independent, British citizen and terror suspect Samantha Lewthwaite — known as the White Widow — paid $1,800 for fake South African documents from corrupt officials in 2005. A separate NBC News investigation in 2007 found Peruvian officials willing to take payments for custom-made documents, boasting of a 25-year career in counterfeit documents.

4) Forge documents and apply for an official passport Another method is to apply for an official passport using fake documents. Birth certificates are relatively easy to fake in the U.S., as they don't require a photo or fingerprints and can be provided by multiple authorities, such as churches and hospitals, David Simcox, board chairman of the Center for Immigration Studies, told PBS FRONTLINE in 2001.

Although procedures have tightened since the Sept. 11, 2001 attacks, U.S. government investigators testing the system in 2009 were able to to obtain passports using the identities of a dead man and five-year-old boy, the Associated Press reported. 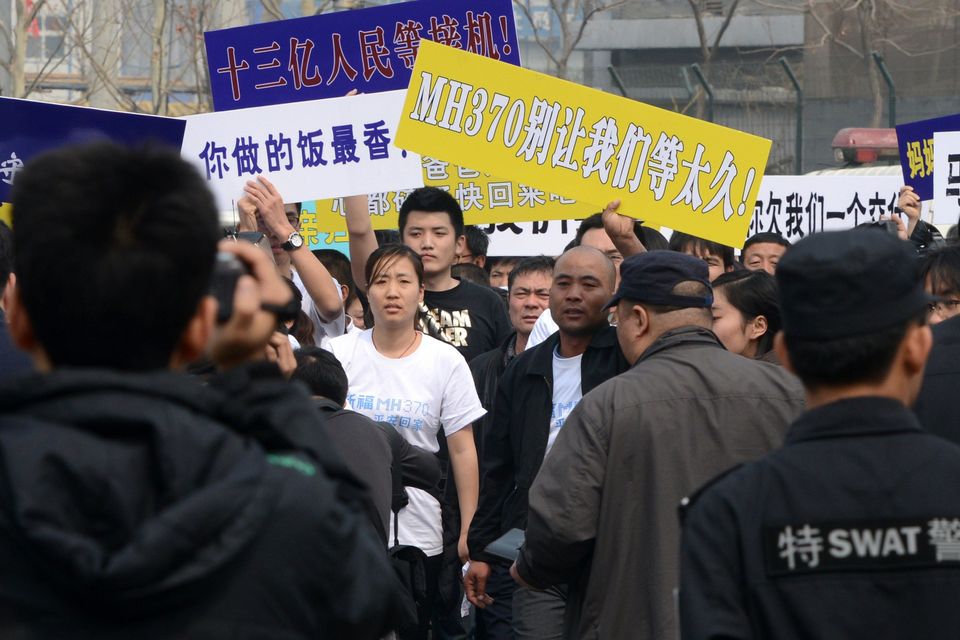 1 / 160
CHINA-MALAYSIA-MALAYSIAAIRLINES-TRANSPORT-ACCIDENT
Grieving relatives (C) of passengers on Malaysia Airlines flight MH370 hold placards as they march towards the Malaysian embassy in Beijing on March 25, 2014. Scores of angry relatives of the Chinese passengers aboard Flight MH370 set out on a protest march to the Malaysian embassy in Beijing on March 25 to demand more answers about the crashed plane's fate. AFP PHOTO/ GOH CHAI HIN (Photo credit should read GOH CHAI HIN/AFP/Getty Images)
Getty Images