City councils are attempting to hide the level of economic decay suffered in some Northern Ireland towns by painting fake storefronts on closed-down businesses in anticipation of the G8 economic summit this month.

Around 300,000 pounds of government funds have been invested on sprucing up more than 100 properties in the Northern Ireland county of Fermanagh, which will host the international G8 economic summit June 17-18, The Irish Times reports. Closed storefronts have been painted to resemble working stores, complete with doors that appear open but don't function and two-dimensional goods hanging from the windows, all in an effort to hide the dereliction caused by the economic struggles of the past few years, according to the Irish Times.

“We want to present the county as best as we can and promote it in terms of industry and tourism,” local Council Chief Executive Brendan Hegarty told The Irish Times, calling the project a “phenomenal opportunity.”

But some locals view the superficial efforts as a wasteful attempt to hide real economic struggles. This particular area in Northern Ireland suffers higher child poverty rates than the rest of the country, ThinkProgress reports. Meanwhile, lost jobs and failed businesses in the fallout from the global financial crisis are recovering at a glacial pace -- economic growth in Northern Ireland is expected to remain under 0.5 percent through 2014, Belfast Telegraph reports.

“No one is fooled,” Phil Flanagan, a former owner of a closed butcher shop which has now been papered over to appear as if it’s still thriving, told The Telegrpah. “It is like when your mother-in-law is coming to visit and you give the house a tidy up.”

Indeed, such attempts to hide harsh economic realities aren’t new. In 2010, the U.K. town of North Tyneside painted nearly an entire street with decoy storefronts to hide the effects of recession, the BBC reports.

But not everyone in County Fermanagh views the fake shops negatively. The project has provided a much needed stimulus in the form of jobs for painters and construction workers, according to the BBC.

"The town looks fantastic, it's a good excuse for people to get doing work,” one painter said. 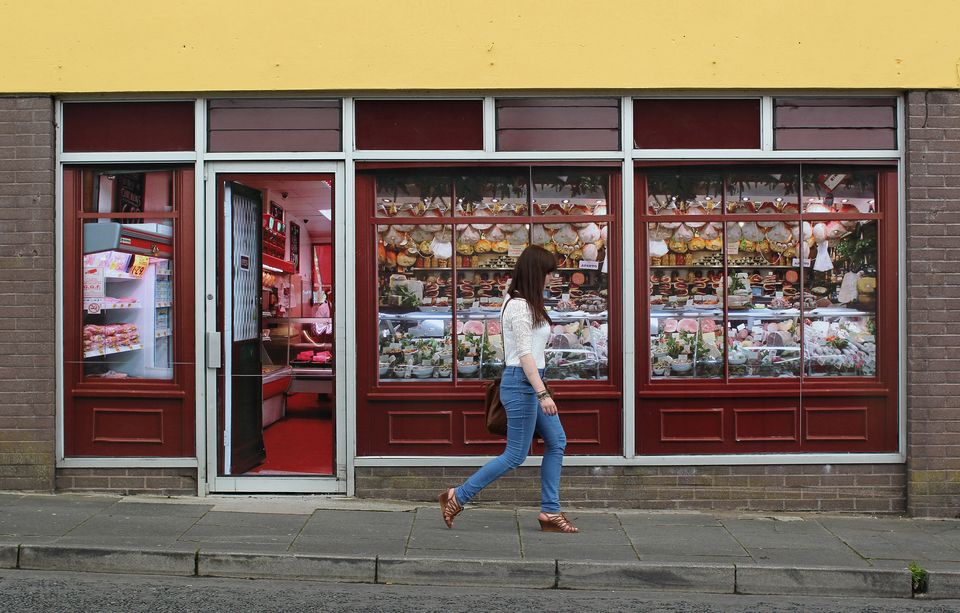 1 / 4
A pedestrian walks pass stickers applied to the windows of a former butcher’s shop in Belcoo, Northern Ireland, outside Enniskillen on June 1, 2013. The stickers give the premises the superficial appearance of a open business. More than 100 properties within range of the Lough Erne resort which hosts the G8 Summit have been tidied up, painted or power-hosed. Britain is hosting this year's summit on June 17-18. AFP PHOTO/ PETER MUHLY (Photo credit should read PETER MUHLY/AFP/Getty Images)
Getty Images