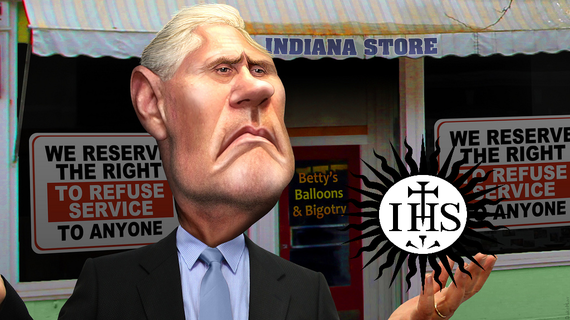 The Vice Presidential debate was irritating for numerous reasons, but the most irritating bits were delivered at the very end when Mike Pence attempted to tug at Christian heart strings when he spoke about his faith. There is something obscene about a person calling themselves a follower of Christ while clinging to the side of Donald Trump and claiming the man will be the savior of our nation.

Listening brought to mind a post written by the hilarious Dan Lyons on The Secret Diary of Steve Jobs blog. He wrote it six years ago in response to a rising tide of opposition to marriage equality from Christian denominations. Lyons told me that he is proudly atheist to the point of obnoxiousness, saying:

"I'm pro LGBT, and totally anti-Christian. I admire the precepts or philosophy of Christianity. But I don't believe in God and I think organized religions are toxic. All of them."

But he was raised Roman Catholic, and knows his stuff.

Here's an excerpt from the piece I thought about while listening to Mr. Pence during the debate. It's titled Hate-spewing "Christians" need to listen up:

...in the last fifty years the nutso born-agains have twisted everything up and what they call their "religion" no longer has anything to do with anything Christ ever said or taught -- it's about using Christ's name to gain secular power. Let me explain. Jesus Christ did not preach hate. He did not tell people to oppress other people. He did not ever say that he hated gay people. He did not tell his apostles to run for political office after he died so they could change the laws of Rome.

I'm not even a Christian, and even I know this stuff. So let me take a moment to explain some of it to you.

There was a story about a Good Samaritan. Have you heard of it? Do you understand it? The message isn't that you should help strangers. That story is about violating taboos. The Samaritans and Jews weren't strangers to each other -- they hated each other. Like, seriously hated. Like, Jews weren't supposed to talk to Samaritans or they'd be unclean and need cleansing or something. But wait, there's more. One of the guys who wouldn't touch the beaten Jew was a priest. The other guy was a Levite -- meaning, a big deal super-duper high-class extra-holy Jew. You know why those two guys walked by the injured Jew and didn't help? Because it was considered unclean to touch a dead body, and they figured that if they tried to help the guy and the guy turned out to be dead, they would be defiled. So they walked by.

Do you get it now? Jesus, your big hero, was saying that if you have some rule or conventional wisdom that causes you to do harm to people, violate the goddamn rule. You probably cannot understand how shocking this story was when Jesus told it. Because this was really, really shocking. First, he's saying that the priests and Levites are jerks; and second, he's saying that Samaritans, the skankiest, nastiest, grossest, most reviled people in that part of the world, were better than priests and Levites.

Taboo breaking happens all over the place in the Jesus myth. (And let's be clear. This is all a myth. But it's actually an instructive myth, if you understand it.) Jesus heals a woman who's suffering from menstrual flow; she touches his robes. This makes him unclean. Does he get pissed off? No, he blesses her and calls her "daughter." He heals the son (or possibly servant) of a centurion. He heals people on the Sabbath.

Or let me digress to the story of the Prodigal Son, which you presumably also do not understand, despite your claim to be Christians. The point of that story is not that it's great to forgive sinners like the younger son who asks for his inheritance, leaves, squanders it, and then returns in shame after tending pigs (a Jew tending pigs -- get it? ) and falling on hard times. No, the point of that story is the older son. He's the dipshit who thinks he's such a great, obedient, law-abiding, straight-arrow goody-goody, and who gets all pissed when Dad celebrates the return of the younger son, and complains about this, because -- pay attention -- he's a hypocrite. He follows the rules, and does everything he's supposed to do. But you know what? He's the bad guy in this story.

So let's move on and return to our discussion of hating the homos. Let him who is without sin cast the first stone? Ring any bells? Or how about this: Judge not, lest ye be judged?

Oh, and here's one that you even put on your own Manhattan Declaration document, which is ironic because you don't seem to understand what it means and in fact what you're doing is the exact opposite of what this statement intended: Give to Caesar what is Caesar's, and to God what is God's. In other words, do not become entwined with the state. Focus on the next world, not on this one. Or, to be more blunt: Stay the hell out of politics, you boneheads. If a state or federal government wants to marry gay people, that's their decision. Leave it alone. Go say some prayers.

Yet somehow you've twisted this around and interpret it to mean that you should impose your will onto others by passing laws that would force other people who do not share your beliefs to be bound by the rules of your Bible, even though (a) your Bible is fiction and (b) you're not even interpreting the fiction correctly.

It's bad enough that you're hateful bigots. But to dress up your hate and bigotry as an expression of Christianity? That, my friends, is pure evil. If you want to go around hating people, fine. Go for it. It's stupid, and pointless, but whatever. Go hate people. Just don't go around saying Jesus told you to do it.

It's stunning to see that a devout atheist knows more about what it means to be Christian than many Christians.

Mr. Trump? Mr. Pence? You are doing it wrong.