As gross as it is, fake vomit seems like one of those things that has always been around. In fact, it churns the stomach to think that someone had to invent it.

But as far as inventions go, fake vomit -- or, if you prefer, "fake barf" -- is about 52 years old, and it's nauseating to comprehend that such a product wasn't around to be enjoyed during historical turning points such as the American Revolution, the Roaring Twenties or World War II.

Yes, strange as it sounds, man was able to fly long before he could fool people with imitation upchuck.

But Stan Timm, who along with his wife, Mardi, is one of the authorities on this arcane topic, says that it simply took that long for science to catch up to the real thing.

"Really, the latex made it possible," Stan Timm told HuffPost Weird News. "I don't think it was available until then."

There are people who could lay claim for getting fake vomit -- like many innovative products -- onto the market and in the hands of consumers, including Marvin Glass, a legendary toy designer.

In the world of gag gifts, Glass and his company were the cream of the crop, devising novelties like wind-up chattering teeth and toys like Mouse Trap, Operation and Lite Brite.

The story goes that the inspiration came from one of Glass' employee who was walking down the street and saw somebody’s vomit, according to Collectors Weekly. Like most reasonable people, he was grossed out at first. But then he realized it had the potential to be a great gag item. Eventually he developed the prototype.

However, Mardi Timm says if anyone deserves the title "Father of Fake Vomit," it's Irving Fishlove, of the Chicago-based novelty company H. Fishlove & Co.

"He was the son of the founder and a genius when it came to fun and silly things," she said. "Although Marvin's employee came up with it, Marvin didn't really like it. However, Irving knew that was a great gag."

The key to any successful product is attention to detail, and the Timms -- who are working on a book about the Fishlove company -- say Irving Fishlove really applied himself when it came to making the best vomit possible.

His son, Howard Fishlove, told the Timms about coming home as a schoolkid to find his kitchen counter covered in various types of fake barf.

"[Howard] told us it was the most disgusting thing he had ever seen," Mardi said.

That first fake vomit was marketed under the brand name "Whoops" and was fairly popular with its target audience: boys between ages 8 and 12.

Documentary filmmaker and toy designer Tim Walsh says there are some very basic reasons why fake vomit was and remains popular.

"It's immediately apparent what you're suppose to do with it," he told HuffPost Weird News. "It's disgusting, and therefore memorable and outrageous. Also, it looks very real, which ups the disgusting factor, yet it's not as disgusting as fake dog poop, so it has that going for it. Finally, it's cheap."

The Timms agree that the cheapness is a real factor for fake vomit's longevity.

"It's a classic novelty," Mardi Timm said. "It's something that every generation picks up."

Although she says people have tried changing the product's color, texture or size, Stan Timm is a purist.

"Today's fake barf doesn't look as good," he lamented. "However, if you sprinkle some water on it, that adds to the realism."

He also turns up his nose at foreign versions.

"Really, I think fake vomit is something that America does best," he said.

But while the story of toy puke is one worth regurgitating for future generations, some people like Kirk Demarais, who has authored two books about novelty products, wonder if there will be any future chapters to write.

"This is a tough time for the prank and novelty industry," Demarais told HuffPost Weird News. "Many of the big names have branched out into being costume and party suppliers. Maybe their run was in the last century because there aren't a lot of new products.

Is it possible that there simply aren't any bodily fluids left to imitate or emulate?

"Well, most of the bodily fluids have been covered," he admitted. "But a while back, a company came out with a bar of soap featuring short, curly hairs. I thought that was clever." 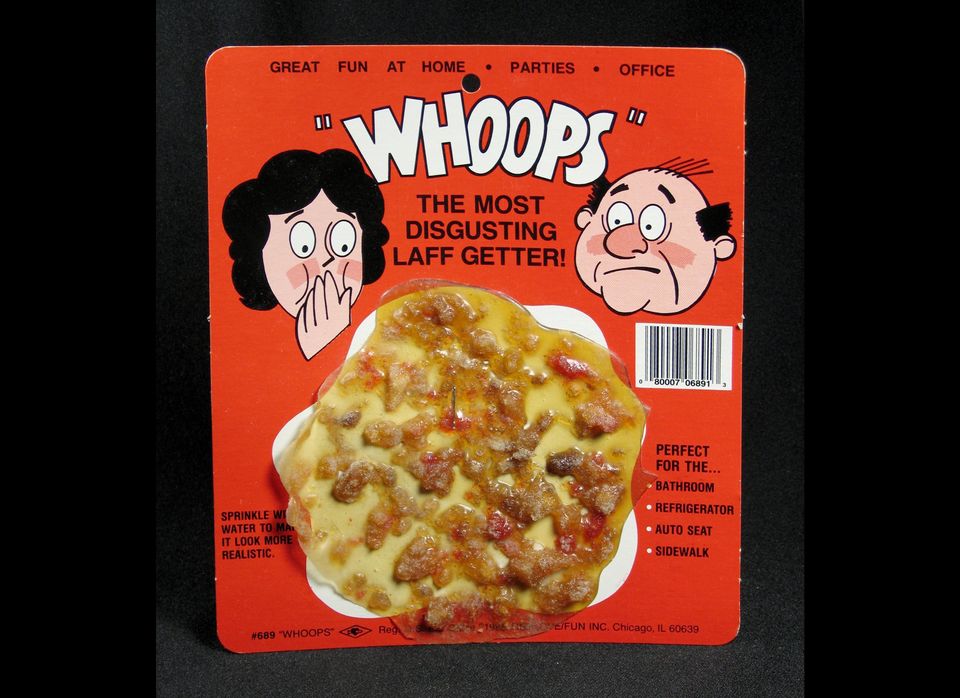 1 / 4
Fake Vomit: A Look Back
"Whoops" was the first fake vomit to hit the market in 1959. Since then, fake vomit sales have been fairly steady as the product is discovered by each new generation.
Kirk Demarais