By Erin Zammett Ruddy for Parenting

Before I could even click the share button, the voice in my head was like, dude, don't post that picture. That would be Fakebooking. Making the snowman was pretty awful. Alex is in timeout right now. You were kind of crazy. You're sweating profusely. And the kids are now eating him. The photo is a lie and you don't lie.

You probably heard that we got some more snow in the Northeast over the weekend. Even though it's pretty much gone, it was a legit dumping (over 6 inches in our yard). On Saturday, it was 50 degrees and gorgeous so we invited my nephew, Gregory, over to play in the snow, which meant I played in the snow, too. For a long time (I tried to stay inside for a bit but it backfired.) We threw snowballs and went on pretend hikes around the yard and set up an ice cream shop by my snow-covered garden. I have plastic ice cream cones that we filled with snow and then topped with sprinkles -- big hit. And then I suggested we build a snowman, after which I snapped the photo here. 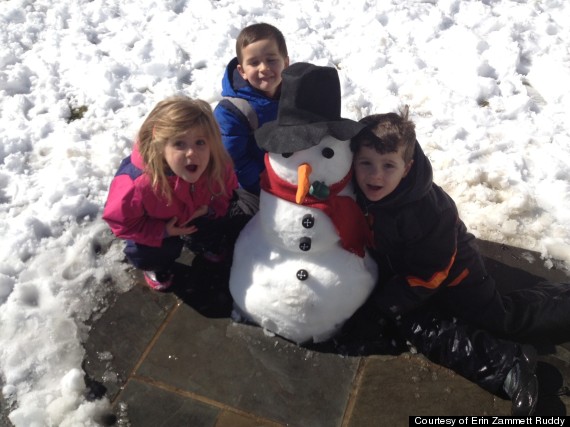 Plus: The Best Digital Cameras for Moms

I thought about posting it on Facebook because I was proud of our little snowman and I wanted to tag my cousins who got us the awesome snowman kit but then I thought ... nope, can't do it. The kids look too cute and happy and sweet. And they honestly were none of the above at that moment. More importantly, nor was I. We'd had good fun playing outside and the kids were getting along at a B-minus level but when it came time to build the snowman, things began to unravel. And it would have felt wrong for people to see this photo pop up in their newsfeeds and think, aw how sweet and fun and what a good mom to be outside playing with her kids and building a snowman with them -- aw, sweet, fun. I would have felt like a fraud since at the time the photo was snapped my blood pressure was through the roof and I had legitimately growled at the kids a few times (they were bickering and whining and wrestling). Sure, he looks cute (thanks to the kit--thanks, Caroline!) and the kids are smiling in this photo but that's beside the point. The snow was wet and heavy, I was sweating and the sun was blindingly bright reflecting off the snow -- hardly the makings of a Hallmark moment. And I was like a stage mom telling the kids how to build a snowman. No, you need more snow! Pack it more! Not so hard! It's not time for the hat yet! Those are the eyes, not the buttons! In my defense, a 3-, 4-, and 5-year-old cannot build a snowman on their own...at least not one worthy of a photo :)

What if a mom who was having a bad day with her brood saw my status update and thought, sh*t, I should be outside with my kids or I should be building a snowman? If that mom can do it, so can I. Well, I couldn't do it. And so I didn't post it. I'm not mad at the people who post shots of their kids doing cool things when the reality of the situation wasn't so great. I see stay-at-home moms to three little ones posting gorgeous shots of their smiling babes painting and the toddlers cooing at baby and I think, dayum, they must know something I don't. Or maybe they just choose to post the nice stuff instead of the behind-the-scenes reality we all know too well. I'm not mad at them. I mean, who wants to see a bunch of motherhood-is-hard posts? Duh! And you guys know how I feel about the constant momplainers. That said, I do think it would have been inauthentic to post that shot on Saturday. Maybe I was influenced by this blog post sent to me by a friend last week. Or maybe I'm just no good at lying. Back in the summer I wrote a post about something similar -- I showed a sweet shot of Alex and Nora eating an ice cream cone, but I also posted the video of what was going on leading up to that shot, which wasn't so sweet. That's life, that's kids (that's my life with my kids anyway) and I like to be as honest as I can about all of it. Especially on this blog. I suppose I could have posted the snowman shot with a disclaimer-type caption, something that was honest and accurate:

Two time-outs, one mom meltdown, lots of embarrassing micromanaging and three kids whining for 30 minutes straight later and I give you ... our snowman. Is it Spring yet?

Maybe that's what I'll start doing. Posting the shots of the cool things I do with my kids but writing accurate, what-was-going-on-behind-the-scenes captions. Stay tuned. In the meantime, do you ever see other moms shots on Facebook and think BS, there's no way that moment is as blissful as it looks. Ever hold yourself back from posting a great picture because you know what was going on in real time wasn't so great?