Nutella popcorn is coated with chocolate and Nutella candy coating, then dried in the oven for a nice, crunchy popcorn that will keep you coming back for more! There's nothing like a big bowl of popcorn while watching movies or the big game. 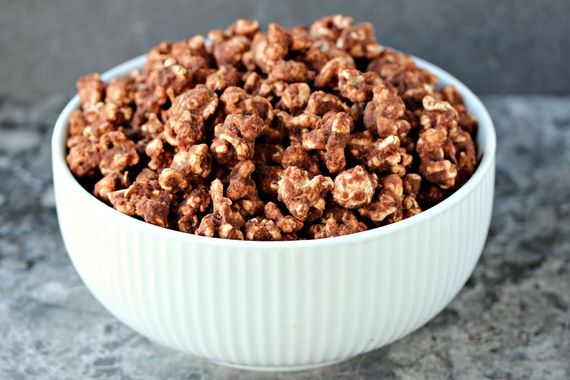 So I've been on a total Nutella kick the last couple of months. I can't help myself. That stuff is just so heavenly. I didn't try Nutella until I became an adult. I never saw the reason to try it. Then one day a friend convinced me to try it and my life was never the same. Okay, that may be exaggerating a bit. Or maybe not.

Not only am I a chocolate fanatic, but I'm apparently I've become a serious Nutella fanatic too. As well as a popcorn fanatic. I can never get enough popcorn in my life. I could eat it every single day and be a happy, happy girl. Honestly there have been days when I've eaten it for dinner. Don't tell hubs.

I'm one of those people who goes to movies just to eat popcorn. I'll pick the movie based on which theatre it's playing at, because I know which ones have the best popcorn. Yes, that really does tell you a lot about me. I'm okay with that. To know me is to know I love popcorn. Far too much. 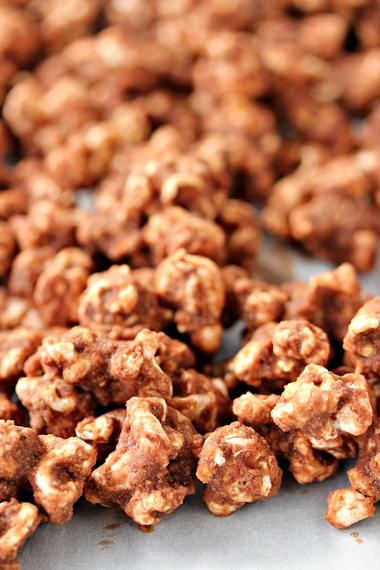 Those who know me well also make sure they grab an extra bag of popcorn at the concession stand if they're with me. My family always gets me my own bag. I'm the official seat saver. The family are the official snack handlers. It works for us. By now they know to get Mom her own page, with extra butter. Plus, lots of napkins, because Mom is popcorn spilling spaz.

I'll usually gobble up about three quarters of the bag, then I act like I'm selfless and hand the bag to others. I'm not selfless at all when it comes to popcorn. Usually at this point I've inhaled so much of it I can't bend down to place the bag on the floor. So it's easier to hand it off to someone else. Then smile sweetly and try like heck not to burp in public. I'm "that" girl. 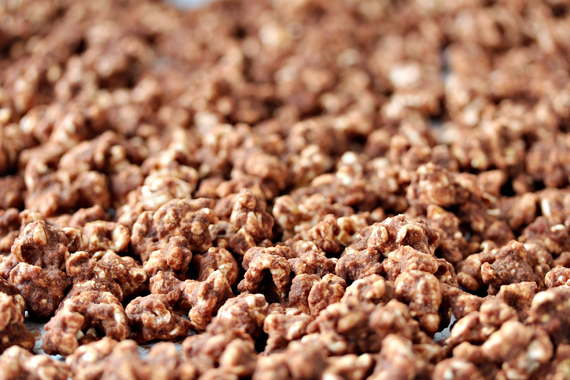 So now that I've revealed I exaggerate, I eat popcorn for dinner, I make my family fetch me snacks, I inhale popcorn without sharing or breathing, burp like a boss, and I pretend to be nice while really handing someone an empty bag of popcorn, I'll wander off with my dignity mildly intact. Or not. It's okay, I'll drown my sorrows in Nutella Popcorn. 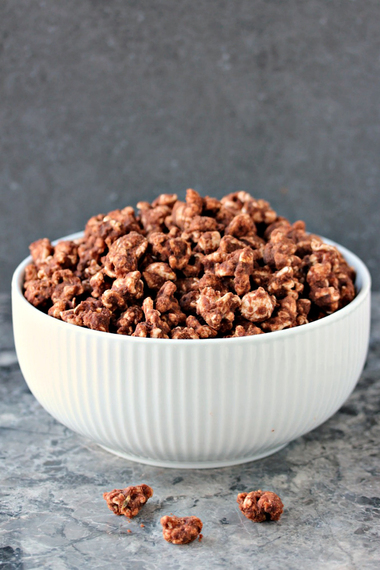 Get the Nutella Popcorn recipe!

Kim covers everything from desserts to grilling on her two blogs,
Cravings of A Lunatic
and
Kiss My Smoke
. At Food Fanatic, however, she's dedicated to all things
Chocolate
, and we're SO glad!