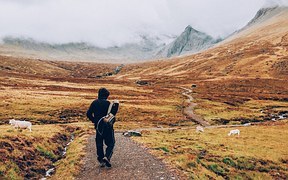 "Failure should be our teacher, not our undertaker. Failure is delay, not defeat. It is a temporary detour, not a dead end. Failure is something we can avoid only by saying nothing, doing nothing, and being nothing." -- Denis Waitley

We are a month into the new year and may you have a whopping failure this year!

It's a brand new year and everyone is wishing you success and prosperity and health and wonderful things -- and I'm wishing you failure?!?

The value of failure is undeniable. If you think about it, hasn't failure caused you to expand and grow and get creative with new solutions to issues? Hasn't failure made you stronger and helped you tap talent and depth you didn't know you had? Isn't failure a catalyst to discovering who you really are?

Then why do so many of us fear failure and avoid it at all costs?

When we try to to stay "safe" and avoid failure, we cut ourselves off from stepping into the life we really desire. We don't submit that screenplay, apply for that promotion, take that qualifying exam or ask that awesome person out.

In last month's column, I wrote about reframing, the ability we teach in Neuro Linguistic Programming (NLP) to see something in a totally new light. It's the ability we have to give meaning to something -- and to change that meaning to a different meaning that empowers us rather than sabotages us.

If there is anything most of us need to reframe, it's our perception of failure!

So let's check out how some very successful people view failure and see if we can adopt their perspectives as our own.

As Tony Robbins puts it, "There is no such thing as failure. There are only results." This is one of the basic tenets of NLP. "Failure" is merely a judgement we slap on a happening. The truth is that we did something a certain way and it produced a certain result. If we want a different result, we now know that we need to do it a different way. End of story.

Maybe you get turned down every time you ask someone for a date. It doesn't make you a failure. It just means you're really good at getting someone to say "no" to you! Congratulations! As Edison said, "I have not failed. I've just found 10,000 ways that won't work." So to find the way that does work, you learn to use...

Failure is a teacher:

People who are successful in life always learn from their mistakes and so-called failures. Michael Korda, editor in chief at Simon Schuster, says, "Never walk away from failure. On the contrary, study it carefully and imaginatively for its hidden assets." And Bill Gates believes that, "It's fine to celebrate success but it is more important to heed the lessons of failure."

Little toddlers know this instinctively. They stumble and bumble around learning to walk. It's fun to watch them figure it out, grabbing onto a table for balance to stand, getting their feet moving sideways then forward. And every time they fall, they just try again, this time with a little more knowledge. They don't do what many adults do: Get self-critical for falling or blame someone else for the fall or decide to give the whole idea of walking up because of the fall! And if these toddlers could talk, they would probably tell you that...

Failure is a stepping stone:

Author C.S. Lewis wrote, "Failures, repeated failures, are finger posts on the road to achievement. One fails forward toward success." Or as entrepreneur Victor Kiam put it more bluntly, "Even if you fall on your face, you're still moving forward!" So-called failure means that you at least tried something. You're in motion. You've stepped out of your comfort zone and attempted a new feat. I applaud you!

The universe doesn't sit still. And as hard as we may cling to what we're used to or are comfortable with or in control of, it's not going to work.

Actor Mickey Rooney believed that, "You always pass failure on your way to success." Salespeople often talk about "sales ratios," or the number of rejections they'll probably get before they make a sale. For example, it may typically take 30 calls to land one new client appointment. Keeping this in mind, good salespeople don't look at rejections as "failure" but just one step closer to the win.

When pursuing a goal, it's important to not let the fifth or fifteenth "rejection" stop you. If you've been capturing the lessons along the way, each "no" is a positive sign. In NLP, we call this "focus," the certainty that once you have set a strong intention in motion, everything that happens next is a step closer. Teacher Florence Scoville Shinn noted, "Every great work, every big accomplishment, has been brought into manifestation through holding to the vision, and often just before the big achievement, comes apparent failure and discouragement."

Failure is a key to living a fully empowered life:

Author J.K. Rowling, who certainly has had her share of both failure and massive success, wrote, "It is impossible to live without failing at something, unless you live so cautiously that you might as well not have lived at all, in which case you have failed by default." I often remind my students that most people on their death bed regret the things they didn't do more than things they did.

That novel you're writing may never hit the NY Times bestseller list. Pursue your dream and write it anyway. I guarantee you'll feel better about yourself than if you just continue to wonder "what if?" without taking action.

Napoleon Hill studied the most successful people of his time. He concluded that, "Every adversity, every failure, every heartache carries with it the seed of an equal or greater benefit." When you reframe your notion of failure from a crushing defeat to something that carries the seed of "greater benefit," why would you ever avoid it?

Failure? Bring it on!

As Paramahansa Yogananda taught,
"The season of failure is the best time for sowing the seeds of success."

Matthew B. James, MA, Ph.D., is President of The Empowerment Partnership. Author of several books, Dr. Matt has trained thousands of students to be totally empowered using Neuro Linguistic Programming (NLP), Huna, Mental Emotional Release (MER) therapy. Sign up for the free e-course. Keep in touch on Facebook and visit his blog at www.DrMatt.com.