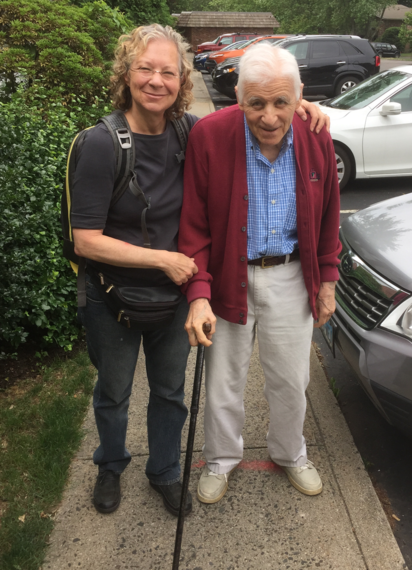 My father began to leave us, mentally, two years ago. We were looking at photos on my mother's computer when he pointed to his granddaughter on screen and called her his aunt. My mother, brother, his wife and I looked at each other aware we'd heard the slip, but we colluded not to hear it. Or at least to leave a sliver of doubt.

For the past two years there's been no doubt. My 92-year-old father has dementia. He speaks less each time I see him, which is about once a month. He can whisper a few words but it's a great effort.

Last year when I would visit, my mother would coach him, "Your daughter Riva is coming today." By time I arrived it seemed to stick; he seemed to know who I was. Now little sticks. We spent last weekend together yet he didn't know who I was until Sunday night. He walked into the kitchen, smiled, and said pointing to my mother, "Your mother making dinner."

In that moment he identified us both. For he no longer knows my mother either.

Last year he thought she was his sister and worried every night that she wasn't leaving in time to get home safely. Now he asks me with a lopsided grin, "Who is that?" shaking his head forlornly. He doesn't know his wife of 65 years who now bathes him, dresses him, cuts his food, ties his shoes. The woman who found him going through the kitchen drawers at 4 a.m. holding a hammer, pliers and knife looking for more tools; his tooth was bothering him and he was going to fix it. The woman who had to put an alarm on the front door for fear he will open it and walk away. And had to put an alarm around her own neck in case something should happen to her. For then, what will become of him?

It breaks my heart every time I see him. Not because he doesn't know who I am, I don't care. But because I am falling in love with the father I grew up hating. And now there is precious little time left to have this love affair. It is starting as it is ending.

My father was diagnosed with clinical depression when he was 55. Until then he was angry, moody, sullen and self-absorbed. He was not the father who takes you to ball games or ice skating. He was not the father who asks at the dinner table, "How was school?" Or when I came home from Europe, "How was your trip?" He was the father who once home from work sat in the living room, silent, with a book and a drink. He was the father I experienced as emotionally absent and whose depression made him also at times emotionally abusive.

I knew the story of his own childhood. Two of his three brothers both died when they were 16 years old. One from tuberculosis the other from an accidental fall while climbing a rope in the school gym. My father's mother never recovered from the loss. So she doted on her youngest child, my Aunt Shirley, the only girl in the family. My father became lost in the shuffle and for years wished he was Shirley.

When my father was put on depression medication it took away the anger. It also took away any emotional vibrancy. The dementia has similarly kept him docile, but added a sweetness I have never known before. Sweet, vulnerable and helpless is a wicked mixture; it will break your heart.

My father spends his time sitting on the couch staring at the TV screen but takes little in. He often looks at me as if to say, "Who are you?" "Why are you here?" "What am I meant to do now?" An avid reader his whole life, he picks up a book from the side table, flips the pages, but takes nothing in. He wanders across the living room to the window and stares at a rock or a leaf or a candy wrapper outside. He wants to go and tend it, until my mother calls him back to the couch.

Each time I see him he has lost more ability to speak, hear, comprehend, do. As my physician assistant friend said, "His body is outliving his mind." Yes, that is exactly so. He no longer understands why my mother calls him to the dinner table, or puts his jacket on him to go outside, or lifts him off the couch to get into the car so they can return me to the train station. But he goes along like a baby lamb following its mother. So that when he looks at me and smiles, trusting me for no reason, my heart breaks. These days all I want to do is stroke his cheek, take his hand or put mine over his heart.

It is cruel that God has made me fall in love with my father after 61 years. When I use to think about his passing, I thought I would miss him from time to time but no big deal. Now I am already devastated.

I posted the above on my blog, DiabetesStories, seven months ago. Just after Thanksgiving last year my mother put my father in a nursing home, after two exhausted years of caring for him. 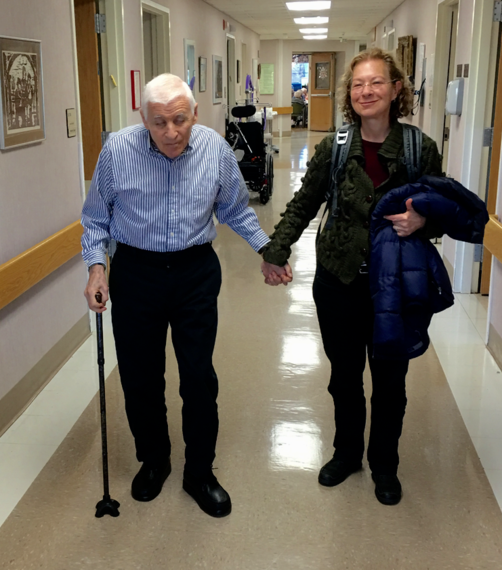 I visit him there now. It is an excellent nursing home. The staff are phenomenal, so caring and each patient has his/her own aide. Yet it is an institution.

My father is on the dementia floor. Most of the patients there are in wheelchairs, many are non-communicative. When I first arrive my father, who still walks and somewhat talks, is sitting in the communal dining room amid what looks like a flock of shell-shocked flamingos.

When I visited last weekend my father spotted me through the glass of the dining room and grinned like a five year old on Christmas Day. Never mind that this is a Jewish nursing home. I danced into the room, to the music playing in the background, and his beatific smile grew larger as I got closer.

Before my mother and I leave she puts him down on his bed to take a nap, shoes and all, not to distress him. But he immediately stiffens wondering what is happening. His eyes convey a mild panic. Where are you going?

I turn to leave because there's nothing else I can do. It troubles me that this is how too many of us leave the world. And my heart breaks all over again. 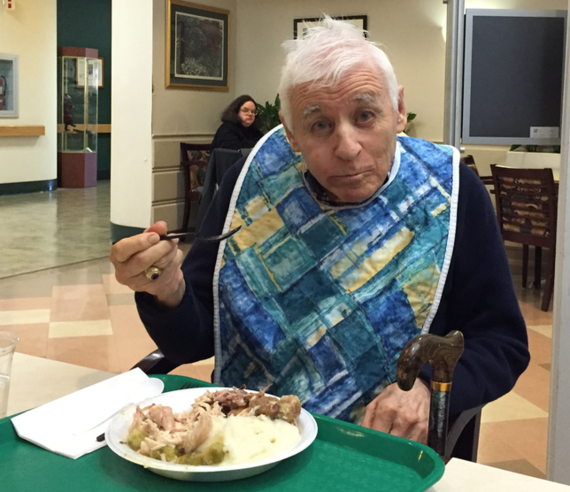 Riva is the recipient of the 2015 IDF Award for education and advocacy. She has written three books, Diabetes Dos & How-Tos, 50 Diabetes Myths That Can Ruin Your Life and the 50 Diabetes Truths That Can Save It and The ABCs Of Loving Yourself With Diabetes. Riva speaks to patients and health care providers about flourishing with diabetes. Visit her websites DiabetesStories.com and DiabetesbyDesign.com.