The sun has only barely begun to peek over the horizon but the faint brightness of the early morning sunrise stirs me in my sleep. I start to wake and for a brief moment I feel almost normal -- perhaps even happy -- suspended in a blissful state of ignorance as the sleep begins to leave my body and my mind wakes and adjusts to its surroundings.

Almost within the same instant, I am paralyzed, I can't move or breathe, and an overload of anxiety begins to fill every fiber of my being. Reality sets in and I am suddenly all too aware that I am under a bridge and surrounded by cold concrete ringed with the piercing smells of asphalt and urine.

There were always moments like this, moments where I'd have to remind myself where I was and who I'd become. My mind seemed to be going through this process of rejecting its surroundings -- unable to fully accept the present -- I would constantly find myself lost in vivid memories of my past as if my psyche was trying to remind me of who I was, and then within the same breath, I'd feel the harsh pangs of depression arise as I remembered my reality.

I was homeless, forgotten, abandoned and alone. A product of the Texas foster care system, I had no one.

My life was reduced to two pairs of cloths, a well-worn backpack, and the streets. By day, I begged strangers for their change; and by night, I was turning tricks for a place to stay, a shower, a hot meal, or whatever resources I could trade my body for.

That was my reality.

The many years I had spent growing up in foster care took away any chances I had at a normal life. I lived in over 20 different homes -- sometimes moving every six to eight months -- never staying in one place long enough to create support systems, build community, or establish roots. Sometimes, I think that maybe this was for the better because almost all of the 20-plus homes I lived in were imbued with abuse.

By the time I was 18, I had been raped and beaten more times than I care to remember -- often by the very people the state of Texas was paying to "care" for me.

On the streets, I found out very quickly that there aren't a lot of resources for homeless youth in Houston, especially if you're gay. I remember once being turned away from the Covenant House -- a homeless shelter that caters to youth -- after an intake worker determined I was gay and erroneously suggested that I "probably had AIDS" and would be a risk to other youth in the shelter.

So I learned to make due with what I had. Most nights, I would wander the streets in Montrose until someone picked me up. Sometimes I'd get lucky and they'd let me spend the night, but more often then not, I'd be forced to sleep on the roof of a shopping strip in the north side of Houston -- no more than 10 blocks away from the group home I was living at when I aged out of the system and into homelessness.

I spent the next six months on the streets doing this over and over again, living day-to-day, surviving through the street economy -- alone, ashamed and guilt-ridden.

One day in August of 2010, I was in downtown Houston searching for an air-conditioned space and a restroom and ended up wandering into the University of Houston-Downtown.

That day, the course of my life changed.

Youth who age out of the foster care system in Texas are eligible to utilize a tuition waiver that covers the complete costs of tuition and fees at state-funded institutions of higher education within the state.

It was on that fateful day in August that I found out about this waiver, and with the help of university staff I registered for classes and applied for financial aid. I spent the majority of my first semester homeless, struggling to keep up with my course work -- but eventually, I would receive a refund check for about $2,000 that I used to get my first apartment.

I live in that very same apartment today, and in May of this year, I will graduate from the University of Houston-Downtown with a bachelor's degree in social work.

My life was, still is, and will always be worth something.

I wasn't a lost cause, a degenerate, or a waste of space. I was a human being, a person, and a youth, who because of my life's circumstances ended up on the streets. But with the right opportunity, I was able to surpass those circumstances and accomplish so much in such a short period of time.

I've advocated for greater protections for foster youth, testifying countless times before committees in Congress and the Texas legislature. I've worked to elect progressives to public office -- most recently, working for Senator Wendy Davis' gubernatorial campaign. I've won national leadership awards from the Human Rights Campaign and the National LGBTQ Taskforce, and I've even had the chance to intern on Capital Hill for Senator Patty Murray inspiring her introduction of the 2014 Tyler Clementi Higher Education Anti-Harassment Act. 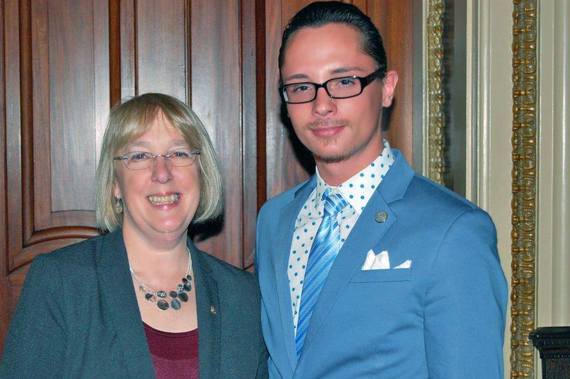 Yes, at one point in my young life I was homeless, but by the grace of God I am now a strong, resilient and intelligent contributing member of my community.

I am worth something -- and so is every other homeless youth.

My life is proof that we can change the future of thousands of youth forced into homelessness by simply valuing their lives, making investments into their futures, and recognizing that they are worth more than a few bucks and some leftover lunch.

I share my story to tell you that there is hope, there is life after homelessness, and our lives do matter. We are the future. Invest in us, value us, recognize our worth, and watch us soar to unimaginable heights.