Just when you thought the long-running and bitter Chevron/Ecuador legal battle could not get any more bizarre, it does.

Legal briefs recently filed in a U.S. court revealed that for 50 days Chevron lawyers prepped their million-dollar star witness about a bribe alleged in the oil giant's retaliatory RICO lawsuit against a group of Ecuadorian indigenous peoples and their U.S. lawyer. (See page 61 of this legal brief.)

It took Chevron that long to try and get Alberto Guerra's story straight.

Turns out even that attempt failed, as appellate briefs filed by the Ecuadorians and their attorney, Steven Donziger, make clear.

Guerra is a former Ecuador judge who got kicked off his country's legal bench in 2009. 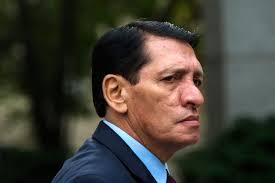 Under oath, Guerra admitted to taking up to 40 bribes (See page 2.) in other, unrelated cases.

Guerra also admitted, under oath, that his original testimony to Chevron was "not true" about the alleged bribe of the Ecuador trial judge, Nicolas Zambrano, who ruled against Chevron in 2011, awarding the Ecuadorians $9.5 billion for oil contamination damages in the Amazon rainforest.

By the time Chevron had finished with him, he had changed his testimony three times, and the changes were not minor. (See pages 55-57.)

Story No. 1: Guerra alleged the Ecuadorians' attorneys "ghostwrote" the Zambrano judgment and hired Guerra to edit it, which he said he did on his home computer. But when Chevron couldn't find the judgment on his computer, Guerra recanted.

Story No. 2: Actually, Guerra said, the verdict was on a flash drive that Zambrano gave him at the Quito airport. But when Chevron couldn't find the judgment on any flash drives, Guerra changed his story yet again.

Story No. 3: Actually, Guerra said, he traveled to the jungle on a bus and edited the judgment there on a laptop owned by one of the Ecuadorian attorneys.

As each story unraveled and evolved, Chevron agreed to pay Guerra more money for testimony the company desperately needed for its RICO trial to "prove" Guerra's claim that lawyers for the villagers sought to bribe Zambrano with a $500,000 payment for their $9.5 billion judgment.

Last count, Chevron had committed to paying Guerra at least $1 million (See page 160.) for his testimony, with another million likely to come if one counts the cash and benefits going forward.

Under oath, Guerra admitted he "exaggerated" the evidence to jack up the money or, in his words, "for the purpose of bettering or improving my (financial) position" with Chevron. (See pages 55-57.)

Based largely on this tainted testimony -- fraught with hearsay problems described below -- U.S. Federal Judge Lewis Kaplan ruled that the Ecuador judgment was fraudulent; that Ecuador's entire court system is corrupt through and through, and the Ecuadorians and their attorneys are prohibited from collecting the damage award ever in any country in the world.

Why Kaplan thinks he can block collection of an Ecuador judgment as well as sit in judgment of another country's judiciary is too complex a story for this post. (You can read more here and here about Kaplan's bias and his flawed findings.)

Let's just say no U.S. judge that we know of other than Kaplan ever has tried to do such a thing. And the last time Kaplan did it -- in this very case, without as much as an evidentiary hearing --- the 2nd Circuit Court of Appeals in New York unanimously reversed him one day after oral argument. The Ecuadorians and Donziger have appealed once again.

But Kaplan's decision to allow these payments -- what Kaplan himself called a "private witness protection program" -- was central to proving Chevron's case.

The huge sums Chevron is paying Guerra go way beyond "reasonable" compensation, as allowed by New York law, according to this affidavit written and filed pro-bono by a leading legal ethics expert at the University of California/Irvine School of Law.

Prior to the RICO trial, the Ecuadorians and Donziger filed a motion to have Guerra's testimony struck.

The motion, which Kaplan denied, began to lay out how Guerra's testimony evolved as Chevron paid him ever-increasing sums to change his story as his previous versions became discredited. The appellate brief nailed it.

The only evidence Guerra produced was largely third-party, hearsay evidence. For example, a deposit slip that purported to prove the Ecuadorians' lawyers deposited money into Guerra's bank account was not an original, only a supposed copy that Guerra said he obtained from the bank. Chevron and its legions of lawyers and investigators never attempted to obtain the original or a copy or confirm the authenticity of the deposit slip from the bank, even though they have looked under every rock possible in this case.

Guerra also kept a daily planner -- he had for years, if not decades. Yet when it came time to produce the planners to Chevron, he claimed he "lost" the volumes for 2009 and 2010, the two critical years, which would have corroborated his testimony. But he was more than happy to provide later years, after the judgment was issued and during the time when he would have been plotting on how to sell his testimony to Chevron for the highest dollar.

It would be easy to write that Guerra played Chevron for money, but Chevron knew better.

Company lawyers in Quito already had experienced firsthand Guerra's willingness to sell his services. In 2009, after being kicked off the Ecuador court, Guerra told Chevron lawyers he could, for $1 million, arrange for Zambrano to write a favorable judgment. Curiously, the lawyers met and spoke with Guerra several times but took no action, other than to prepare affidavits detailing the conversations.

More curious is the fact that Chevron never exposed the Guerra bribery offer to the oil giant until a few months before the RICO trial four years later, even though the company was lobbying the U.S. Congress furiously in 2009, accusing the Ecuador judiciary of corruption. And in 2011, when Zambrano was preparing the judgment, Chevron said nothing about Guerra's claim that he could turn Zambrano.

During the RICO trial, Zambrano testified that Guerra told him Miami-based Chevron lawyer Andres Rivero said Chevron would pay Zambrano $1 million if he would back up Guerra's bribery allegations against the Ecuadorians' lawyers but Zambrano refused and later took the stand in Kaplan's court, denying all of Guerra's bribery charges, even though he was under no legal obligation to do so.*

See this transcript of a conversation Guerra had with Rivero about being paid for his (Guerra's) testimony and obtaining Guerra's help in arranging for a meeting with Zambrano. (See Exhibit One, pages 44-51, 58-68).

When Guerra handed over a few of his documents to Rivero and an investigator from Kroll, Rivero recorded their conversation, later obtained through discovery. What follows is only some of what was said: (See page 54.)

GUERRA: "[A]ctually, actually ... I have some attachment to that (the documents), right? All the information I have there.

CHEVRON LAWYER ANDRÉS RIVERO: That can be fixed.

[CHEVRON] KROLL INVESTIGATOR 5: You will become more attached to what you can buy with the money we pay you. [LAUGHS]

GUERRA: It helps, but, but it's so little.

KROLL INVESTIGATOR 5: "[W]e'll make a deal on the way to your house. This is what we have in cash. Between now and afternoon's end we'll have managed to have a little more. How much is it?

RIVERO: How much? Not when. I said how much. [LAUGHS]

And, presto, that is what he has been paid in cash, monthly payments, services and benefits as described in a two-year contract with Chevron that leaves open the option of renewing it for a longer period of time. In fact, the total could easily top $2 million as the legal battle plays out: (See page 33.)

In addition to payments, Chevron also granted Guerra and his extended family the golden pot at the end of the rainbow: a free pass to America. Chevron obtained U.S. visas for Guerra, his family and his son's family in Ecuador and is paying for all of his family's immigration legal bills.

Chevron also reunited Guerra with a second son, who was living in the U.S. illegally with his family. Chevron is now paying for this son and his family's immigration attorney, a benefit not disclosed initially.

In its contract with Guerra, Chevron said "[n]o payment is contingent on the content of Guerra's statements or testimony" but this thinly-veiled inducement of favorable testimony makes a mockery of our justice system.

It should be noted that the U.S. judge who declared Ecuador's courts corrupt -- Lewis Kaplan -- allowed Chevron to pay Guerra $1 million plus for the testimony it needed to win in his courtroom in a "trial," where Kaplan denied the Ecuadorians and Donziger a jury at the last minute so he could rule alone.

Today Chevron argues Guerra is no longer safe in Ecuador, but the only thing Guerra has to fear in his home country is being arrested for admitting on the stand in a U.S. court he took up to 40 bribes when he was an Ecuadorian judge.

Instead, he and his family will enjoy a new life, financed by Chevron in the latest tortured and unjust attempt by the company to evade accountability for its environmental disaster in the Amazon rainforest as confirmed by three layers of courts in Ecuador.

*CORRECTION: An earlier version incorrectly stated that Guerra testified Chevron offered Zambrano $1 million. Zambrano testified that Guerra told him Chevron would pay him the money to testify against the Ecuadorians, and he refused.