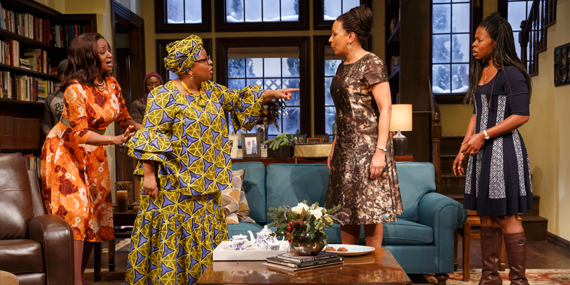 Familiar is a brilliant ode to family life. Extremely well written, its pacing is unbroken and a pleasure to follow. Playwright, Actress Danai Gurira is a superb storyteller, matched with formidable director Rebecca Taichman, they have created something special. A tightly woven endearing tale, Familiar is about a family from Zimbabwe who have comfortably settled into middle-class life in Minnesota, or so it seems. Marvelous, played by the very marvelous Tamara Tunie, as the commanding and surly matriarch, is a delight, as she roils with her inconspicuous husband Donald, nimbly played by Harold Surratt, who is constantly replacing her decorative floral painting for a map of Zimbabwe. Their daughter, Feng Shui expert and singer Nyasha (Ito Aghayere) returns home for her sister Tendi's (Roslyn Ruff's) wedding, while her Auntie Anne, (played by Myra Lucretia Taylor, who gives her character outstanding voice), comes from Zimbabwe to make a special marriage ritual for the occasion.

Ito Aghayere gives an exceedingly enjoyable performance, light and airy, but full of depth and warmth, as the younger sister to Tendi. Roslyn Ruff who plays Tendi, seems slightly forced, with a New York City like hard edge, which doesn't quite ring true for her Minnesota upbringing and Christian leanings. Though a character with good reason for anger, not good to play it as a theme in her portrayal this complex bride to be. Her betrothed Chris (Joby Earle) deftly plays the nice guy wanting to make everything right and good. His brother Brad (Joe Tippet) is likable and lovable as the younger brother wanting so much to be helpful and is far from right, but totally good in his desire to want to help his brother and everyone else. Auntie Margaret, portrayed by Melanie Nicholls-King, is no less beautifully played as the rest of the ensemble, making Familiar one of the best productions on family life I've seen in a long while.