Having lived, studied and traveled in Mexico for almost 30 years, I can personally attest to the intimate and familiar nature of death in popular culture.

Long before Santa Muerte's (Saint Death) public outing 11 years ago to the date (Nov. 1), images of death personified abounded. Most visibly, Catrina Calavera (Skeleton Dame), a high society woman depicted as a skeleton in fashionable early 20th-century attire, is omnipresent in Mexico. Created in 1913 by the great graphic artist and satirist, Jose Guadalupe Posada, La Catrina has curiously even made her way on to more than a few Santa Muerte altars. And it was no coincidence that the godmother of the cult of Saint Death, Doña Queta (Enriqueta Romero), publicly displayed her life-size statue of the Bony Lady on the first of November (All Saints Day), the first of two days of the dead, dedicated to infants and children, in which many Mexicans head to the cemeteries and, in a mix of festivity and solemnity, commune with their departed love ones. Sugar skulls bearing common first names, such as Maria and Jose, are sold in the streets, and at home, altars are erected bearing the favorite food and drink of the deceased family member. Growing up in Morelia, my wife always felt left out due the absence of candy skulls bearing her name "Fabiola."

In a similar vein, for most devotees Santa Muerte is neither grim nor satanic. Instead, she is a saint who is as familiar to Mexicans as death itself. And her familiarity is reflected in her most common nicknames: Skinny Lady, White Sister, Godmother, Co-Godmother, White Girl and Pretty Girl. As godmother and sister, the saint becomes a supernatural family member, approached with the same type of intimacy Mexicans would typically accord their relatives. Much, of course, has been written about the uniqueness of the concept of death in Mexican culture. In his illuminating book on the subject, "Death and the Idea of Mexico," anthropologist Claudio Lomnitz even argues that death is totemic of the nation itself; that along with the Virgin of Guadalupe and 19th-century president, Benito Juarez, the figure of Catrina Calavera, the "playful skeleton." is one of the three great totems or powerful emblems of Mexicanness.

Such familiarity with death really struck me at Doña Queta's famous Santa Muerte shrine in Mexico City where elementary school-age children would often accompany their mothers and siblings. With the great exception of Halloween, I imagine many American kids recoiling in horror at the sight of a ghoulish skeleton with waist-length jet black hair. Even on the night of trick-or-treaters, many American children aren't immune to the fright caused by ghouls and goblins. In fact, my father came close to losing a long-time friend when on a Halloween eve in the early 1980s he and I appeared at the door of family friends in skeleton masks and unintentionally scared the dickens out of his young daughter. Back at Doña Queta's, her renowned statue of the Grim Reapress is met with familiar nonchalance on the part of visiting children. Perhaps even more striking was the scene at Guillermo's esoterica shop in Morelia, where the young children of the owner played tag and kicked a soccer ball amidst hundreds of images of the skeleton, including a few eye-catching statues sculpted from volcanic rock, which at some six feet tall towered over the playful children.

It is not only the Bony Lady's skeletal figure that makes her familiar to devotees but also her shared nationality. Offerings at her altars, her nicknames and wardrobe reveal a saint that is cosmically Mexican. In other words, at one level her adherents view her as a supernatural version of themselves. Tequila, beer, cigarettes and chocolate are placed at her altars in the belief that the White Girl enjoys consuming the same food, drink and smokes that devotees derive pleasure from. And like her adoring followers, she occasionally drinks to excess. In Morelia, cult leader Vicente Perez Ramos claimed that his skeleton saint likes to "get hammered" sometimes, drinking her favorite brand of tequila, Rancho Viejo. Mexican folk saint and "patron of narcos" Jesus Malverde also drinks, smokes and even does lines of cocaine, but I can think of no other female folk saint who shares a joint or glass of beer with her devotees.

In a similar vein, the nomenclature of her nicknames not only expresses kinship but also camaraderie. Skinny Lady, Bony Lady, White Girl, and Pretty Girl are all common monikers heard throughout Mexico and many places in the U.S. The latter two are terms of endearment that recall the type of language employed by devotees of the Virgin of Guadalupe and other advocations of Mary. In contrast, the former two, Skinny Lady and Bony Lady, capture the jovial familiarity with which many Mexicans, especially the working class, address each other. While Saint Death's traditional garb, the black habit of nuns, evokes medieval Europe, recent makeovers of her image have resulted in a more Mexican-looking saint. Although Doña Queta gives the cult's most famous statue a monthly wardrobe change, the only significant alteration is in the color of the dress, which is the same style gown worn by the various representations of the Virgin in Mexico. Most Mexican of all, however, is the full-size statue of Santa Muerte wearing the green soccer jersey of the Mexican national team. One can imagine her hearing prayers for revenge and victory against archrival -- Team USA. 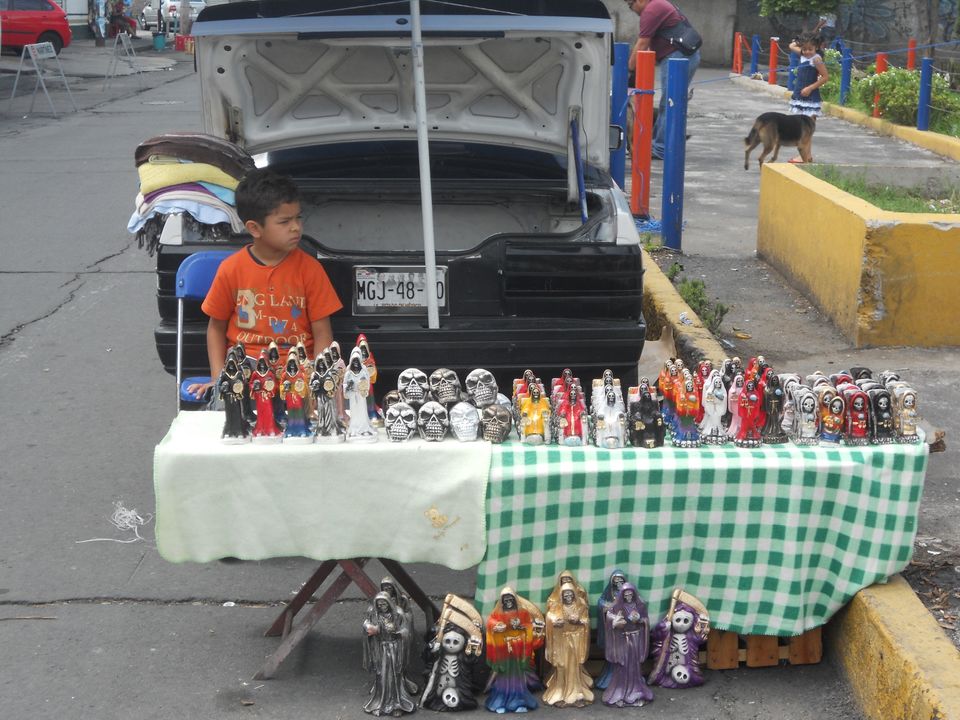