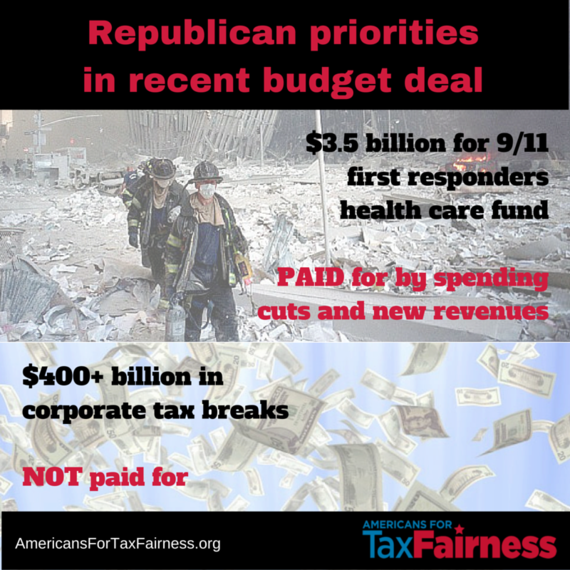 Surprisingly, Congress's $680 billion holiday-season tax deal will bring some cheer to working families and not just to big corporations this year. Refundable tax credits putting extra cash in the hands of hard-pressed workers and parents were included in a huge year-end gift-wrapped package of tax breaks--the type of bill that usually only offers big rewards to corporate fat cats.

Every two years for the past few decades, Washington has renewed a collection of about 50 temporary tax breaks, called "tax extenders." Even though some of them had been repeatedly renewed for 30 years, the giveaways were deemed temporary to hide their substantial $50 billion annual cost--80% of which benefitted businesses. It's an accounting trick. Tax cuts supposedly expiring in a year or two don't make long-range budget projections look so bad, after all.

None of these corporate tax breaks are ever paid for--for instance by closing other corporate tax loopholes. All of the cost goes straight to the deficit.

Moreover, a repugnant double standard is at work. Any time our side wants even a little bit more in spending to improve public services, conservatives demand it be paid for. They even thumbed their noses at 9/11 responders recently.

Conservatives demanded that a renewal of the 9/11 first responders World Trade Center Health Program and a Victims Compensation Fund, costing a total of $8 billion, be paid for in order to be included in the year-end budget package that included $400 billion in unpaid-for corporate tax giveaways.

Tax extender legislation has always enjoyed strong bipartisan support. It's a veritable lovefest between both parties and their corporate contributors.

As usual, though, corporations wanted more. Objecting to the (theoretically) temporary nature of their special breaks, this year they pushed to make several of their biggest billion-dollar loopholes permanent. This gave our side leverage to demand major concessions in return.

Progressives rallied around two tax credits that are very important to low- and moderate-income households--the Earned Income Tax Credit (EITC) and the Child Tax Credit (CTC). Improvements made to these pro-work and pro-family programs were scheduled to expire in two years. This would have pushed 16 million people--including 8 million children--into or deeper into poverty.

Advocates demanded--and won--that any corporate tax cut package had to also make permanent the improvements to these effective poverty-fighting programs. That means a single mom working minimum wage with two kids at home will have $1,725 more in her pocket, for example.

Another victory was the renewal of the American Opportunity Tax Credit. It provides a tax credit of up to $2,500 per year for expenses incurred while attending college such as tuition, fees and course materials. This will give a helping hand to millions of families struggling with the costs of higher education.

Of course, corporations still got more: more than $400 billion in undeserved tax favors. Among them are two loopholes that make it easier for multinational firms to stash profits offshore in tax havens. The Active Financing Exception was permanently enshrined in law while the CFC Look-Through Rule was extended for five years. It was the AFE that helped General Electric to go five straight years without paying any federal income tax, and in fact get billions in refunds.

Together, the two tax breaks will cost the American people around $85 billion in lost revenue over the next decade. Alternatively, if we didn't plow $75 billion of that money back into overstuffed corporate treasuries we could guarantee preschool for every low-and moderate-income four-year-old in America for 10 years.

Another gratuitous gift called Bonus Depreciation--originally intended as a recession fighter, and not even good at that--will go on for another six years, losing $28 billion in corporate tax revenue.

Congress should not be making any corporate tax loopholes permanent or even temporarily extending them. It should be closing them.

Over the past half-decade of budget austerity, American families have withstood $2.7 trillion in spending cuts in everything from senior nutrition to college financial aid to affordable housing. America's corporations haven't contributed a nickel in extra tax revenue.

I'm not sugar coating our challenges with a lot of holiday cheer. Progressives won some, but lost a lot, in this big fight.

We have a long way to go towards the day when corporations routinely pay their fair share of taxes and families and communities get the public services they deserve. It may sound like a Christmas miracle today, but we can get there.

Frank Clemente is executive director at Americans for Tax Fairness.