The FAMILY act would create a national policy of paid parental leave. Why I think this is a great idea. 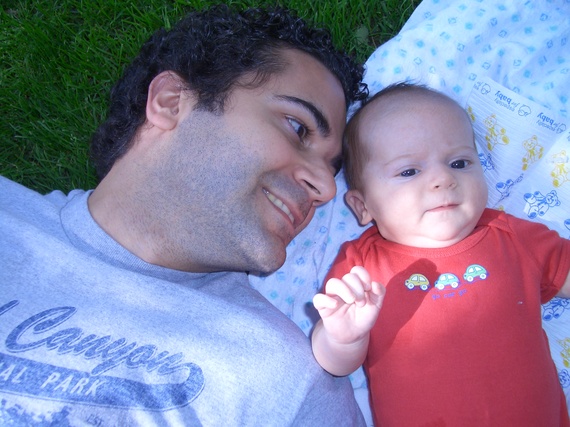 I was extremely fortunate to spend the first few months of Nick's life at home. I hope that more dads become able to take paternity leave to have similar experiences

When I was on NPR last week (you can listen here) to discuss paternity leave, we took lots of great phone calls from listeners. Most callers lamented their lack of available paternity leave.

One caller, however, had lived in Montreal, where new dads are entitled to up to 5 weeks of paid leave, with wage replacement up to 70% of one's earnings. It is no wonder that more than 80 percent of new dads in Quebec take paternity leave. (for more on the benefits of paternity leave, see here)

The caller discussed how important parental leave was for family bonding and for him to adjust to his role as a dad. He also stated that Quebec's other social policies, such as maternity leave and subsidized day care, were also truly family-friendly. 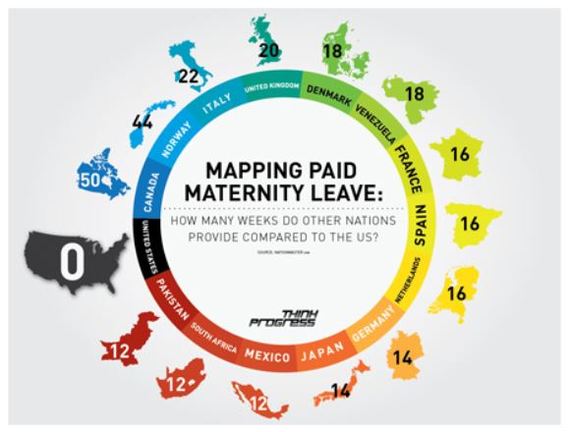 A comparison of legally mandated parental leave policies across many countries. Notice the outlier country here- the USA (from ThinkProgress)

For a country that talks a lot about "family values," our policies sure don't measure up. But perhaps, as Bob Dylan said, "The times, they are a'changin'"

In 2002, California pioneered the first paid family leave law in the US; it provides for employees (both women and men) to take six weeks of paid leave at 55% of their regular pay (up to a weekly maximum) for parental leave or caring for an ill family member.

New Jersey and Rhode Island have since enacted similar state-level programs (I wrote about Rhode Island's program a while back, see here). In fact, another caller stated that, thanks to New Jersey's parental leave program, he was able to take a paid paternity leave, and doing so was transformative for him and his family. He felt that his paternity leave enables him to be a more involved father and for their family to share caretaking responsibilities.

In all three states, the costs associated with paid leave are funded through a small paycheck deduction (about $36 a year)--just like how disability insurance is funded. The initial evidence shows that these programs work, especially for men. As Liza Mundy recently reported in the Atlantic:

Since California instituted its program, the percentage of "bonding leaves" claimed by men has risen from 18.7 in 2005 and 2006 to 31.3 in 2012 and 2013. A study by the economist Eileen Appelbaum and the sociologist Ruth Milkman showed that initial concerns that the California law would be a "job killer" were unfounded, and that workplaces have figured out effective and creative ways to cover for leave-taking parents. The biggest hurdle seems to be getting the word out, particularly among lower-income families that could benefit enormously from the program. (Part of the beauty of the California policy is that it extends leave to men in non-white-collar jobs.)

These policies move beyond "lip service" to the importance of families, have the potential to make families stronger, and provide many obvious benefits for mothers, fathers, kids, and society.

The genius of federalism is that it provides for public policy experimentation. Recently, states have experimented with such issues as marijuana legalization and marriage equality. Once policies prove beneficial on a statewide basis, they sometimes become federal law. And now there is a chance* for this to occur regarding paid family leave.

From the Center for American Progress:

The Family and Medical Insurance Leave Act, or FAMILY Act, is a proposal for paid family and medical leave from Sen. Kirsten Gillibrand (D-NY) and Rep. Rosa DeLauro (D-CT). The legislation would provide up to 12 weeks of paid leave each year to qualifying workers for the birth or adoption of a new child, the serious illness of an immediate family member, or a worker's own medical condition. Workers would be eligible to collect benefits equal to 66 percent of their typical monthly wages, with a capped monthly maximum amount of $1,000 per week. (You can read more about this in Senator Gillibrand's HuffPost article)

As in the three state programs, this federal program would be funded by a small payroll tax. While this funding mechanism takes a burden off employers, it does create a system in which all employees are paying into a system for a benefit from which some may not collect. 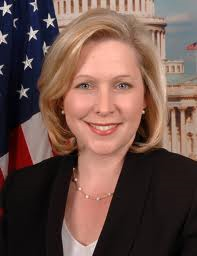 Senator Kirsten Gillibrand is a co-author of the FAMILY act

On the one hand, some will bristle at having all employees, including those without children, subsidizing those who choose to have children. On the other, society as a whole benefits when families are supported and parents have the resources to raise their children well. And the FAMILY act would be a huge improvement over the unpaid leave afforded by the current Family and Medical Leave Act.

In an ideal world, a legal solution would not be needed. Employers would be far-sighted enough to understand that acknowledging and accommodating work-family demands helps attract, retain and get the best out of a high-quality workforce. Considering the competition for highly qualified workers, you would think this is all the incentive employers would need.

But considering how far the US is behind other countries when it comes to parental leave and other work-family policies, I think a legislative solution is welcome and long overdue.

What do you think about the FAMILY act? paid parental leave? Any experiences to share? Let's discuss in the comments section.

* Considering the current state of gridlock in Washington, the chance right now is slim. But change does have a habit of coming very slowly until it occurs very quickly.