Fox announced plans this week for a cartoon crossover event with two of the most recognizable animated families on TV. "The Simpsons"/"Family Guy" mashup episode will air later this year as the Griffin clan embarks upon a trip to Springfield.

The network released two new images from the crossover event. In the first, Bart teaches Stewie how to shred on a skateboard. 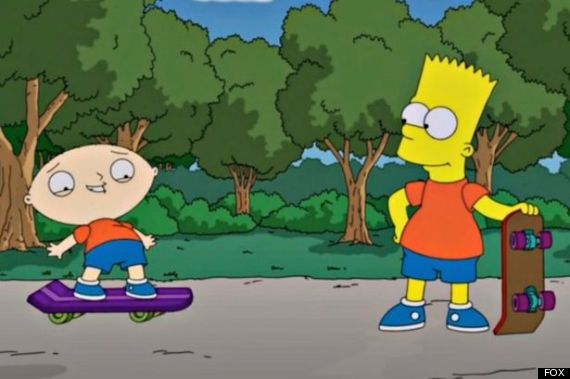 According to a synopsis, the families take to each other pretty quickly. Lisa works to build Meg's confidence by finding something she's good at, Stewie idolizes Bart and admires his penchant for pranks, and Marge and Lois embark on a little girl bonding adventure.

But not everyone is happy sharing screen time. After mistaking the Griffins for albinos, Homer and Peter brawl over the only thing both patriarchs care about: beer. 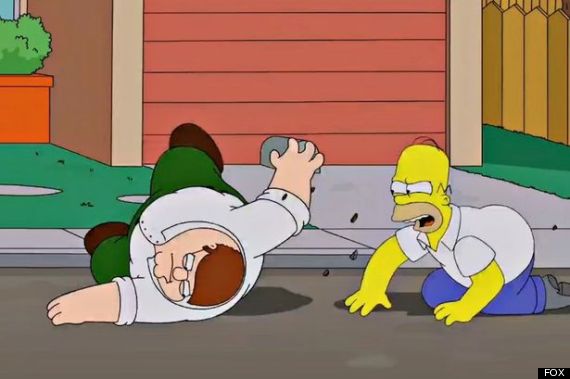 The hour-long special is being helmed by Seth MacFarlane and his team of writers and will be aired during the upcoming season of "Family Guy."

1 / 16
The Simpsons Season 24
In the 23rd annual "Treehouse of Horror," we go back to ancient times when a Mayan Homer and Marge are witness to the prediction that 2012 will be the end of the world, the Springfield Subatomic Supercollider creates a black hole that terrorizes the city, a little unholy pact Marge when she was younger makes things go bump in the night and Bart travels to 1974 to buy a comic book at cover price but inadvertently disrupts Homer and Marge's courtship in the all-new "Treehouse of Horror XXIII."
Fox