I previously questioned a stimulus package that disproportionately creates jobs filled by men - a point now made more persuasively by Linda Hirshman. But I have since realized that men are losing many more jobs than women in the current recession. A housing bust, which crippled construction, led to steep losses in manufacturing. In the previous recession (2001-02), technology declines led the way, dumping women almost as much as men. For the same reason, this recession is also hurting employment for those with less education much more than those who have been to college. 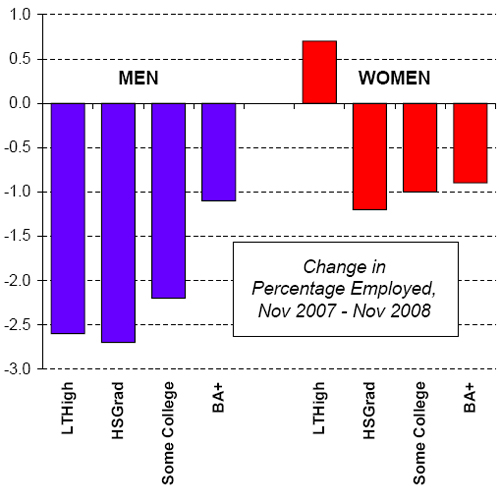 The only group for whom employment rates are up is women with less than a high school diploma. However, this is the group with the lowest overall employment rates, now just 30%.

Now I'm thinking about the implications of this pattern for families in the current recession. From children's point of view, women's jobs might matter more, since children are much more likely to live with their mothers. But what happens with all these men out of work?

One possibility is that men's unemployment will lead to more men taking on childcare responsibilities at home. Despite the considerable volume of ink spilled over cultural shifts, nothing changes gendered behavior like economic necessity. The last time we saw that happen was the 1990-91 recession - which was driven by declines in industrial production. Those of us who study housework and childcare are used to seeing trend lines that don't show much change in recent years, so the upward spike in this graph for the 1991 recession has drawn some interest since it was first pointed out by Lynne Casper. 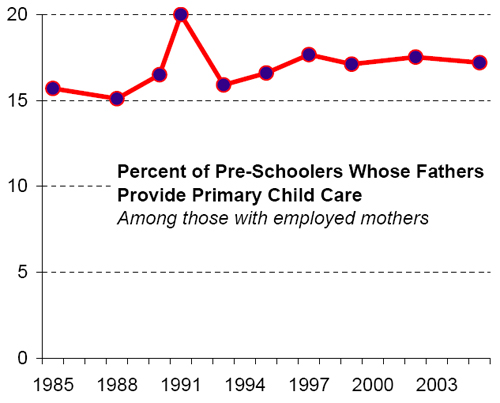 During the 1991 recession, more husbands were the primary childcare providers for their preschool-aged children - and then the trend went back to (just above) normal.

On the other hand, maybe men getting "stuck" with childcare doesn't bode well for marriages. We already know that economic hard times contribute to marital instability and divorce. Study after study after study have found that losing a job increases the likelihood of divorce, with some evidence that husbands' losses matter more.

How much of a difference does it make? It might make a big difference to the odds of divorce for a few million couples, but it would still be difficult to pick up in the national trends. 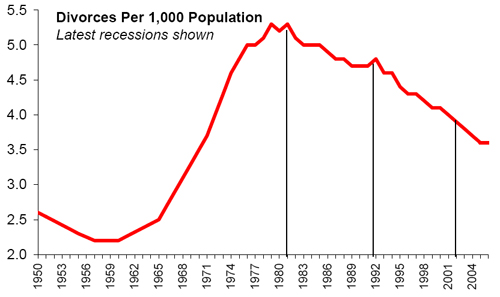 Contrary to popular wisdom, the divorce rate in the United States has been declining since the early 1980s. Not counting the current crisis, there have been three recessions since the peak in divorce rates. The recessions in the early 1980s and 1990s might have contributed to the upward spikes in divorce for those years, but didn't seem to in 2001-02. If the gender pattern holds, and this crisis is more like the earlier ones, this time we might see more divorces, too.

More:
healthy livingdivorceChildcareWomenrecession
Newsletter Sign Up
The essential guide to taking care of your mind and body
Subscribe to HuffPost’s wellness email
Successfully Subscribed!
Wellness delivered to your inbox