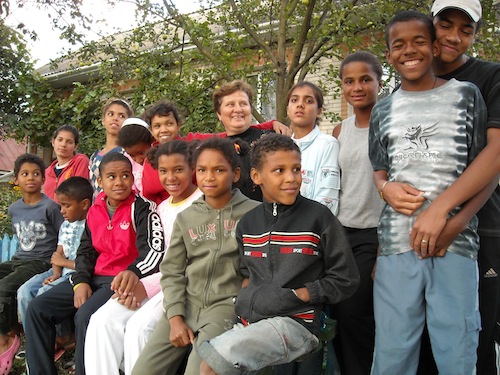 The upcoming documentary by Julia Ivanova, titled Family Portrait in Black and White features a Ukrainian foster mother, Olga, and her brood of 27 foster kids. Ranging in ages between grade schoolers and legal adults, Olga's children are for the most part the beautifully unique result of relationships between African students -- attending the affordable universities of the former Soviet country -- and Ukrainian women. In a national environment that presently leans more on the side of intolerance and bigotry, where neo-Nazi demonstrations can be the found on any given day in Kiev, Olga should be called a heroine.

Yet the beauty of Ivanova's insightful film lies in her cinematic portrayal of the woman behind the mother. Olga turns out to be a flawed, overbearing, opinionated result of the former Soviet regime, who loves by the rules and teaches by the book: her book. In other words, perfectly human.

I caught up with Ivanova about her touching film and she shared her insightful views on the film's imperfect heroine, as well as the future of these biracial children in a world that is increasingly partial to what is standard and un-unique.

Your film tells the story of a woman who is human, not just a heroine. How did you become aware of this particular story? 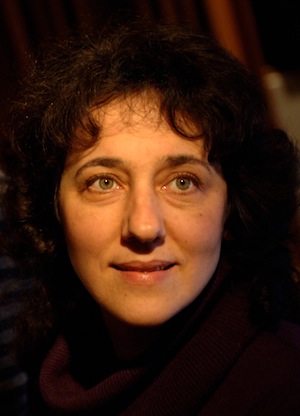 This particular story was very dear to me because for a number of years I wanted to make a film about biracial citizens of Eastern Europe and especially children who were born in Eastern Europe and don't have a second identity other than the identity of the nation they feel they belong to. But the society sees them as different, so I was looking for a story that would allow me to explore this topic in its whole complexity. I was filming in Moscow in 2004 when I saw an article in the local newspaper of this woman in Ukraine with photos. Immediately I thought it was an excellent, excellent story and I got in touch with her a year or two later and then came to meet her.

How did you decide which kids would have a stronger presence in the film?

When I came to this town, Sumy and I went to wait at their house, I was amazed at how open they were and immediately I could sense who was who among the children. It was very clear who is very interesting and who would represent what type of personality. Of course, I would have loved to have had more girls in the film, instead of mostly boys and it also just happened this way, it wasn't my choice. It's just that the boys were more authentic and more relaxed in front of the camera and they had more things to say. I had one girl whom I filmed more but then due to some personal circumstances she asked me to shorten her role in the film.

Do you think that culturally the boys were more able to express who they are?

Absolutely not! (laughs) There is total equality among genders in the former Soviet Union, so I wouldn't say that the girls who are of mixed race feel more victimized. It was just that it happened this way. I tried several of the girls, I tried, but as soon as they found out that I wanted to ask them personally some questions or I would talk with them, they would lose the ability to act naturally and would start to act. And be shy suddenly.

I read in the press notes that the hardest story for you to go back to is Kiril's -- nicknamed "Mr. President" -- because he moved away from Olga. Do you think there can be a happy ending to his story?

Kiril is in the U.S. right now, on a student summer exchange, working. He came for several months to work in a small town two hours from Chicago. Since their lives are continuing they will have lots of developments... In terms of Kiril, I think that as all other children they will carry all their lives what Olga has taught them, good things and bad things. And it will take a lot of time to have a more realistic understanding of what the world around them is, because I think and what I see in the children right now is the mentality where you feel you are an orphan and the whole world owes you because you are an orphan and that, Olga instilled in them. And also that the whole world owes her and nobody understands her and everybody is awful and everyone is not as smart as she is. I can see that it is damaging the ability of the children to feel healthy in their relationship with the outside world when they become older. I can see it in Kiril and I can see it in other children. But at the same time of course they are fighters and they are very strong and this is something that they have to learn.

As imperfect as Olga is, even our most beloved mothers can be flawed. She gives these kids a sense of community, so that they will grow up with others who are like them in a country where they might not otherwise "fit in." She may be imperfect but she is doing something. Personally, do you think it is more important to do something, even if you are not going to be right, rather than sit back and do nothing at all?

I think you phrased it in a very precise way. Exactly, the things that she's doing far outweigh the shortcomings that she has. The fact that she is doing what no one else in the country does I think only for that she deserves to be considered a hero, and some heroes are not perfect, and it's OK. And she gave them the feeling of community which is very important, they have basically no complexes that they are different from others because they grew up with children who are like them, so I think that in the circumstance that she lives in and with the Soviet background that she has, she has done the best job possible for these children. And at that age every child is critical of their parents but I think with age, and once they have their own children, they will really appreciate what she has done for them.

Your brother Boris Ivanov is the producer of the film. What are the pros and cons of working with a family member?

I think the fact that we are a team, and we feel that we are a team, that is the most important thing. The second important thing is that we can disagree and argue about something but the hard feelings will not stay for a long time because we are siblings. So that is very important. Although he is younger, he bosses me around. But he's a producer, so that's his job and he helps me a lot with technical elements and creative ideas and he himself is a very creative person. He did some award-winning films in the past and he's working as a director on different projects, so I think we are a good team.

If you weren't a filmmaker, what would you be?

If I were not be a filmmaker, I would be a social worker who works with children.

Family Portrait in Black and White opens on July 13th in NYC, at the AMC 25 in NYC.

Images courtesy of the filmmakers, used with permission