Recently, I was cleaning my eight-year-old's room and came across troves of material from his policeman phase: heavy-duty handcuffs; badges; the hat; and photos taken with various law enforcement officers. We spent Jack's fifth birthday at the Ward 3 police station here in DC, he in his light blue button-down, navy pants, belt, shoes, hat, badge and all belt-based accessories a policeman would need. The Ward 3 team was very accommodating and took him very seriously, answering his questions with well-masked amusement.

I did not, at that time, think that just eighteen months later, at the tender age of seven, Jack would lead his little brother, Oliver, on a pre-dawn mission to find pinecones nor that they would then be escorted home by two large FBI agents patrolling our neighborhood.

I myself was cared for by two large agents once. They were Emergency Rescue Squad members and came in the early morning hours because I called them. I did not remember calling them -it was an epic night of debauchery during senior year of college; I'd broken up with a guy and was feeling liberated- and when my roommate, clad in an oversized Tigger tee answered the door, she was as surprised as I was when they later entered my room.

"Ma'am, we hear there is an intoxicated female in the house."

My roommate: "Well yes there is. How did you know that?"

"Ma'am, since we came out, we have to make sure she is OK. Please show us her room."

Tigger showed them down the hall, and there I was, in a red, spaghetti-strap, thermal nightgown. I still had on all the jewelry I'd worn out that night, and I'm certain my make-up had seen better days. Certainly I looked like some Dynasty trollop who'd lost a man.

"Ma'am, you called us. You said your stomach was hurting, that you'd had too much to drink and that you were concerned. We need to examine you and make sure you are OK."

"Don't touch me! What kind of a woman do you think I am?"

"Ma'am, we have to or we'll have to call your parents."

I'm not actually sure they could have because I was legally an adult but I was still a dependent, and that really snapped me to attention.

They determined that I was fine and then asked me to sign the release form.

Tigger said, "Do you need me to sign for you?"

And I replied, with ludicrous confidence, "Of course not, I can do it myself!"

Apparently, the result was a loopy, swooshing script that covered the entire page. I know this because when I awoke the next morning, bejeweled and suffering a tremendous Irish flu, I saw the carbon copy I'd signed. At that point I began to feel exceedingly confused.

I toddled gingerly out to the kitchen and saw my roommates looking at me with hilarious expressions: clearly they could not wait to fill me in on all I didn't recall.

The "Nichols calling 911 on herself" story spread like wildfire, and I dare say it upped my esteem in the eyes of many. At the very least, it soon started to make for a great story and continues to do to this day, more than fifteen years later.

When my boys were brought home by the FBI that September morning a few years back, all I could then process was anger, relief, and shock at their attire. Jack had on glow-in-the-dark solar system pajamas, "night vision goggles" crafted from glow-in-the-dark wiki sticks ("because it was still dark outside, Mom.") and a pot-holder loop strapped to his head, and socks on his hands but nothing on his feet. Oliver was sockless and in PJs too but also had on his Pull-Up which seemed to make the whole episode that much more ludicrous. 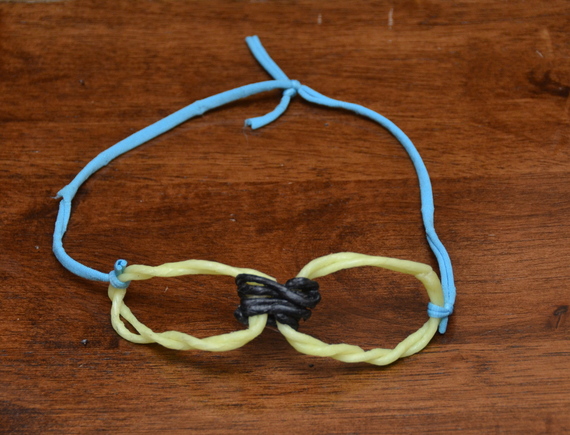 When I asked about the hand-socks, Oliver said, "Well, Jack weally didn't want to get pwicked by the pinecones." Erm, and what about y'alls feet as your traipsed down our back alley and along Mass Ave? No answer there.

We apologized profusely and expressed our unending gratitude to the FBI agents (who were in the neighborhood on regular duty as some government leader lives nearby) before shutting the door, shell-shocked. My husband was still in his boxers for crying out loud. But this, too, today makes a fine story, and I began to wonder if there's something in our blood.

Does your family have tales of amusing run-ins with law enforcement too?