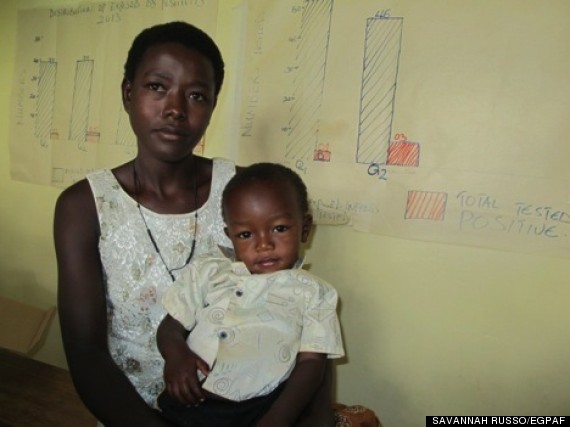 Annet Mbabazi holds her 18-month-old son, Pobruce, who graduated from the PMTCT program at Ruhoko Health Center IV. He is HIV-free.

Annet Mbabazi is living with HIV, but her 18-month-old son, Pobruce, is HIV-free. I met the mother-baby pair at the health center in Ibanda District, in Southwestern Uganda, where Annet participates in a family support group. The program has been crucial to her health and to her son's future.

"When I started... I gained energy to care for my family," said Annet with a smile when asked about the benefits of the program. "Above all, I appreciate the care of my baby, who is HIV-negative today."

The family support group at the Ruhoko Health Center IV leads monthly meetings and provides services to HIV-positive mothers and their HIV-exposed infants -- funded through partnerships with the EGPAF, the U.S. Agency for International Development's (USAID) Strengthening TB and HIV/AIDS Response in the South Western Region of Uganda (STAR-SW Project).

The program takes a holistic approach, providing medical and psychosocial support to HIV-positive mothers while monitoring their HIV-exposed babies. Mothers enroll in medication regimes, participate in support groups with other HIV-positive mothers, and receive counseling and instructions for maintaining their health and reducing risk of infection to their children.

When babies are six weeks old, health workers at the center screen them for HIV with a dried blood spot polymerase chain reaction diagnostic test. The health workers repeat the test when the babies are weaned from breastfeeding, followed by a confirmatory antibody test at 18 months.

On the morning that I met Annet and Pobruce, the toddler had officially graduated to HIV-free status. Annet beamed as she cradled her young son.

Support for Children, Too

"Family support groups help mothers learn from one another," explained Prima Komugisha, a health worker at Ruhoko Health Center IV. "These groups also help with disclosure. For those who still have stigma, it helps them to disclose to partners when they reach the health center. Family support groups also help mothers share stories and experiences."

But support groups are not just for the adults. For Gift, an eight-year-old enrolled in HIV care, the excitement and anticipation of attending her first Ariel Club was evident, even through her shy demeanor. Ariel Clubs are pediatric support groups, named after Elizabeth Glaser's daughter, Ariel. These clubs provide a safe space for HIV-positive children to receive support and create lasting friendships.

As Komugisha explained the Ariel Club to Gift's mother, Juliana, she also explained to me that Gift had been initiated on antiretroviral drugs. Until this point, Gift was unsure about why she was taking the medication. The Ariel Club will provide a safe space, with other children living with HIV, for Gift to learn more about HIV and her medications -- while feeling free to explore and share her emotions and thoughts. She expressed interest in meeting the other children, while smiling as I took silly pictures of her and Betha, her 8-month-old sister. Betha is also enrolled in care and is being monitored to ensure that she remains HIV-negative.

For Annet, Juliana and their children, family support groups have been a proven way to ensure adherence and provide education, support and training for living a positive life.

Savannah Russo is a Global Health Corps Fellow working as the research and documentation officer at EGPAF Uganda.

This article has been supported by the U.S. President's Emergency Plan for AIDS Relief (PEPFAR) through the United States Agency for International Development (USAID) under the terms of funding provided to the Elizabeth Glaser Pediatric Aids Foundation in the implementation of the USAID Strengthening TB and HIV AIDS response in the South Western Region of Uganda (STAR-SW project). The contents are the responsibility of the Elizabeth Glaser Pediatric AIDS Foundation and do not necessarily reflect the views of USAID or the United States government.