I awoke to the following Facebook message from a family member: 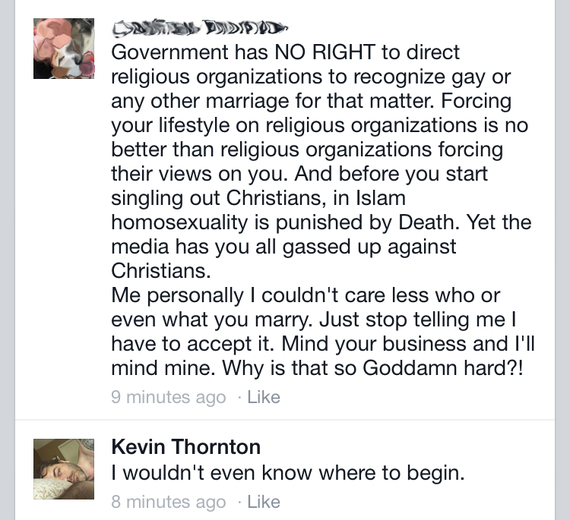 On the brink of a Supreme Court decision, this sort of sentiment is streaming through the feeds of gays nationwide. Why wouldn't I just respond to this family member privately? That's simple: I'm really dramatic. What's not as simple is the reasoning and logic here. Let's take it a sentence at a time.

"Government has NO RIGHT to direct religious organizations to recognize gay or any other marriage for that matter."

Except that it already does. For straight marriages. For interracial marriages. Hopefully soon for gay marriages.

Let's talk about this phrase "forcing your lifestyle." I hear it a lot. It often accompanies the words "shoved in my face." Such violent terminology. What are you afraid of? Get your dollars ready, here comes a mandatory, greasy lap dance from yours truly. You might be planning a quiet evening with your family tonight, but too bad. My boyfriend and I can't wait to make out in your living room. Can you guys pick up some poppers?

Let me suggest, while Christianity certainly has a long and dark history of forcing its views on others, we gays are just asking for equal and fair treatment. Consider that it might feel like a face-shoving only because it's somewhat new. You'll get used to it.

"And before you start singling out Christians, in Islam homosexuality is punished by death."

I know. It's terrifying and abhorrent to see ISIS throwing those poor men off rooftops. Did you see where some men had been tricked into thinking they were going on a secret date, only to be stoned to death? Can you imagine if that happened here? To me? Rips my heart out.

Wait. You didn't mean that in a "just be thankful you aren't being thrown off a roof" sort of way, did you? Not only would that be a cruel and insulting stance to take, it's complete bottomfeeder mentality. It's settling for simply not being as terrible as the other guy, rather than rising to excellence. America thinks of itself a beacon of freedom. On the cutting edge of liberty. (Oh, except Ireland beat us to it this time.)

"...the media has you all gassed up against Christians."

I'll be honest. This one gets my gay goat. Not once have we spoken as adults. Yet somehow you are assuming my opinions are flippant, that the "media" has tricked my gullible self into a vapid stance. Let me catch you up on where I've been since we last saw each other in, like, 1989. In high school I was the church golden boy. Our small-town religious community thought of me as a kid with a promising future for Jesus. The next Billy Graham perhaps. So when puberty hit and the first waves of sexuality came to be, it was troublesome. I tried to deny and suppress to no avail. I was gay. And in that community, there's nothing worse. By the time I was attending Exodus Ministries "pray away the gay" meetings, it had all escalated into full on emotional torture. Looking back, it was absolutely mental abuse. I digress.

All this to say, my thoughts and opinions are hard-won. I suffered for them. I didn't flip a coin. A talking head on a liberal news channel isn't thinking for me. I'm actually living this experience. I find it so curious that many heterosexuals have obviously theorized about the gay experience without listening to those who are actually in it.

"Me personally I couldn't care less who or even what you marry."

When you imply that you don't care "who or what" I marry, it's degrading. It hints at the idea of two men marrying is a step toward a man marrying a tree or a dog. I'll choose a "who" thank you. His name is Del Ray. He's really wonderful and I hope that it will be legal for us to marry in Tennessee someday. If you can find it within yourself to care even just a little about who or what I marry, I'll send you an invitation. (And I fully expect one of the more expensive registered items to make up for all this nonsense.)

"Just stop telling me I have to accept it. Mind your business and I'll mind mine. Why is that so Goddamn hard?"

You personally don't have to accept it, I suppose. It's America after all. Think, believe and say whatever you wish. However, telling a community who was previously without a voice to shut up is a bit suspicious. That's why it's so goddamned hard.