(This article appeared previously on GrownChildren.net.)

This April we spent part of a week in London with my daughter and her family. She flew over from Berlin, where she was living and working and we crossed the Atlantic.

It was Spring Break. Our mini-vacation had its high points — we all loved Wicked and the Egyptian exhibit at the British Museum. There were also lows, when all five of us — daughter, son-in-law, grandson and the two of us — were miserable about where we were or why we had decided to be there.

That's how it goes with multigenerational vacations: You have your big smiles, belly laughs and joy-filled photo ops. Then you do not.

Good Times Together — And Bad

Next month we are heading to Vermont. This time we will be vacationing with both of our children and their families which puts us in the 15 percent of vacationing boomers who are traveling with their grown children, according to AARP.

It will be a reunion of sorts — our daughter is coming back from Berlin after a year of living there; my son and his family are seeing their sis and cousins after a year's hiatus. We've done the Vermont-togetherness thing before, and we have learned — the hard way — where the little worms lie in our happiness apple.

Whether a family is traveling around (as we were in London) or settling into a resort area (as we will be in Vermont), there are ways to avoid some of the miseries that can accompany a multigenerational vacation.

Here are my top six rules for avoiding meltdown moments:

1. Be prepared. Make a list of things to do, in rainy weather and when it's fair. Sitting around with no plan can bring on the crankies.

A friend who rents a house in Italy every summer gives her visiting sons and their families a calendar of events she's planned for their week with her. They don't have to opt in, but the daily list gives everyone a sense of purpose and direction.

2. Be independent. There is such a thing as too much togetherness. It helps to go your separate ways for at least part of a day. The hikers can climb the mountain trail; the swimmers can head for the lake. The Egyptologist can take in the museum; the musicians can go to a concert.

Sharing tales of your little adventure when you get back together injects positive energy into family dynamics.

3. Be generous. Pay for as much space as you can afford — whether it's hotel rooms, tents, condos or the number of bedrooms in a rented house. There's nothing more wearing on everyone's nerves than being crowded in on each other. Which leads to Rule No. 4...

4. Be absent. Take time for down time: to rest, to read, to put your feet up. Everyone needs “quiet time” — not just the toddlers.

Find a quiet place and park yourself there. It may be especially soothing to remove yourself from the multigenerational family scene in the late afternoon, when a small child's day tends to unravel.

You know you're supposed to leave the parenting to the parents; if you're not there, you'll be sure to.

5. Be flexible. Don't nag because your kids (or their kids) have their eyes, ears and thumbs busy, busy, busy with iPads, iPods, iPhones or Gameboys. It's their vacation, too.

It may be annoying that they're otherwise preoccupied, but you can always take an interest in what they're doing. Fruit Lines, anyone?

6. Be realistic. There's such a thing as being too ambitious — whether it's the number of sights you want to see in a given day, the dinners you want to cook for everyone or the inter-family tennis tournament you want to run.

Don't make it complicated. Don't cram everything in. Yes, Rule No. 1 (a list of things to do) is important. But too much is tiring, and tired people are not at their socializing best.

Penelope Lemov is the founder and writer-in-chief of the blog Parenting Grown Children. 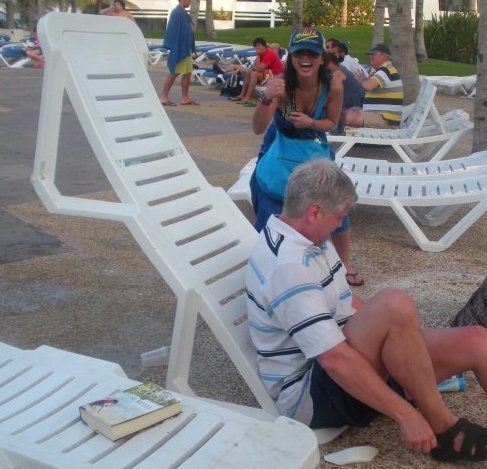