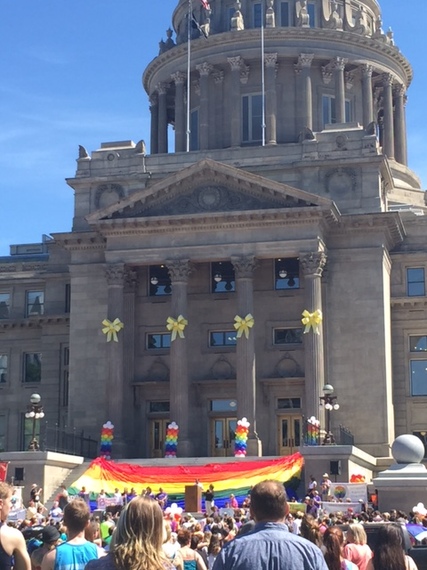 Our family is complicated. Like many other Americans, my second husband Ed and I are both divorced from our first spouses. Ed has no children of his own and thinks that "our" four (plus our very lively cat) are more than enough. My children's father has also remarried, so my children have step-siblings and a half-sibling to add to their postmodern family tree. We are all white and middle class, and we live in one of the most politically conservative and the least racially diverse states in the nation: Idaho.

One of the biggest challenges of raising children after a divorce is navigating the space between very different sets of parental values. My younger two children are being raised in a faith tradition that historically discriminated against blacks and that continues to prescribe rigid gender roles. I support their father's decision to take them to the Mormon church because I don't think religion is worth fighting about, and because my own Latter-day Saint parents managed to raise children who were respectful and tolerant of others. But I cannot remain silent about my values, even when they conflict with what my children learn in church.

In light of a landmark week for gay rights and racial discrimination, I asked my children what they knew about two very different flags. "A flag is a symbol," my 11-year-old told me. "It represents a country or an organization." As we talked about the Confederate flag, I asked them what it symbolized. "Isn't it the Civil War or something?" my 10-year-old daughter said. I explained that for many people, the flag was associated with slavery and oppression.

"But didn't Dr. Martin Luther King fix all that?" my daughter said. "I thought he made it so that black people and white people were equal."

White people say things like this all the time. They say, "Oh, we have a black president now, so we can't be a racist country," or "Oh, we have affirmative action policies, so white males are actually the victims of discrimination" (Yes, I have actually heard this phrase come out of more than one white man's mouth).

If there's one thing we've learned over and over again these past few years, from the Trayvon Martin shooting to Ferguson to the tragedy in Charleston, it's that Americans are decidedly not "over" racial discrimination. As a parent of white children, it's my duty to teach them to use their privilege to be allies to those who do not share that privilege. My children were shocked as I explained to them how black mothers and fathers were afraid for their teenage sons, because they could actually be shot and killed, just for being teenagers. "That's not fair," my son said. "That's not right." Exactly.

Then we talked about another flag: the rainbow flag that symbolizes the LGBT pride movement. The Mormon church, along with many other conservative Christian churches, has been and continues to be a vocal opponent of gay marriage. I actually do feel some empathy for people who fear that their deeply held religious convictions are being challenged by last week's Supreme Court ruling supporting gay marriage. But in listening to some of my conservative Christian friends, I think there's a basic misunderstanding of what the ruling really means. No church is going to have to marry gay people. The decision does not at all impact their religious freedom, any more than the long overdue imminent removal of the Confederate flag from South Carolina's state capitol impacts individual freedom of speech.

I told my children that I think the First Amendment is one of the things that makes America a great country. Every person who wants to display the Confederate flag on his or her front lawn or white Chevy pickup truck should unequivocally have the right to do so. But any person who wants to fly the rainbow flag should and must have that same right. The government should not sanction discrimination of any kind. And as a parent, I have the power to teach my children tolerance and respect for differences and to encourage them to speak up for those who are oppressed.

That's one thing I have learned from my conservative Christian friends: We shouldn't be afraid to share our values. In the end, no matter what your family looks like -- black, white, gay, straight, or some combination of all of these -- the love you share is what matters. Love wins.

More:
divorceParentsfamily valueslgbtconfederate flag
Newsletter Sign Up
Raise the kind of person you'd like to know
Subscribe to our parenting newsletter.
Successfully Subscribed!
Realness delivered to your inbox