You can't even make it out of the house without a double cappuccino, and you can't survive that two o'clock meeting without your trusty espresso shot. Oh, and sure, you've read the conflicting evidence about the health benefits of your coffee consumption, and the possible health risks of overindulging... but you can't afford to waste time yawning your way through life, right?

But if you suspect that you're going overboard with your coffee addiction, you're certainly not alone. In fact, some of the most successful and acclaimed human beings to ever walk the planet were totally, sometimes painfully, nuts for coffee. Just ask these guys: 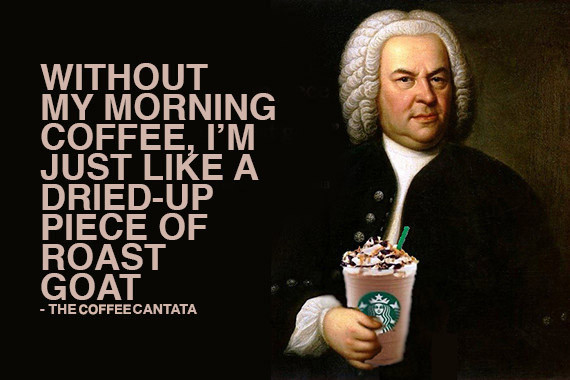 The famed Baroque composer was also a notable coffee fiend. Though he's not well regarded for his humor, he turned an amusing poem by his frequent collaborator, Picander, into The Coffee Cantata in 1732. The cantata mocked public outcry about the rise of the Vienna coffeehouse scene. At the time, coffee was regarded as a dangerous societal "vice." 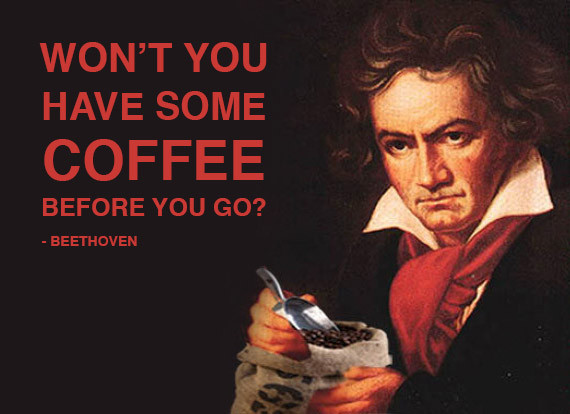 The notoriously temperamental Beethoven once asked the above question wryly after frightening away an unwelcome companion. The famed composer was obsessive about his coffee, and would count by hand 60 beans per cup, according to his biographer.

3. Benjamin Franklin hung out at coffee shops before it was cliche. 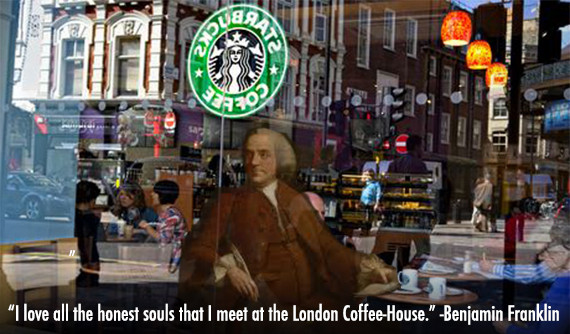 While living in London, Franklin lived the sweet life of the coffee shop freelancer, where he would hold political meetings, play chess and just hang out listening to good conversations. He even instructed his sister to send his mail to his favorite London coffee shop. Ever the industrious businessman, Franklin sold his own coffee beans, and he advised never embarking on a boat travel without one's own coffee provisions, as the captain might run out. 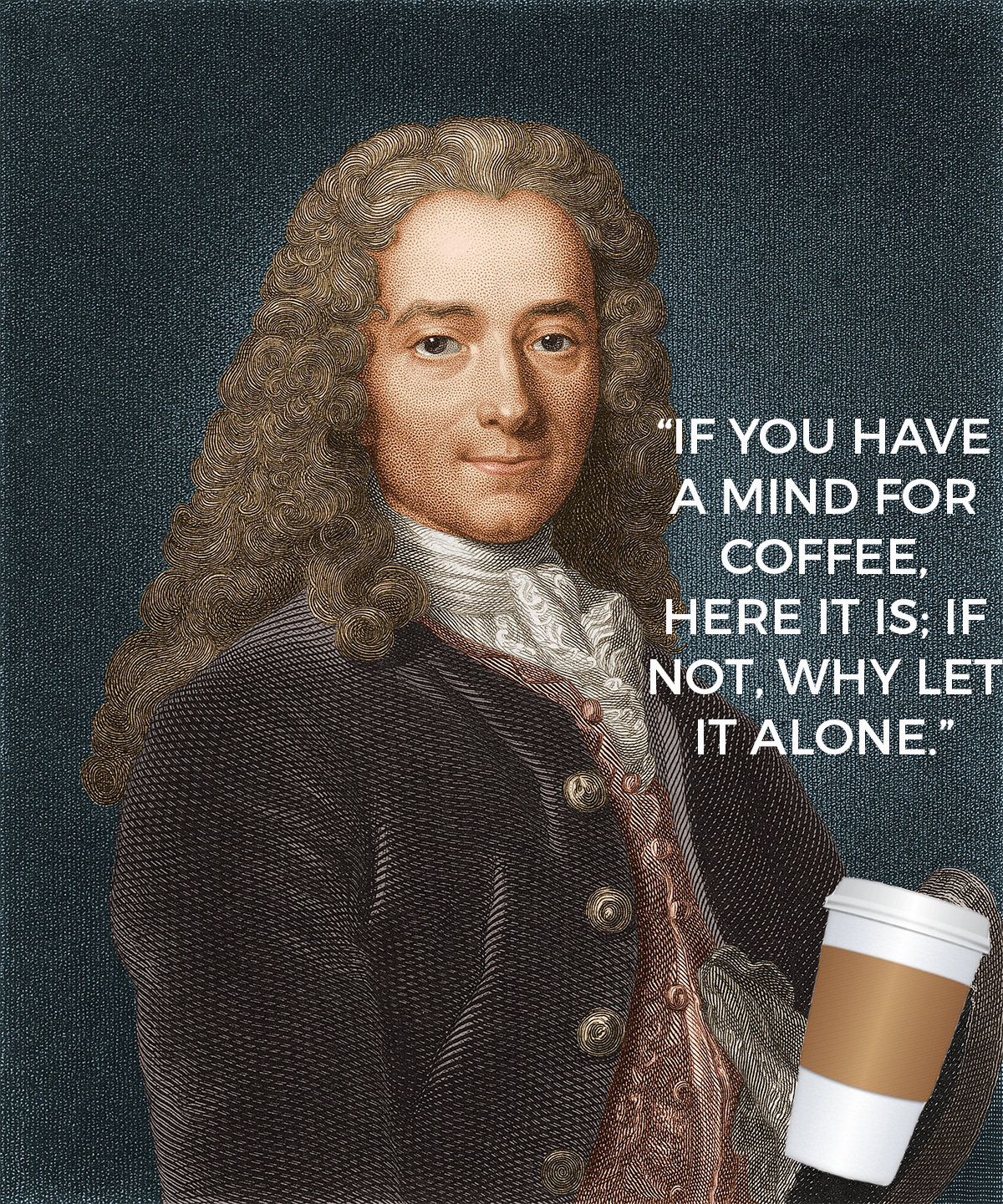 Voltaire, the famous satirist who wrote "Candide," is perhaps one of the most avid coffee addicts in history. He reportedly consumed somewhere between 40 and 50 cups of joe a day, apparently of a chocolate-coffee mixture. He lived into his eighties, though his doctor warned him that his beloved coffee would kill him.

5. Søren Kierkegaard took his coffee with approximately 30 sugar cubes, give or take a giant scoop. 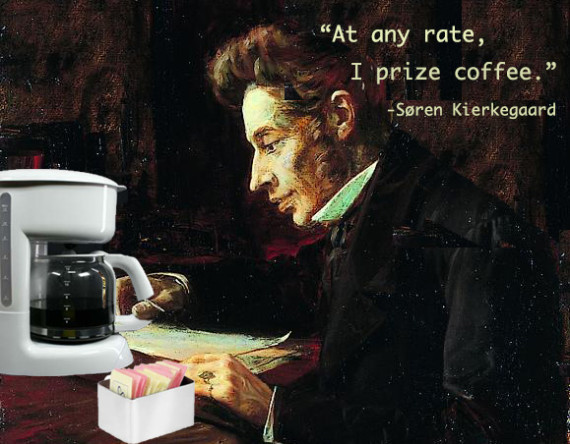 Danish philosopher Søren Kierkegaard was quite particular about his coffee preparations, piling a mountain of sugar into his cup, then pouring black coffee in to dissolve it. He also had 50 different coffee cups, and he would ask his secretary to select one, and give a valid philosophical reason for his choice. The above quote is from his personal writings.

6. Teddy Roosevelt drank a gallon of coffee a day. 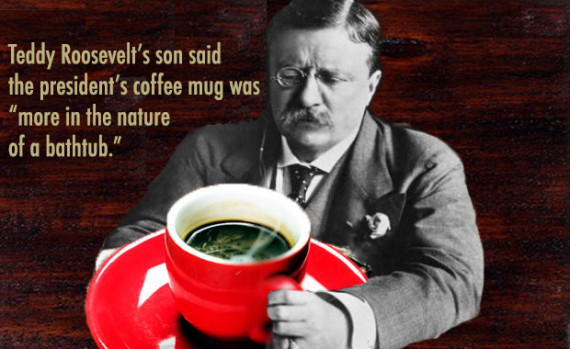 The 26th U.S. president would typically add five to seven lumps of sugar to the drink, though he eventually switched to saccharine.

7. L. Frank Baum had four or five cups of coffee with cream and sugar each morning. 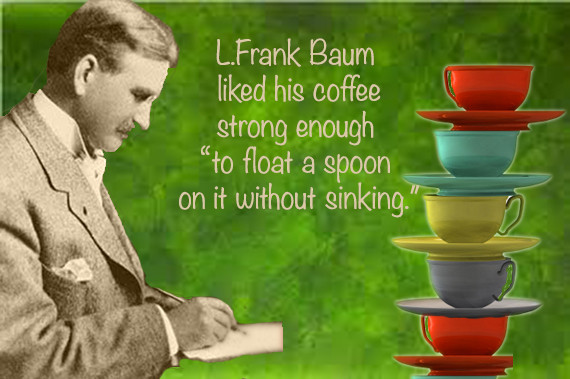 The beloved writer and creator of the Wizard of Oz series relied on his morning joe to get his creativity flowing. He'd drink with breakfast upon rising at 8 a.m.

8. Margaret Atwood has her own coffee line. 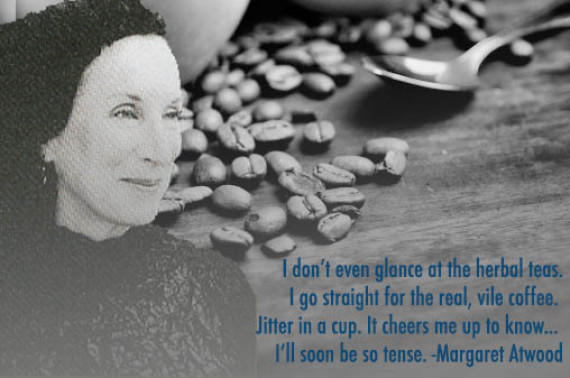 9. David Lynch has anywhere from four to seven cups of coffee a day -- with plenty of sugar. 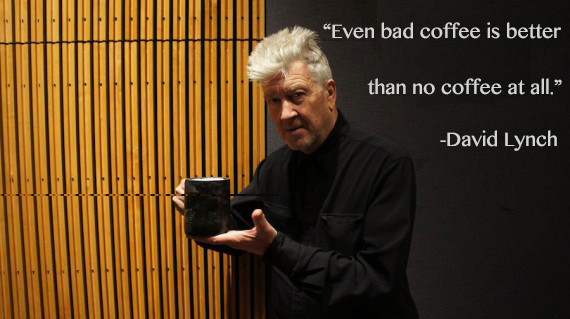 Noted coffee aficionado David Lynch has famously featured the beverage in his films and on his TV show, Twin Peaks. He even launched his own David Lynch Signature Organic line of organic coffee. Lynch chronicled his coffee obsession in a Huffington Post blog.

CORRECTION: A previous version of this article misattributed a quote from Bernard Le Bovier de Fontanelle to Voltaire. It has been replaced.

5 Ways to Drink Coffee Around the World