Strauss-Kahn. Schwarzenegger. Edwards. Weiner. It's been a helluva month for men behaving badly. Am I the only one who sees this as a good thing?

Has the tradition of men having it their way -- with women bearing the consequences -- hit a speed bump?

Historically, women who have been victimized by men -- whether by a sexually harassing boss or a philandering husband -- were trained to hit the mute button.

And it's worked. But, of course, men have always had a litany of "universal truths" to back up their behavior that have been passed down from generation to generation: "Men have their needs." Or, "For men, it's just a physical thing." Or my all-time favorite, "Boys will be boys."

Well, not so fast, boys.

The most potent images from this, the ugly month of May, speak with certitude about how quickly those age-honored traditions are unraveling:

Strauss-Kahn doing the perp walk in handcuffs. Weiner crying at the mic. And not a single wife standing silently at her cad's side, her face frozen in shame. (Okay, maybe Mme. Strauss-Kahn did -- but they're French.)

This time, the wives were silent, alright -- silent as in gone.

As those of us who fought the battles of the feminist movement in the early 70s know, change doesn't happen in giant leaps, but, rather, in smaller, significant steps. That's why this string of salacious spring scandals has filled me with optimism -- because, in each case, women have drawn a new line in the sand.

Maria Shriver did not stand by her man when he admitted to fathering a child with the family's housekeeper -- but, instead, packed up, moved into a hotel, and is now reportedly filing for divorce.

John Edwards may have decided to stand firm and fight his indictment for using campaign funds to hide his paramour and love child, but he's become a national punchline, thanks in large part to columnists like Gail Collins and Maureen Dowd, who've spared few words in denouncing the former senator as a sleaze.

Anthony Weiner may claim that his wife of 11 months is standing by him, but I'd say he's in much deeper manure with those other women in his life -- namely, colleagues Rep. Nancy Pelosi of California and Rep. Allyson Schwartz of Pennsylvania, who are leading the charge in calling for an investigation into Weinergate, at best, or expelling Weiner from the House of Representatives altogether.

And the coast-to-coast mantra has become: "Boys may be boys, but it's time for men to start acting like men."

But of all the drama in this explosive month of cheating hearts and Tweeting parts, the person who has given me the most hope is the 32-year-old chambermaid from New York's Sofitel Hotel, who emerged from her brutal attempted rape by the head of the International Monetary Fund, not by slinking away in shamed silence, fearing that her word could never match that of someone so powerful, but instead by going directly to the authorities and busting the offender.

The bravery that took cannot be overstated. Here is a woman from Guinea who'd been granted asylum in the United States and lives quietly in New York, raising her 15-year-old daughter. Her annual salary is probably around $20,000, which, according to the National Bureau of Labor Statistics, is what a woman makes for spending long days cleaning bathrooms, changing sheets and mopping up after strangers.

That's less than 10 dollars an hour, and she needs every cent to raise a kid in New York. But she put everything on the line to stand up for herself and her right to work with dignity. With the courage of a Rosa Parks, she refused to submit to -- and rebelled against -- a long-entrenched system. In her case, that system is one that not only expects chambermaids to tolerate the creepy sexual advances of male hotel guests, but in some instances, even assigns the "new girl" to clean the rooms of those more troublesome guests (like the men who "accidentally" let their bathrobes fall open when the maid is in the room). Oh, the fun the boys have had.

Not this time, said the chambermaid. And if you doubt for a moment that her voice was raised on behalf of women everywhere, take a look at the photos of the union hotel workers -- all women -- protesting outside the Manhattan Criminal Court last week, as Strauss-Kahn and his wife made their exit following his arraignment hearing. How striking and poignant and powerful, this army of women in their familiar grey uniforms with fists raised, the fury of helplessness and invisibility at last unleashed.

These women did not just blow a whistle. They sounded a siren that has inspired women worldwide. And it will empower every maid who ever hears the lock snap on a hotel room door.

Yep, this is a good time. We are seeing the end of a tradition and the beginning of a revolution.

And these are the front lines... 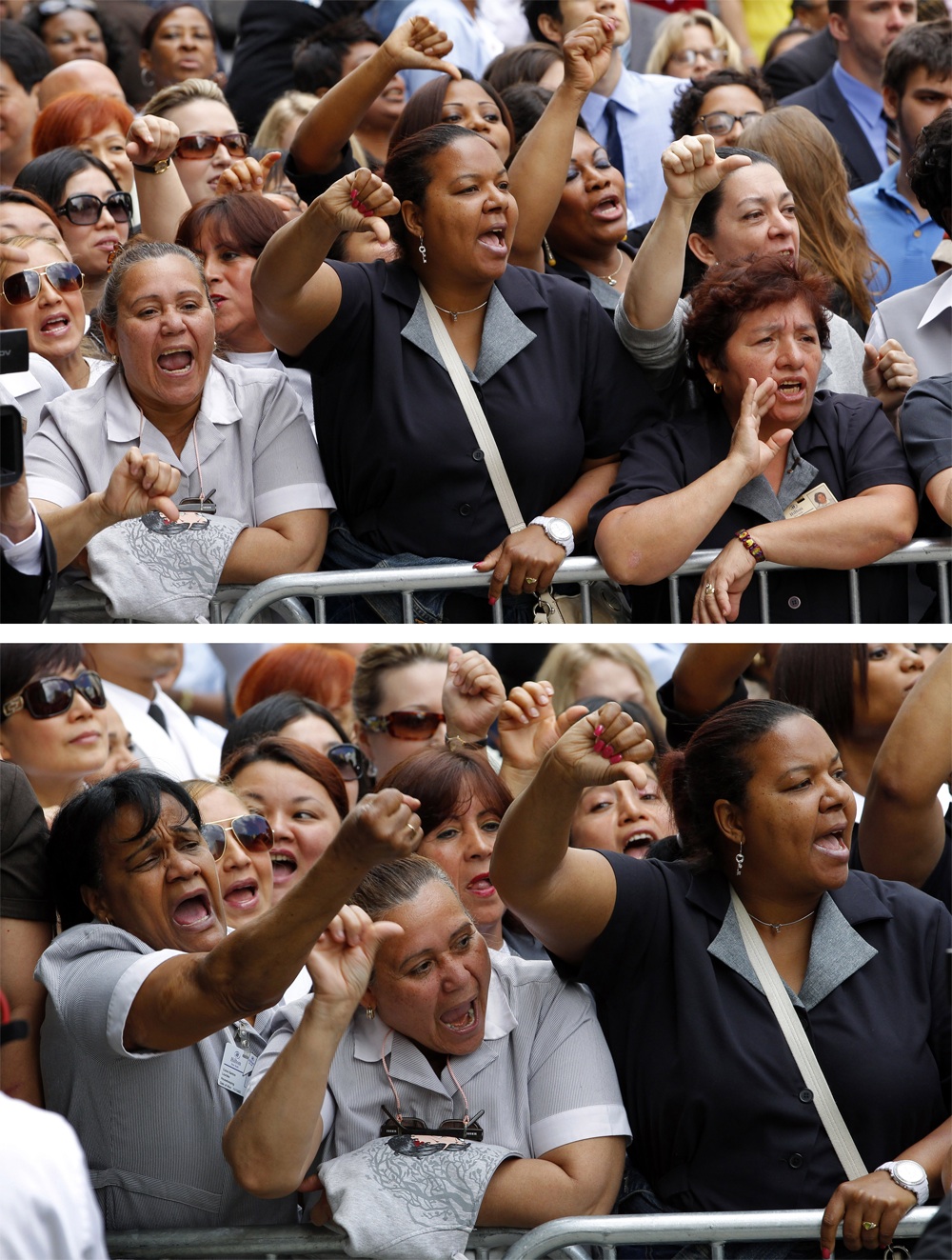