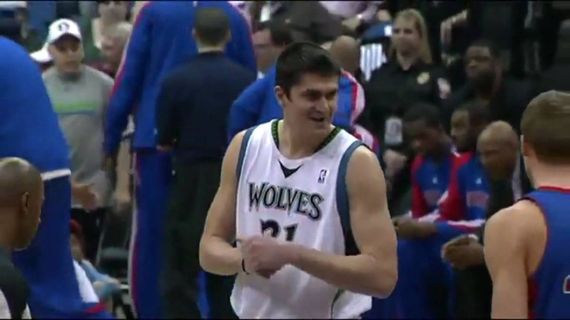 Darko Miličić is perhaps most famous for being drafted, in 2003, into the NBA ahead of players who would become superstars, like Dwyane Wade, Chris Bosh, and Carmelo Anthony, and then becoming...very much not a superstar.

After a few years playing just a few minutes for a few different teams, Miličić was waived by his final team (the Boston Celtics) and retired from professional basketball. His career post-NBA has been fascinating, to say the least; he protested in The Hague in support of releasing a Serbian war criminal; he began a short-lived career as a professional kickboxer, the first match of which came to a gruesome, bloody end; and he showed up in a music video demonstrating his ability to drink a bottle of beer with no hands.

Plus: Denver Broncos' Von Miller Dreams of Being a Chicken Farmer

There's not much information that we can glean from the article, and we can't for the life of us figure out how to contact the man, but here's what we know--or at least what Google Translate tells us: He has apparently retired to a farm near Novi Sad, Serbia's second-largest city, with his wife and two children. What's he growing on this farm, you might ask?

Plus: These 7 Professional Athletes are Also Farmers

"I'm in the fruit," he told BLIC, according to Google Translate. "I took the land and nurture cherry, apple and plum."

Wondering about Serbian fruit output? Here's a quote from a report from the Serbia Investment and Export Promotion Agency:

Plus: 7 Insane Things Farmers Have Accidentally Found In Fields

Serbia has ideal climatic conditions for the growing of fruit. The country's territory is rich in microclimates that are perfectly suited for organic fruit production making the development of this sector extremely promising. Its soil is still one of the cleanest in Europe, most of the fruit is grown in perfect conditions, hand picked and carefully stored and packaged. Serbian fruit cultivation, which places and emphasis on quality and flavor, contrasts with the large industrialized farms of the West. In fact, most fruit in Serbia is still grown on small, family owned farms.

More from Modern Farmer:
Still Life with Mass Hysteria: Are GMOs Really That Bad?
Never Buy a Teacup Pig
Why Does Everyone Hate Monsanto?
A Flower-Farming Renaissance: America's Slow Flower Movement
How to Incubate Chicken Eggs