Fan Expo Canada is over for another year, so if you were planning on donning that Captain America costume and sauntering over to the Metro Toronto Convention Centre, you're too late. It's time to put those star-spangled underpants and that winged cowl back in the closet until next year. Lucky for you, we've got you covered. Just because you couldn't be there in person, doesn't mean we couldn't bring you all the star-studded highlights from the final day.

John Barrowman Doesn't Give A S--t The noon panel kicked off with Britain's favourite time-traveling renegade -- no, not Dr. Who, but the leader of "Torchwood" and the first openly gay character in "Dr. Who" history -- Captain Jack Harkness. That's right, John Barrowman, who shares his TV character's sexual orientation, brought his love of sci-fi and musical theatre to a thrilled Fan Expo audience. Being an openly gay actor hasn't been easy, but Barrowman has no fear.

"I don't give a s--t what other people think, and if you're allowing someone to dictate the fear in yourself so you can't be who you are, then you should really grow a set of cojones and speak up," said Barrowman.

"I've had producers say to me -- in fact, this one producer was gay themselves -- and they said, 'You shouldn't talk about your partner, you shouldn't talk about this, you shouldn't do that, you shouldn't be who you are and I went back to my partner and said, 'What do I do?' and he said, 'What do you want to do?' I said, 'I'm not going to ask you to hide and go to a party with a girl on my arm just because some people aren't comfortable with it.' That's not my problem and I basically said, 'No, I'm not going to do it.' They weren't happy with that, but you know what? That's their bad and if they're going to cut me out or put me out of a show because of that? I don't care."

Sometimes such openness can lead to hilariously awkward situations, like when a Toronto cab driver, with what Barrowman called a Minnesota accent, recognized him from "Torchwood": "Oh, 'Torchwood.' Didn't they cancel that show because that guy was gay?" asked the cab driver, with no idea what he was walking into.

"Actually, they just don't know whether the show is coming back and they didn't cancel the show because that guy was gay because I'm that guy," said Barrowman. After that, the colour fell from the taxi driver's face and all he could muster was a long string of "Ohs."

"It goes without saying, he didn't get a tip," confirmed Barrowman.

Candid Christopher Lloyd Speaking of "Taxi," Christopher Lloyd also held court, running through many of the classic lines from "Back to the Future" -- from "Great Scott!" to "Roads ... where we're going, we don't need roads." He also took particular relish in the fact that he scared an entire generation of kids with Judge Doom in "Who Framed Roger Rabbit."

"Yes! I feel good about it!" he exclaimed. "A lot of people at the signings here have come up and said how when they were children and they saw that movie, it horrified them. They were so scared of the character and that's OK. I love to do that. I don't want anybody to be damaged for life, but that's fun."

Even his co-stars aren't immune from being afraid of him. Just ask Hank Johnston, his little co-star who played Gunther Beckman in "Dennis the Menace." "I played a villainous guy in that," said Lloyd. "Which I relished. I loved doing it. There's this scene where I'm going through this alley and I'm passing by these rich homes and I'm kind of scouting out what home I'm going to burglarize next. There's a fence in the alley and on the other side of the fence, there's a boy getting ready to eat an apple. It was just a kid that they got -- five, maybe six years-old -- and I reach for my knife, take the apple, eat it and walk away. That boy, for the rest of the shoot, whether I was in costume or out of costume, he'd see me and he could not come near me. He'd be with his mom and he'd hide behind her. So, I hope that, wherever he is, he's OK."

Billy West, Voice Legend The last panel of the day Fan Expo 2012 featured voice acting legend Billy West. The 62-year-old divulged some of the inspirations behind his most recognizable voices. For example, "Futurama"'s military captain Zapp Brannigan was based on a compilation of what West calls "the big dumb announcers" that he grew up listening to. 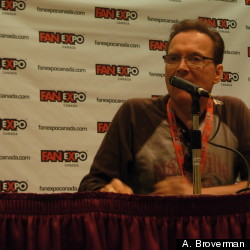 "These guys were hanging onto every syllable, milking every word like a gospel singer, with five syllables for one word. They were just so afraid to leave dead air. Take a breath, for God's sake. It's like the Hamburger Helper of words. They loved far and away, above anything else in their life, the sound of their own voice. But, those guys started getting phased out for people who sounded like real human beings -- somebody you could actually have a talk with and not feel like you're in the middle of the 11 o'clock news."

It turns out that dopey Stimpy from "Ren and Stimpy" is just a sped-up version of Larry Fine from "The Three Stooges," said West. "Everybody could do Moe and everybody could do Curly, but nobody could do Larry and I was blown away by the little he did, so I auditioned as a sped-up Larry."

Ren comes from a much darker place: "He's a little bit of Peter Lorre, but then he was south of the border because he's a chihuahua. Sometimes he had a Slavic accent and sometimes he had a Mexican accent -- I didn't care. Kirk Douglas was also in there from the movie "Crime Story," where he hates lawbreakers because he can't do to them what he really wants to do. One day, he just broke down in the office and they say, 'What's the matter?' and he says, 'I hate CREE-MINALS!"

West also claims that he was a nerd. "I hate the fact that it's cool to be a nerd now, it wasn't 50 years ago. Trying to explain comic books was like trying to explain the desert to a polar bear. But now, even the jocks want to be nerds."

Fan Expo ran from August 23-26 in Toronto at the Metro Toronto Convention Centre. 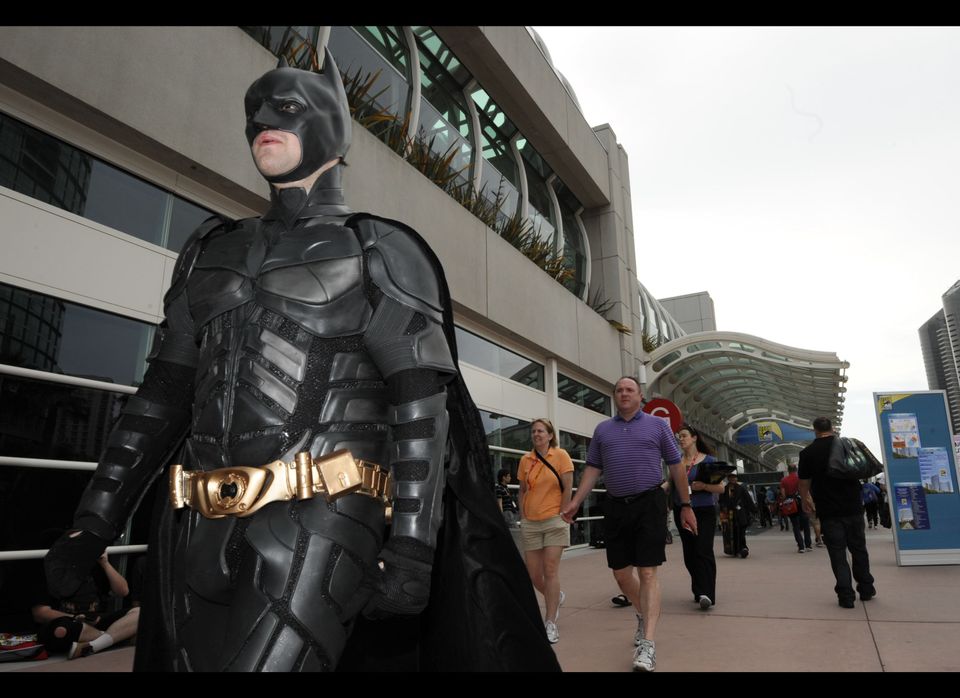