Mix together a hearty helping of the Tour de France, a few dashes of NASCAR and a pinch of roller derby, and you've got the World Cycling League, a new fan-friendly approach to indoor bike racing. The debut is next weekend in Los Angeles and will soon fill other major cities' underused indoor velodromes with fast-paced action and enthusiastic fans.

The World Cycling League will premiere at the Velo Center in Carson, California on March 18 and 19. The TeamTrak format aims to make bicycle racing an exciting, easy-to-understand and very accessible sport, complete with hometown teams that fans can unite behind. 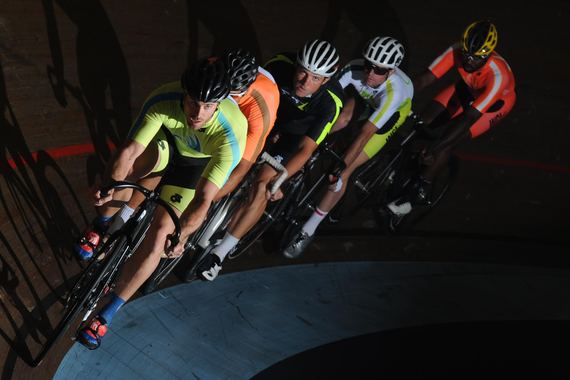 The time is right to popularize bicycle racing. These days, bike ridership is surging, with bike-to-work days, greatly improved bike lanes, and group rides such as Critical Mass attracting thousands of participants. Like a generation of Americans that grew up on AYSO and now watches the World Cup as rapt as it does the World Series, this growing crowd of bike riders may be ready to cheer on serious cyclists competing at a higher level.

Bicycle racing isn't new -- as long as there have been pedals, there have been races -- but the idea of building races around fans' interest is. Dave Chauner, a two-time Olympic track cyclist who co-founded WCL and is its CEO, said everything about the league's races, rules and events was devised with an eye toward making bicycle racing "fan friendly."

That includes creating hometown teams that fans can root for season after season. It stands to reason, since nearly every US city has a hometown team to root for, whether it's football, hockey, baseball, basketball, soccer -- or all of the above. WCL teams will be seven-person, mixed-gender squads whose roster will change season to season, like an NFL or NBA team's.

For next week's inaugural event in LA, there are six teams, with names worthy of souvenir shirts and caps: Colorado Cyclones, Mexico Heat, and Pennsylvania Lightning, among others. The WCL's vision is to grow over the next three years into an international league with a dozen teams.

The "stadiums" for a league that big, or even considerably larger, already exist. Around the world, there are about 80 indoor velodromes, scattered around 32 countries. For events, they'll be filled with video screens, music and other features that help dial up the fun for fans.

Easy to understand scoring is another key feature of TeamTrak racing, according to Chauner. It's part of the attempt to make bicycle racing feel less like something dominated by insiders, intimidating to the casual fan or the families looking for some action and excitement to enjoy together. At a race event, the six teams will ride in 12 different races, from short sprints to a 12,000-meter endurance race. Points from each race add up to a team's final score.

And pricing is part of the fan-friendly approach, too. Tickets for the March 18 and 19 series of races start at $10 and top out at $35, making for a reasonably priced family outing or date night.

The league is working on branding and promotions, all part of the following the lead of wildly successful NASCAR and other sports.

With all these parts in motion, indoor bicycle races may be ready to kick into high gear.