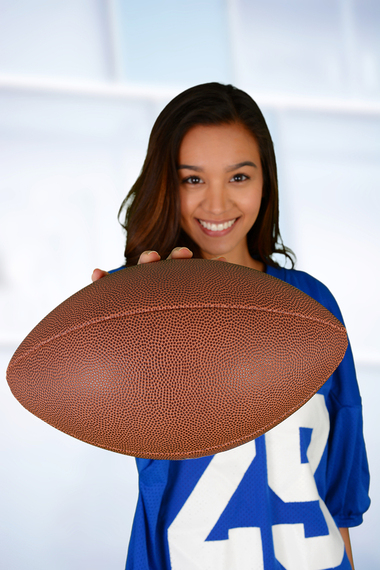 Should I take up golf?
On a recent flight, I was rereading Sheryl Sandberg's Lean In, when I glanced at the woman next to me and she was reading ESPN's Fantasy Football Preview. We shared a laugh that she was reading about football and I was reading about women's leadership advancement. For the next hour, we talked Fantasy Football. How did her team do last year? What was her draft strategy? What were her favorite research sites? Did I have any advice?

Personally, I am in three different leagues (one Championship and two Playoff berths), and playing fantasy football is one of my most guilty pleasures. I am a born and raised a Packers fan, An ideal Sunday is to sit for 12 hours and watch 4 to 6 games at once, (thank you DIRECTV). Like many men, I love football. So does my wife. And so do many women.

The number of women playing fantasy football in the United States and Canada more than doubled since 2007, growing to 8.3 million in 2014, according to the Fantasy Sports Trade Association. Women now account for more than 20% of all fantasy football participants.

According to the National Football League, women now make up nearly half the league's fan base; 375,000 women attend NFL games each weekend. Earlier this year the NFL conducted its first ever NFL Women's Summit, an initiative to advance women in sports. This is also the first year the NFL will have a woman on its on-field officiating crew.

In 2015, 46% of the 114 million Super Bowl viewers were women -- higher than this year's Oscars, Grammys and Emmys combined.

I attend and speak at numerous women's leadership events and talk to a lot of women. A common question I am asked is "Should I take up golf so I can network on the golf course?" My response is always the same; take up golf if you like it but it is a hard game to learn and master. Additionally, you will need to invest a lot of money. And if you've never played you will need to practice a minimum of 8 to 12 hours a week just to be a decent, not good golfer.

Rather than take up golf, I suggest that you join a Fantasy Football League.

Fantasy Football, Women, and Networking
You don't need to understand football (or even enjoy watching the game to participate in Fantasy Football --you can just jump in and participate to enjoy the benefits of participating. Most leagues are free and it's easy to start.

Fantasy Football has become a leading social networking forum for women and will give you something to discuss with the men (and women) in your office for the next 5 months. Not only will you learn pointers about the game -- you'll have plenty to talk about at your office and on game day (And yes, before I get more hate mail, I do coach and engage men in my training sessions to talk about other things than sports at work to be more inclusive of those at work who aren't into sports).

Let's be candid, everyone talks about football. Football is no longer just a sport, it is a current event every Monday and as a business leader you need to be aware what went on in your city--and perhaps across the country. No, you don't have to watch 12 hours of games every Sunday but if you can come in and complain that your Fantasy team lost because the Dallas Cowboys kicker missed a chip-shot field goal in the last 13 seconds of the game your co-workers will be impressed.

If you won because Aaron Rodgers threw a 50 yarder to Jordy Nelson to beat the Seahawks, (it's going to happen Week 14, just a prediction), your co-workers will be even more impressed. Certainly, if you know that Aaron Rodgers is also dating Olivia Munn, you will get huge bonus points.

Sign up, read up, and have some fun. Finally even if you have never drafted here is a fail-safe article that will make you look like a veteran.

Are you ready for some football!!!

Ladies, are you in a Fantasy Football League? Share your experiences, Jeffery, (e-mail jthalter@ywomen.biz) - what's the reaction from your family, colleagues, and friends?

Here's to a great season!

Jeffery Tobias Halter is a corporate gender strategist. The country's leading expert on engaging men to advance women, Jeffery is the President of YWomen, a strategic consulting company. A highly sought-after speaker, Jeffery is a TEDx speaker and frequently talks at industry and corporate events.